Finally a new post ! Now since I last said I would be doing them twice a week, which I still plan to do, my life has been crazy. I have been working like a slave and I know that’s no excuse but I have no time to do anything except eat and sleep, not to mention it is so difficult to take outfit photos at my house because there is no good places so I have to take them in this spot (shown below) I have found at my moms but I don’t go there that often so… I promise I will try to make time ! I have some content to post today as well as on Thursday and also in two weeks time I will be in France so expect some good things coming ! Once I’m back from France as well I won’t be working like a slave either so I will have time to post. P.s. sorry I always start my posts off with a rant I just feel like I have to explain.

Phew now that I got that out , I can tell you all about this outfit here
! Although it is still very much winter here in Canada (-14 ish right
now) this outfit works as long as you throw a jacket over it such as a
simple black blazer or leather jacket. It was hot in my house though and
I actually like the way it looks without a jacket so you get the gist
anyways, and also Spring is coming soon and this outfit is perfect for
it as well, it is pretty much a monochromatic version of the outfit I
posted in the summer but adding tights and boots. 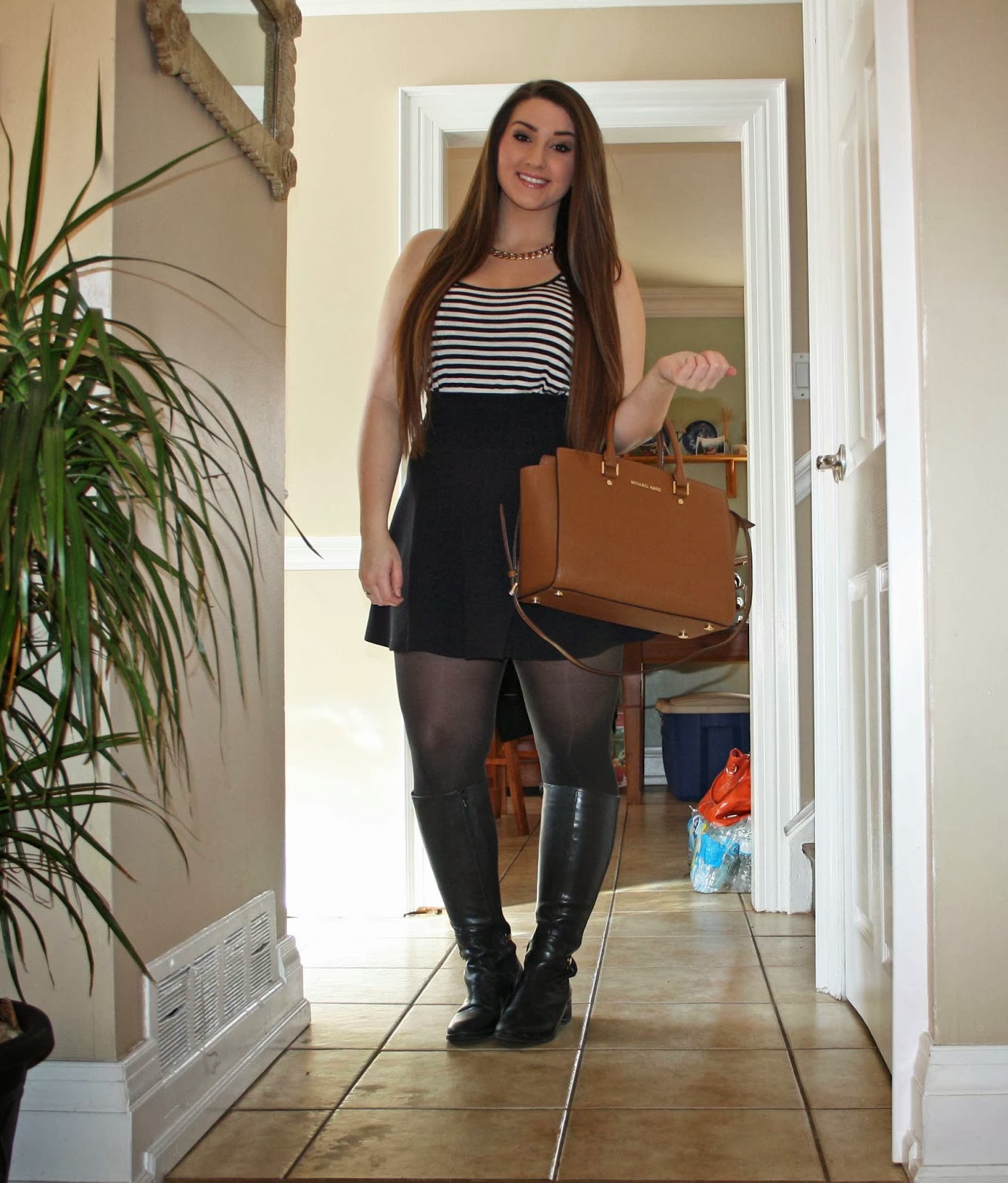 I have branched out a bit though with this chain statement-ish necklace, I usually stick to my dainty silver stuff but I think with all black or white even it looks really chic and trendy. I have seen a lot of people try to wear them with random things and it looks tacky but worn right they can be make everything come together in an outfit. I like the way it plays off the gold hardware on my purse and although you can’t see it in this photo there is gold hardware on my boots as well (they are shown in other posts if you are interested. 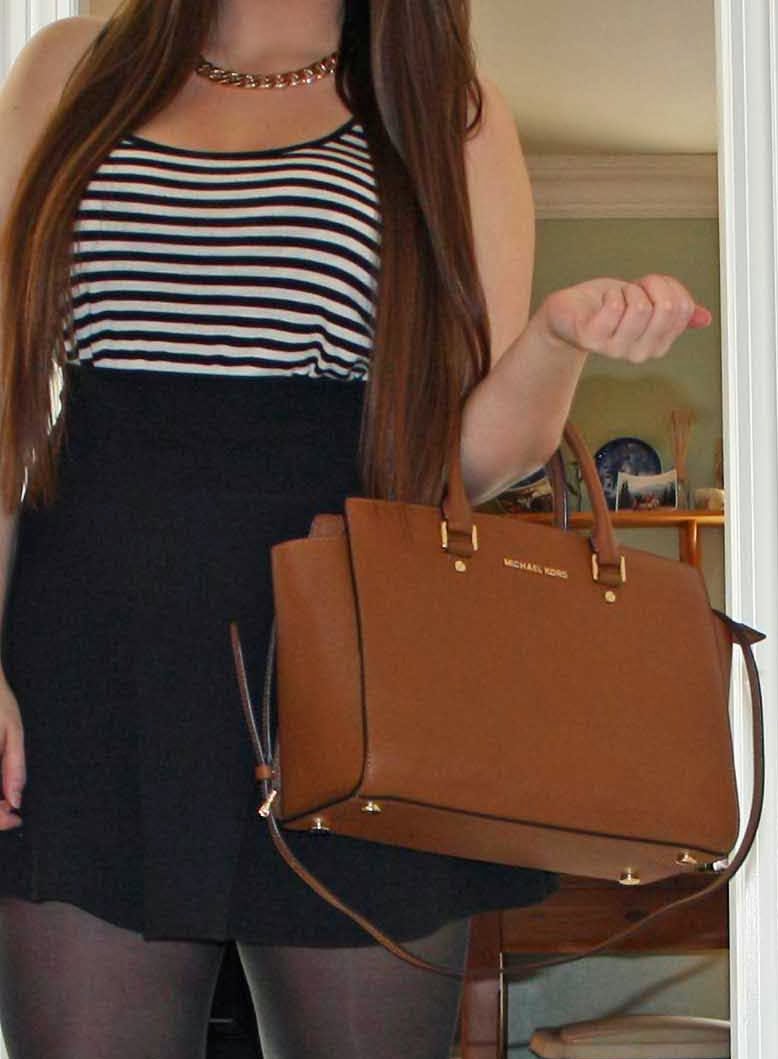 I chose to wear a skirt with this because it adds a more feminine touch which is more my style but it would also really well with leggings or jeans and a blazer which would be more of a menswear feel. I have also been channeling my inner Francophone and been wearing stripes like everyday because I am so excited to be going to France lol, but and paired with a skater skirt makes it even more romantic and French inspired. 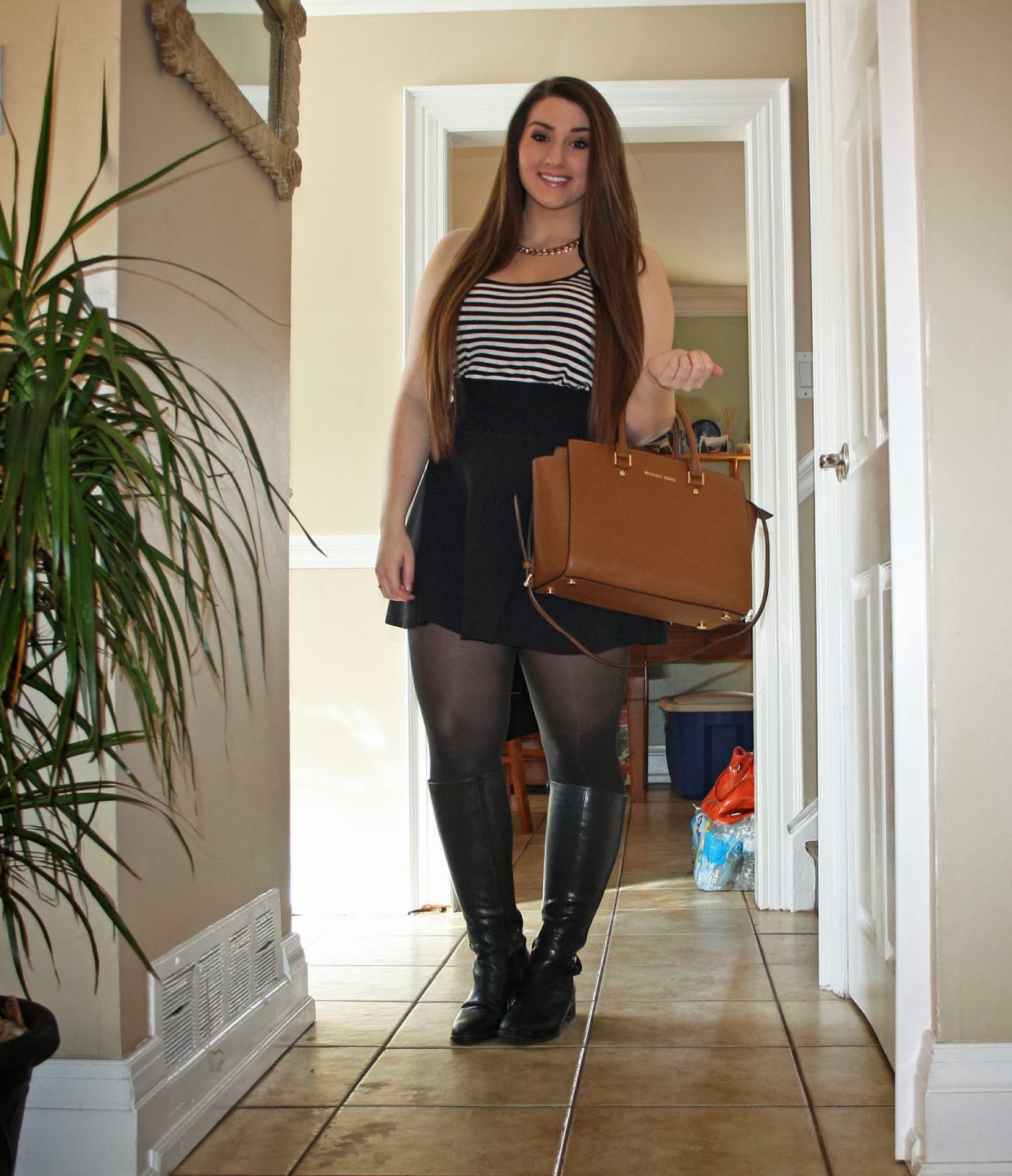 Also, I am very much aware of the fact that once again these photos look exactly the same as all the rest and I always do the same pose (which is just the way I look the best standing lol so it always happens naturally) but I have thought about other things I can do and although they aren’t that different they will change things up a little and be more interesting to look at maybe ? Haha I don’t know I just feel like people get bored of the same things really easily. I did try a little in this one though I have straight hair ! Which I haven’t had in a post for a while so I will switch things up in the next few posts to be more interesting for your eyeballs.

Anyways, Thanks for reading whoever you are and supporting me still although I suck, as you can see I really need to start posting more so that the posts aren’t so freaking long… I just really like writing I guess haha.

Love you, you beautiful human <3