Last post about my travels, it makes me so sad and I am so behind but I am just trying to drag these out as long as possible so I can keep reliving it as I have said before haha. So, on the last day we were in Nice we were all planning on going to Cannes. That morning my mom decided she really didn’t want to go, she just wanted to enjoy Nice some more and so Marina decided to stay back with her but Jay still wanted to go ( I did too but I was really fine doing whatever ) so, after our morning walk Jay and I decided that we would go to Cannes. It was about an hour and a half bus ride which kind of sucked because it was such a beautiful day and we spent 3 hrs on a bus but it was absolutely beautiful and completely worth it.

As soon as we got off the bus we pretty much just looked around and saw this walkway and decided to go up it because it looked like a pretty nice view at the top ( it went further to the right where there was an old castle looking thing).

The building across from the buildings you see in the photo above had this sick painting of different celebrities chillin on balconies. There were paintings like this all over too. On the way into Cannes on the bus there was a huge painting of Marilyn Monroe on the side of a building and I meant to take a photo of it on the way back but completely forgot. At the time I didn’t realize why they were there but Cannes is known mainly for the Cannes Film Festival which actually went on a couple days ago so it makes so much more sense  now lol. 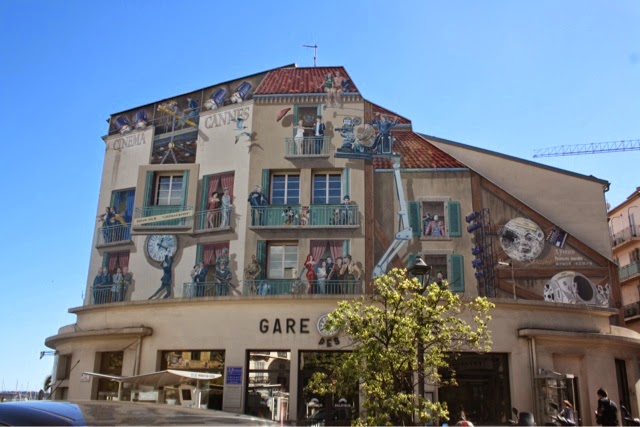 Here is a photo of the Castle that we saw from below and were heading for. 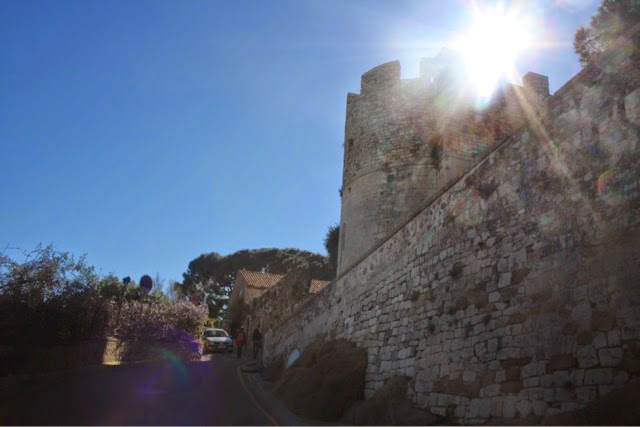 At the top outside of the Castle, which by the way they turned into a Museum and Church, there was a beautiful lookout / garden patio that was stunning and I would have gone to everyday if I lived near it. They also usually have tours of the tour but it was closed which was a real bummer but we still did go into both the Museum and Church which you will see photos of below. The view from the lookout was absolutely amazing though. It looks similar to the view in Nice but there is definitely not as many pastel houses in Cannes, they are more browns and whites for sure. It was also SO WINDY this day, my dress kept flying up and I was getting real frustrated. 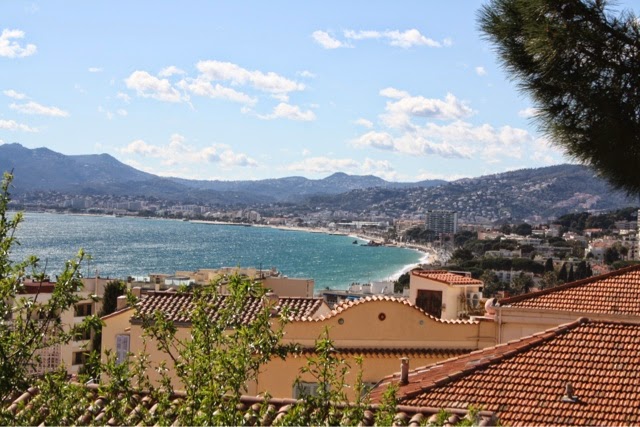 I was so happy I wore this dress this day lol, I bought it specifically to wear in France because it looks very Southern France to me and I didn’t think I would get a chance to wear it because it was chiller for a couple days but I’m super happy I wore it to Cannes because as weird as this might be it matched the coloring in the garden patio thing we were in perfectly. These photos like embody France, I think anyways and are my favorite ones that were taken of me on the trip as well. 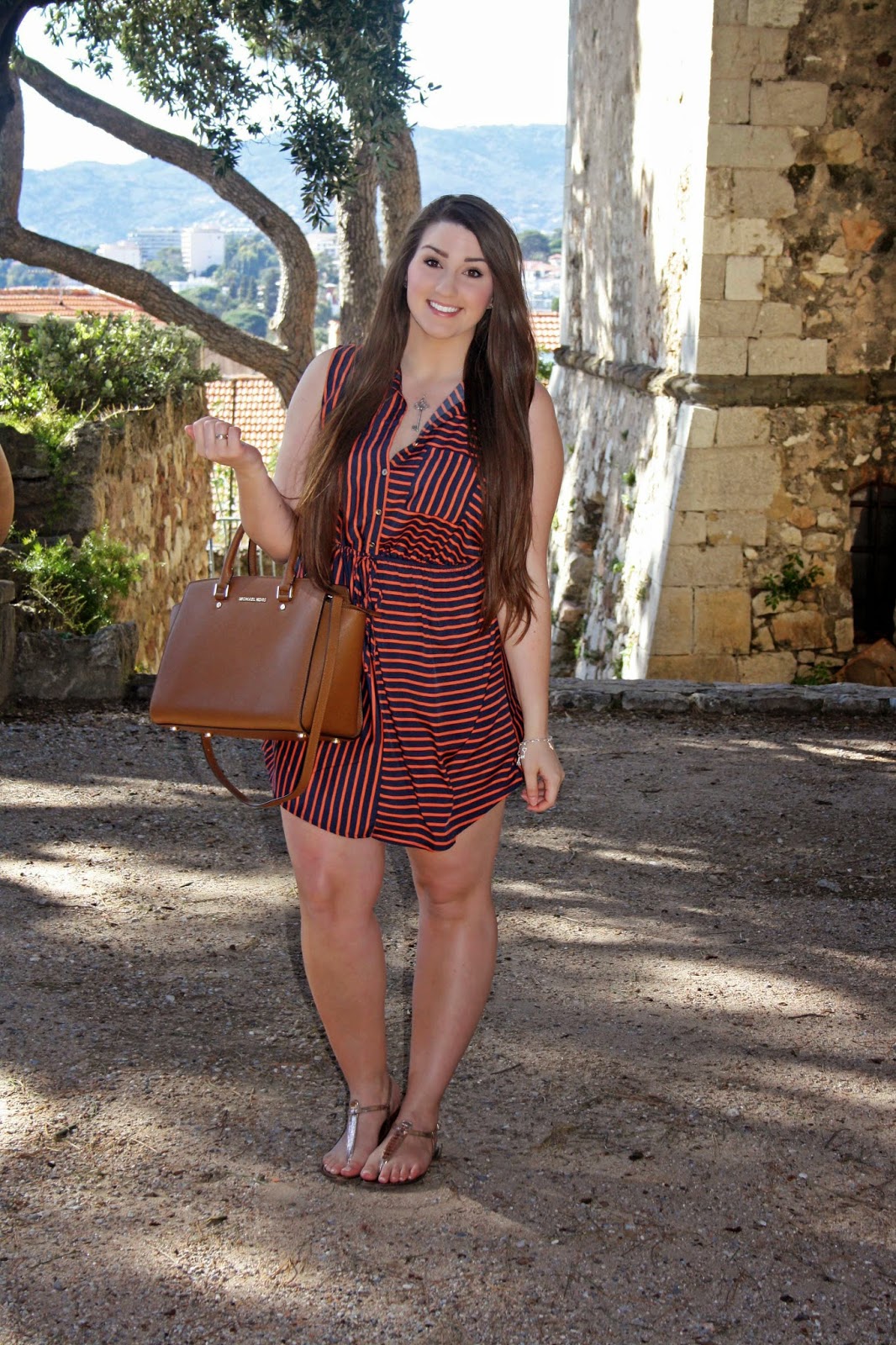 The dress is so interesting too because of the stripes going horizontal and vertical on either sides. I talked about this in the post that I hauled the dress in too but the vertical stripes make the eyes go up and down and make you look taller and leaner, while horizontal stripes usually make you look wider but because it’s broken up in this dress it doesn’t. See what I mean about the colors matching the background perfectly though !? See that pot off to the left, it literally matches my purse exactly… It was meant to be haha. 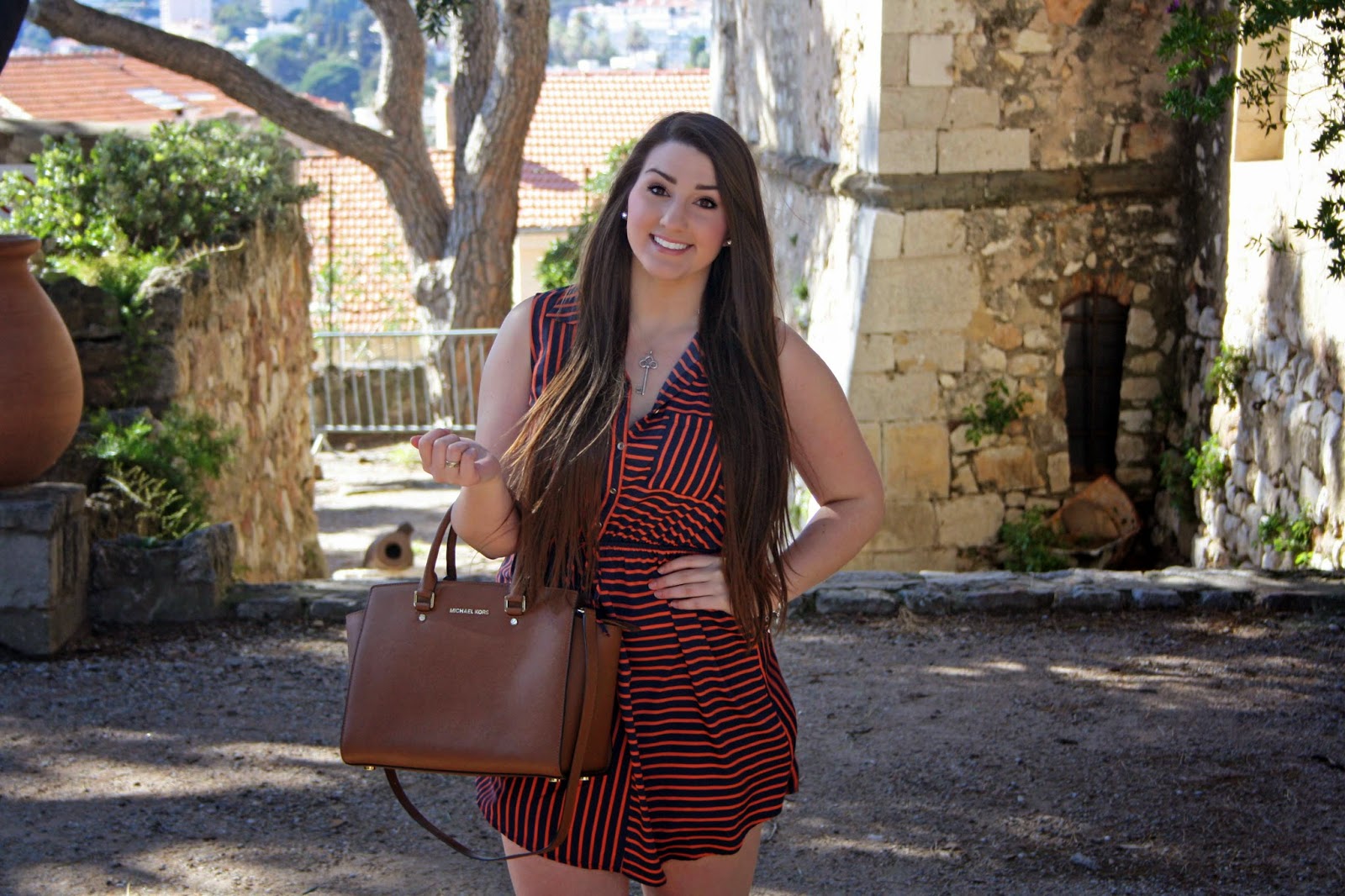 Shoes: Sam Edelman Gigi $39.99 CAN on sale (finally found out the name)

Here is the outside of the Church side of the Castle. I love how in pretty much every old Castle/ Forte type building there are arrow slots haha, like Europe is so much cooler and full of so much more history than anywhere else for sure. 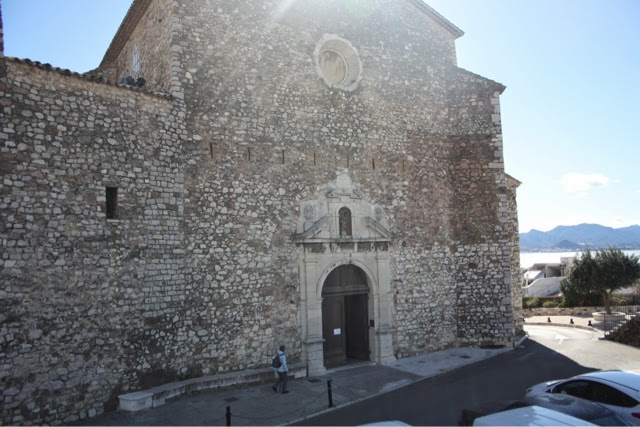 We went up onto this wall where archers would have defended the Castle from back in the day and my skirt was blowing around like no tomorrow and there were people walking below… It was horrid. I was wearing shorts of course but they go up my butt just as much as my underwear anyways so essentially a whole lot of French people have seen my bum. 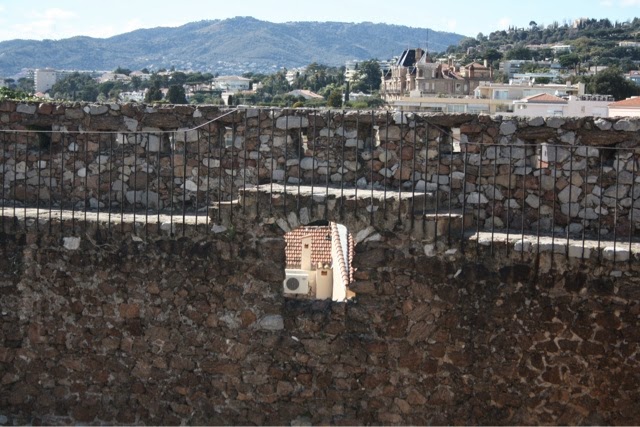 At the top platform there were a whole bunch of people just sitting around chillin on looking over this view and most of them were locals too… I wish I had this view everyday ! Like imagine ! So lucky. You can see the beach all the way across the harbor which Jay & I wanted to go see because the beaches in Cannes are famous, but it was a super long walk from the bus. Once we got down from the hill we were on the bus was there and leaving in a few minutes, so we decided to pass. You can see the entire Harbor though and all of Cannes from this view which is worth the 3 hour journey itself. The sky looks like a painting too, the clouds are so perfect. Also, you can see what I mean about no pastel houses just different shades of brown and white. I think that Cannes looks a little bit like Italy as well, you can see the Italian influences in the rooftops, colors and greenery but the building shapes and just the city layout overall are very French it is a very beautiful place that’s for sure. 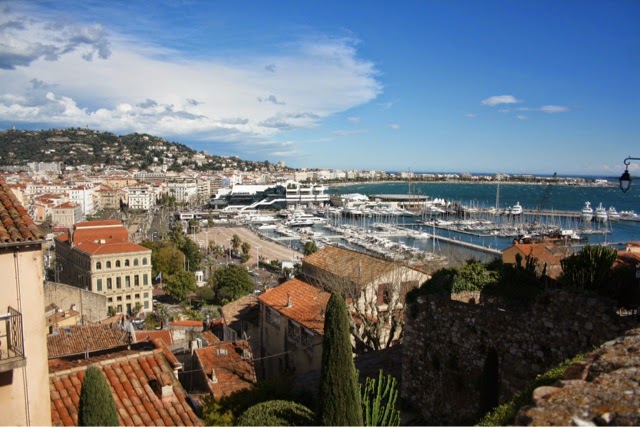 Here is some photos of inside the Church which was absolutely beautiful and had amazing artwork in it… It was like a museum in itself and of course the architecture was amazing of course. 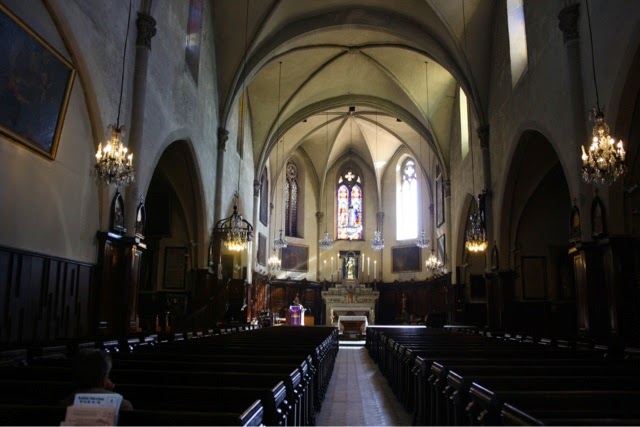 Out of everything in the church I was most amazed by the sparkly chandeliers of course, they’re just so magical I love chandeliers something fierce. I took like 5 photos of different ones but I will only add one here lol because I feel like most people aren’t as amused by chandeliers as I am. 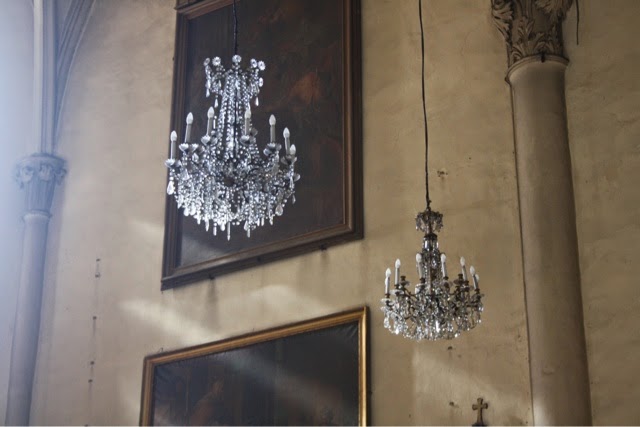 Like when have you been in a church this nice in Canada? Only in Europe. I mean I don’t actually go to Church ever… I think I have been in maybe two in my life but I don’t remember there being amazing artwork in them. 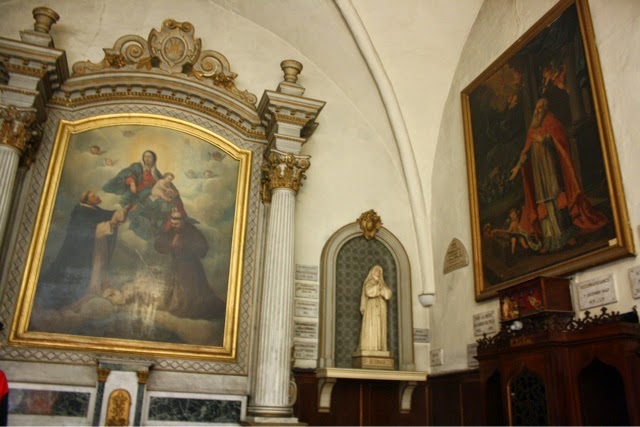 Here are a few photos from the Musee De La Castre on the other side of the Castle, and the entire thing wasn’t even only 3 sections which I guess they only open the whole thing during the summer ( busy season ) but it was still really cool.

This crown was from an African chief I’m pretty sure or Aztec ? I’m almost positive it was Africa though. It was made of either bone or ivory too I don’t remember but either way it’s crazy that people put so much effort into making everything back then. 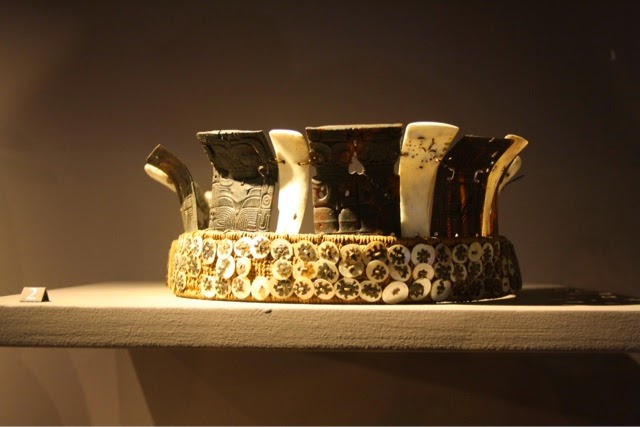 Here is a sarcophagus which looks like someone who was still alive and was trying to break out haha. The coolest thing about this museum is still that it is in a Castle though, like look at the walls and the floor, this room which was Egypt and Greece was the only one like this though but it was like a little cave nook. 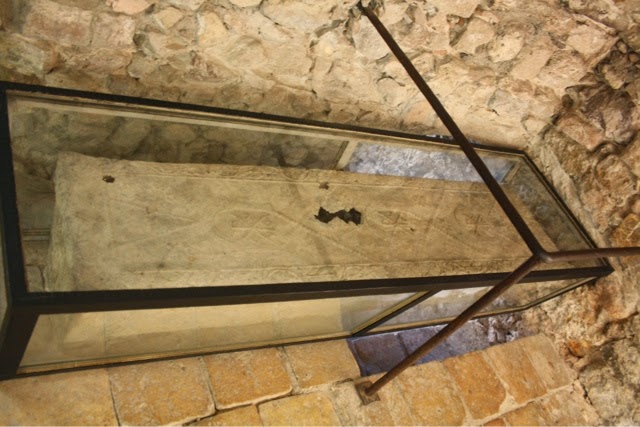 Marble busts of some famous guys. 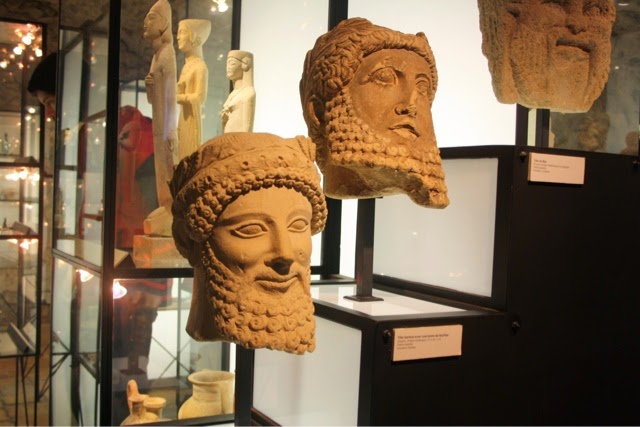 Here is the tower that they usually do tours of during busy season that we couldn’t go up in, but the French flag flying makes this look so old and majestic like it is literally the 1600s, it would have been super cool to go up in a Castle tower and feel like Rapunzel but oh well, next time. 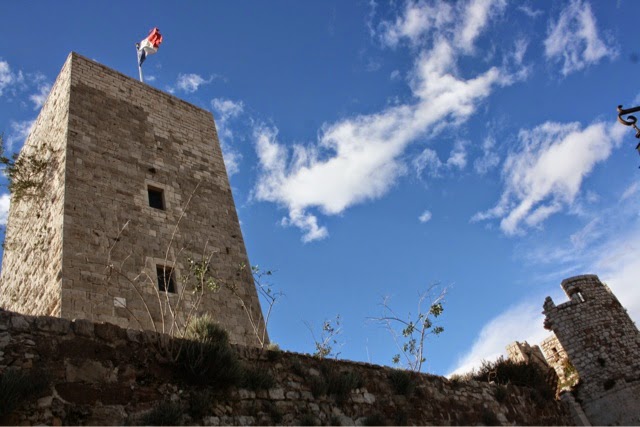 THIS ! On the way back down from the top we went a different way and came across this… Like literally no sign or anything just this. My theory is that it was the dungeon because it was still pretty close to the castle but just a bit further down… barred windows and this scary looking executioner man, definitely something like that. 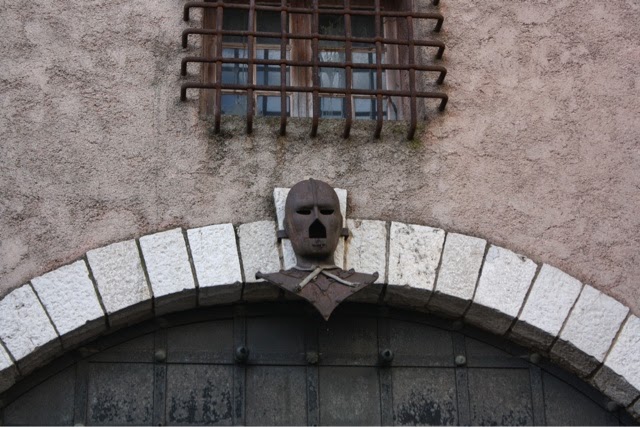 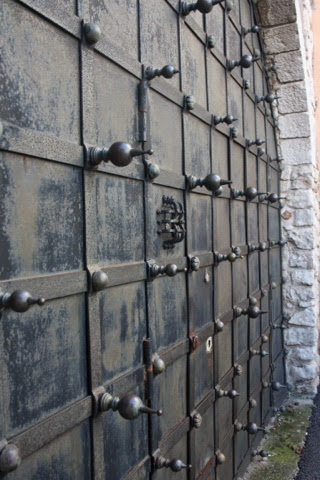 Right before we got back on the bus we just stopped to look at the harbor for a bit it is just so beautiful. I miss it so much and I am so sad that this is the last photo I am leaving you with from France  but it is also a beautiful photo to keep in your memory. 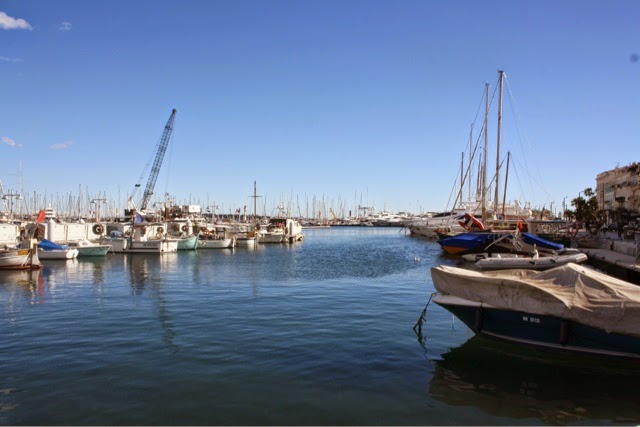 I love France and am going to head back as soon as possible as I have said numerous times. France, I love you and I hope to see you again sooner than later, I had the most life changing most amazing trip of my life and it has opened up my eyes so much with how much the world has to offer and how much of a magical place it really is <3