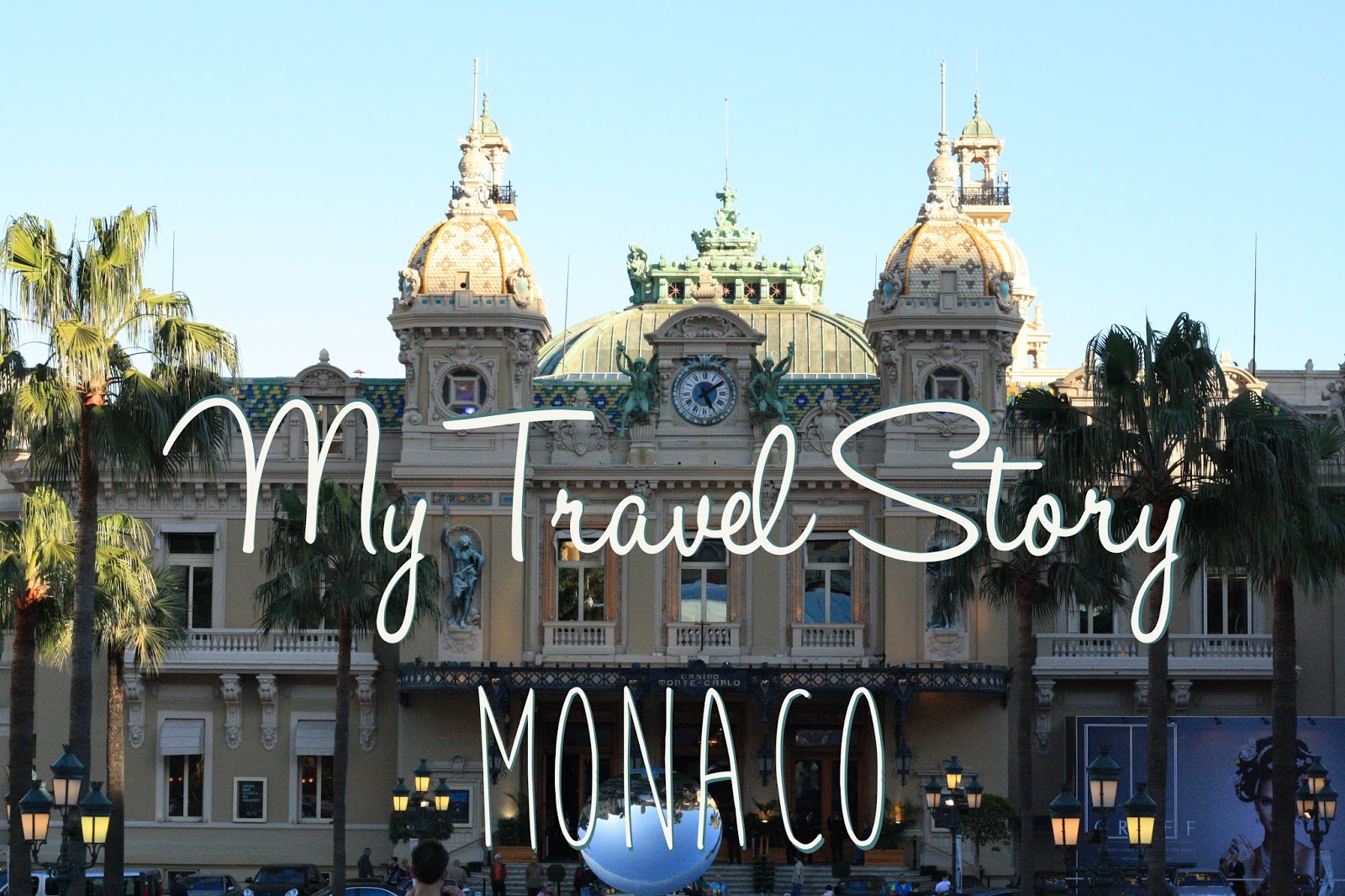 Okay, So I think it is safe to say that I am the worst blogger in the entire world lol. But you know what I’m going to change that starting today. I keep making excuses, which are pretty valid ones honestly, but I need to find away around them and find time to do the things that I enjoy doing. Anyways, I know our trip to France was now three months ago, but I am still going to get these posts up because why not. I said I was going to do posts about our trip and so I am still going to do that. Plus now maybe some of you will have forgotten what these photos look like and will be interested to see them again haha ? Also, I’m trying out this new style with a main photo at the top with a title ? Let me know if you like it or not, but I think I am digging it.

The third day of our trip we decided to head to Monaco for the day ( what is a trip to Nice without going to Monaco right ) but before we heading onto the bus we walked over to our favorite cafe for some morning croissants and cappuccinos of course… two of those croissants and cappuccinos might be mine…yes I had two of each every morning what about it they’re freakin’ delicious okay. But seriously, this place is the best place to get bread, croissants, pretty much any pastry and cappuccinos so if your in nice I suggest going there… I do not know what it is called unfortunately, I took a photo while there specifically to know the name but I can’t read it because it was at a weird angle, dang. It is in Vieux Nice though and I recognize it when I see it but that doesn’t help any of you so sorry about that…just wander around Old Nice until you find a bakery on a corner with an older man working and probably an older lady or a younger lady as well and that’s the place haha. 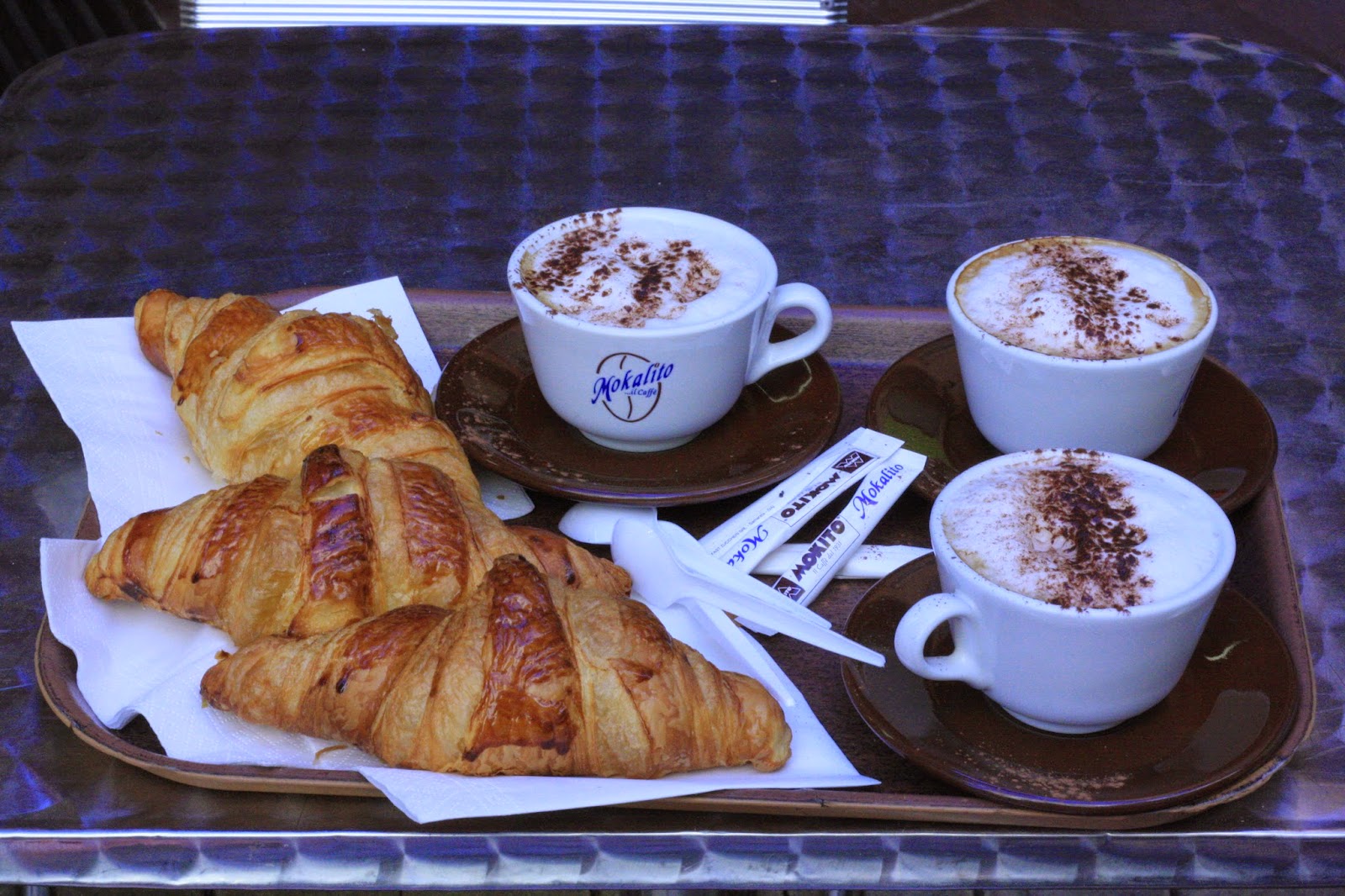 On the way to the bus stop we stopped at Footlocker quickly so I could pick up some shoes because my feet were killing and I didn’t bring any serious walking shoes. I had already wanted this exact pair of shoes for a while so it was easy to just run in and grab them and I am super glad I did because they are extremely comfortable and I wear them all the time now; they are the Nike Roche Runs for anyone who is wondering and doesn’t already know that haha. Once my feet were situated we headed to the bus and made our way to Monaco. I would say this was probably the hottest day we had or at least one of the hottest days; I was sweating my bum off the entire time we were walking around but it was absolutely beautiful and we couldn’t have asked for better weather.

The first thing we did when we got there was just walk not towards the Casino right away but over to the port and walked around there for a little while. It’s really interesting watching the people getting the yachts ready to go, cleaning and what not and just bustling around doing their own thing. The yachts are all extremely beautiful as well so looking at them is never boring. Of course the beautiful yachts and Sea happened to be a perfect spot to take some outfit photos so Jay got the lovely task of doing that for me ( he is honestly the best guy I feel so bad for him because I make him take photos of my everywhere haha, so Jay if you happen to be reading this thank you so much your the best I love you ). 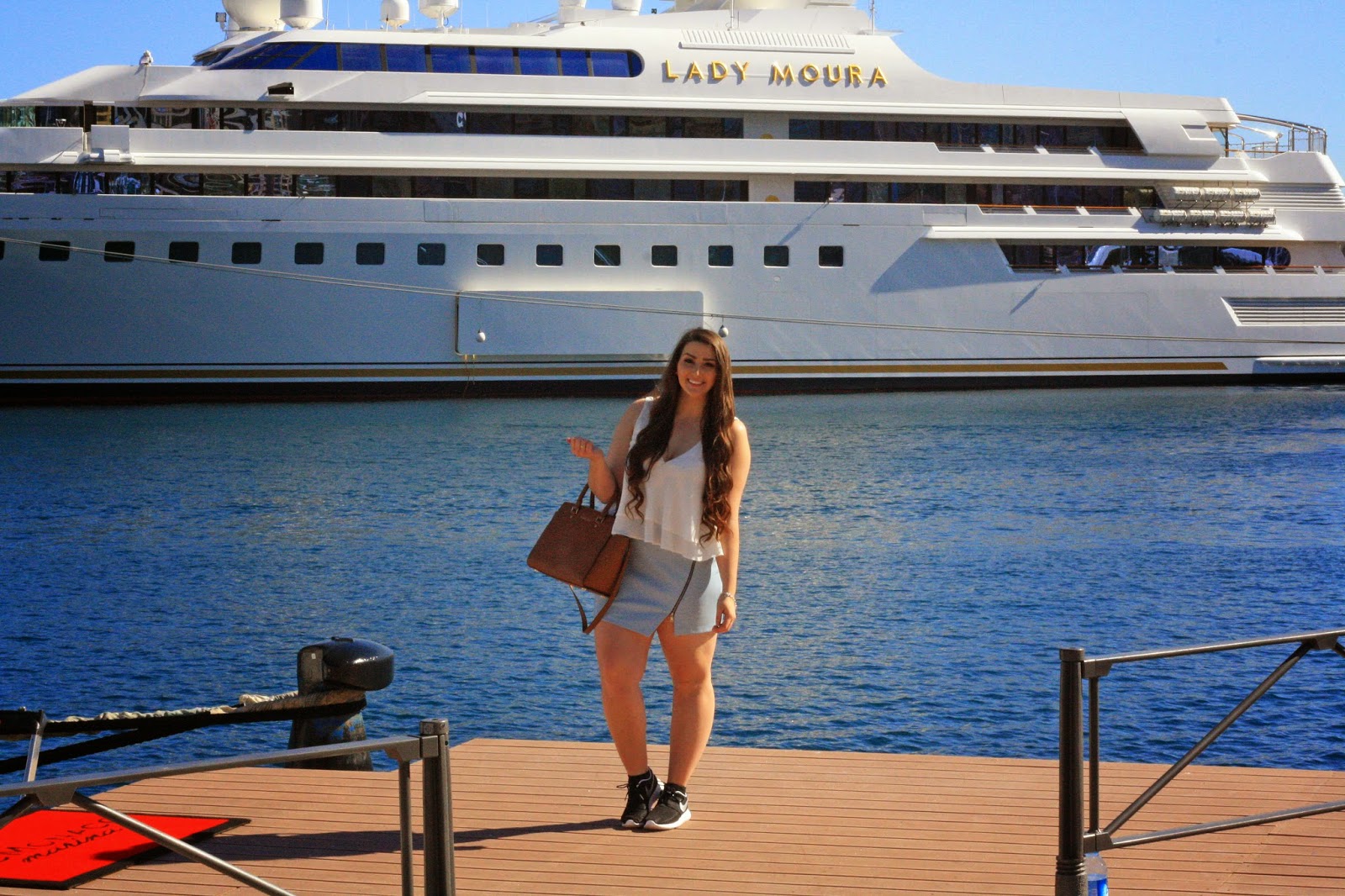 While walking along the pier we saw this beautiful little Ferrari and Jay told me to take a photo so I did even though it was a tad awkward because people were around but hey whatever. Only in Monaco would you be looking at Yachts and see a Ferrari as well. 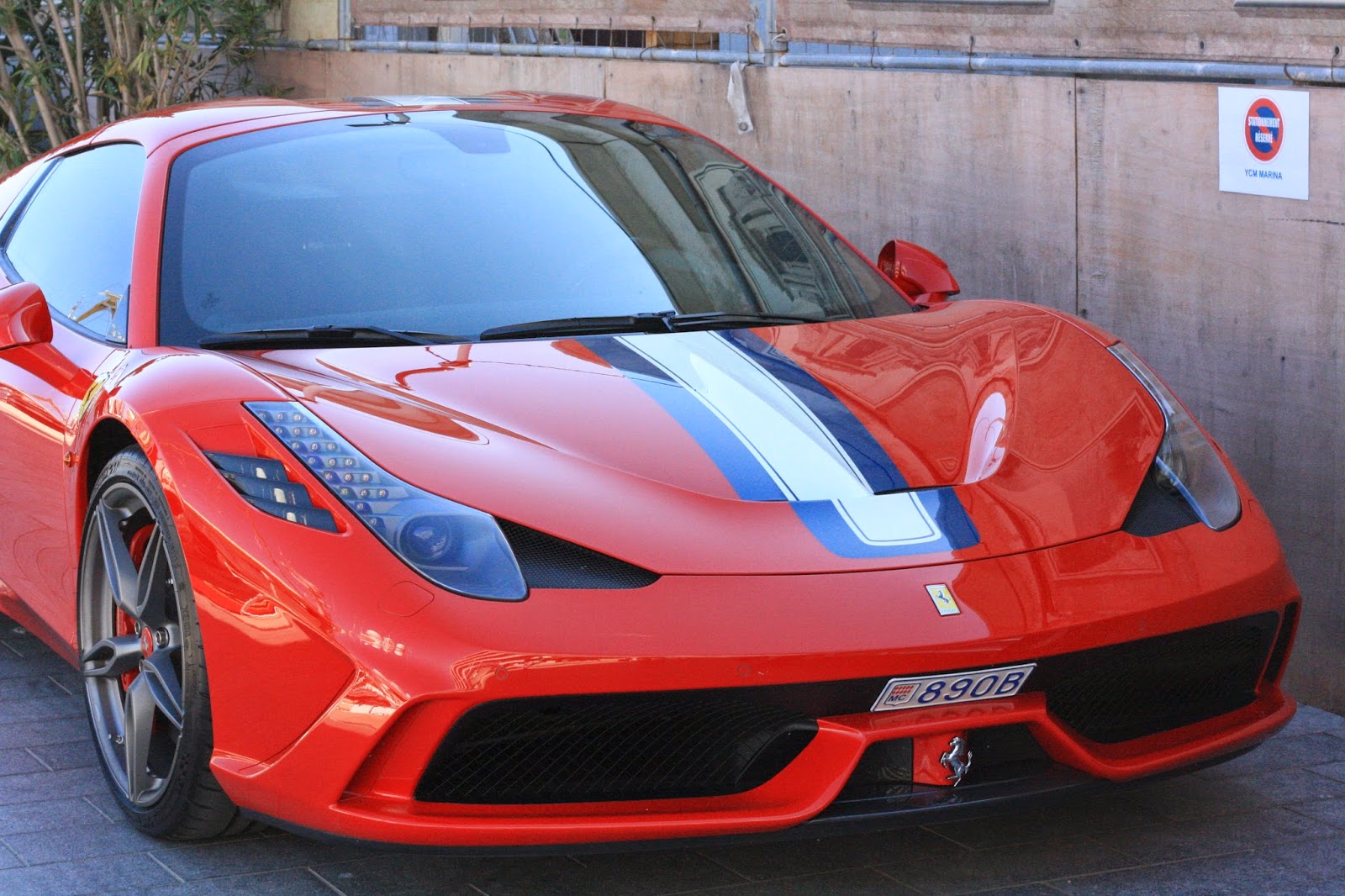 For my outfit this day I knew that I was going to be buying the shoes and we would be walking a lot so I decided to go with a more girly but still modern look so that the shoes would balance everything out instead of overtake the outfit or make it overly sporty. I originally wanted to wear heels with this outfit, the blue and black ones that I have, but that would have been way to uncomfortable to walk around in all day. I was going to wear sandals but then I thought of buying these shoes and they were perfect for this look. The only thing that I regretted was wearing this skirt because it is faux leather and I was sweating so much in it, but I love the outfit and how these photos turned out so I’m glad I stuck to it; other than sweating a whole lot I was super comfortable all day. 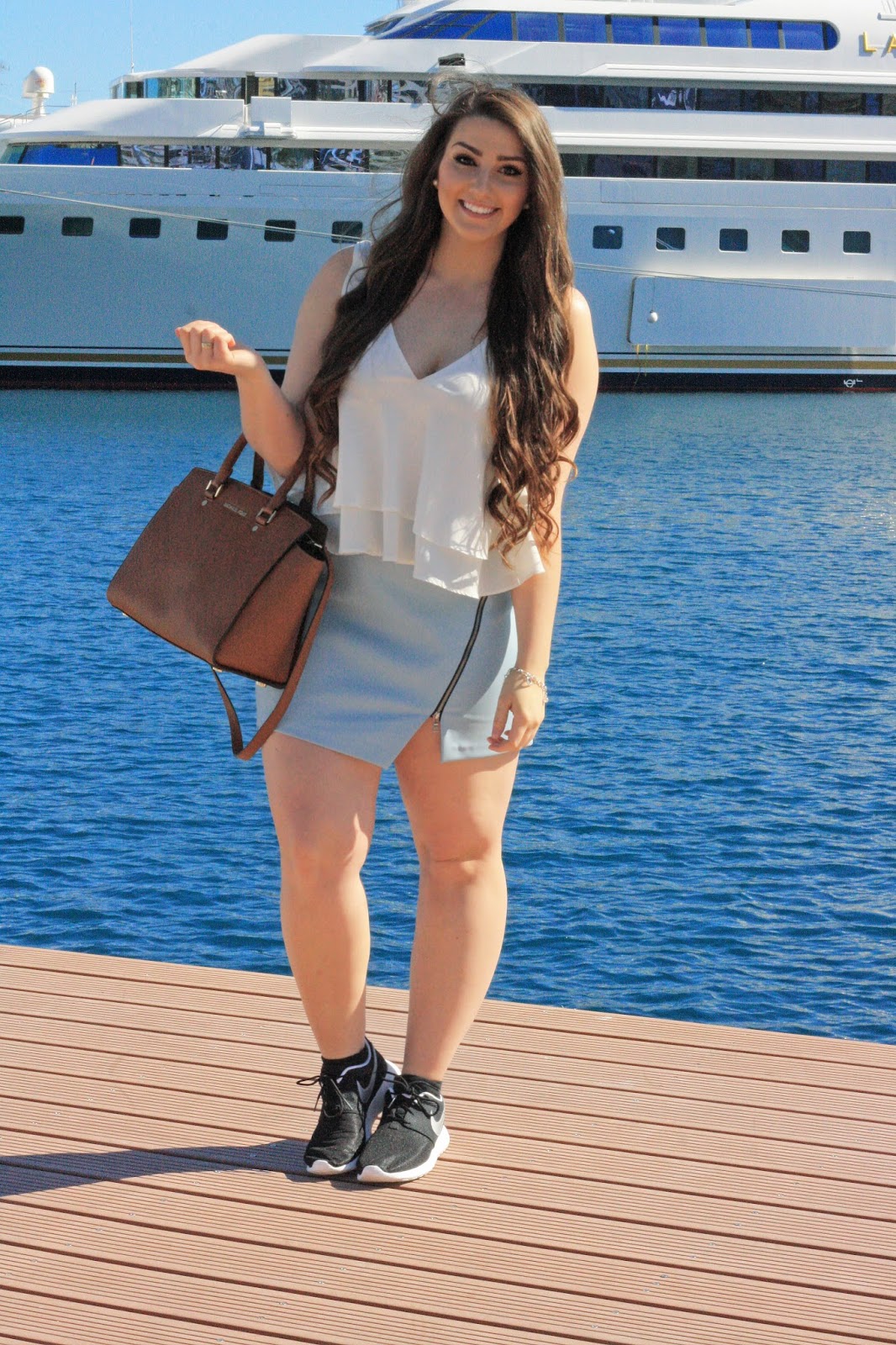 Once we were finished at the pier we decided to walk around the Casino grounds and take some more photos and just enjoy the day outside for a while. Of course I took a photo of Chanel again because I think this has got to be the most beautiful Chanel there is. 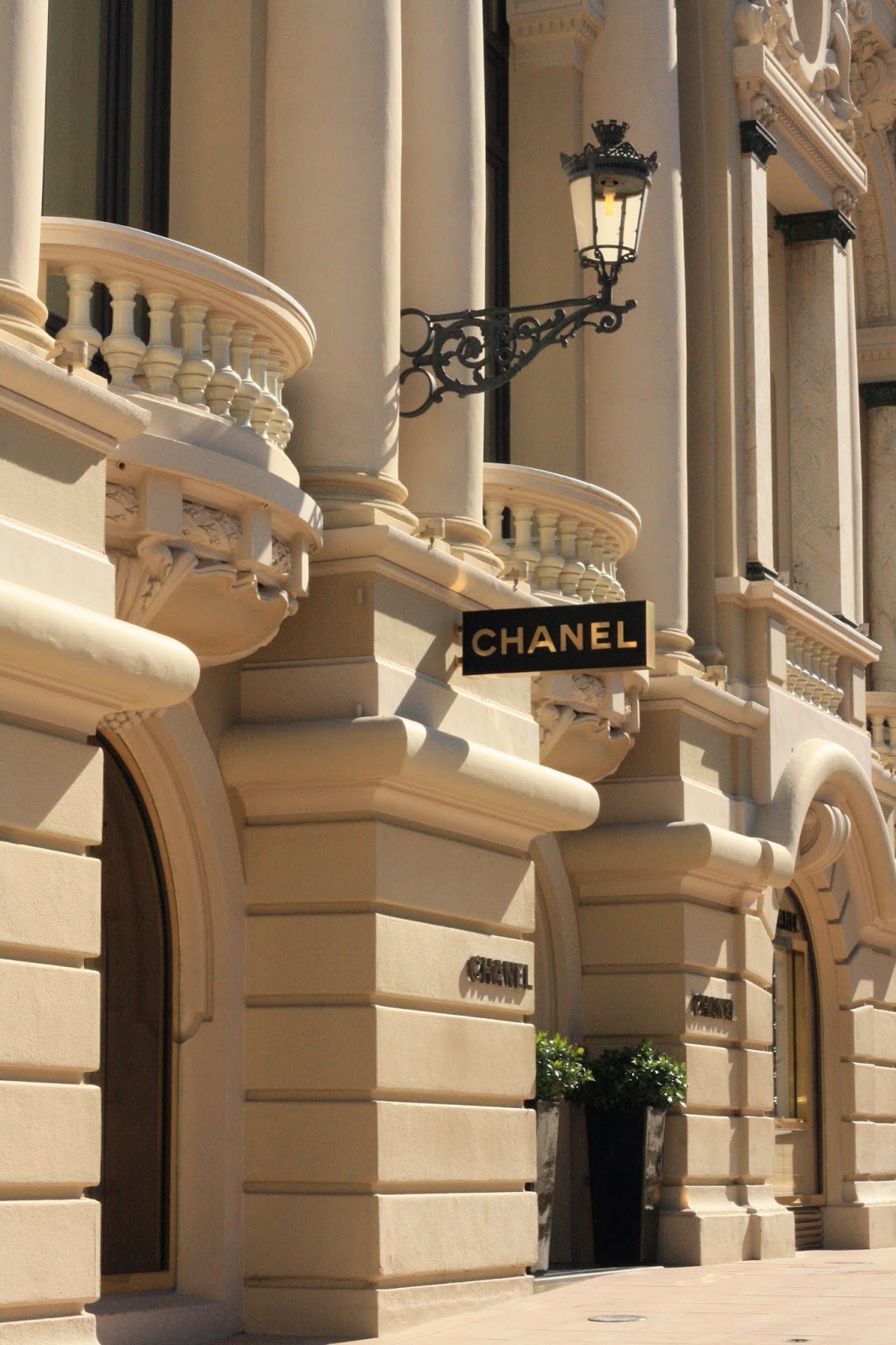 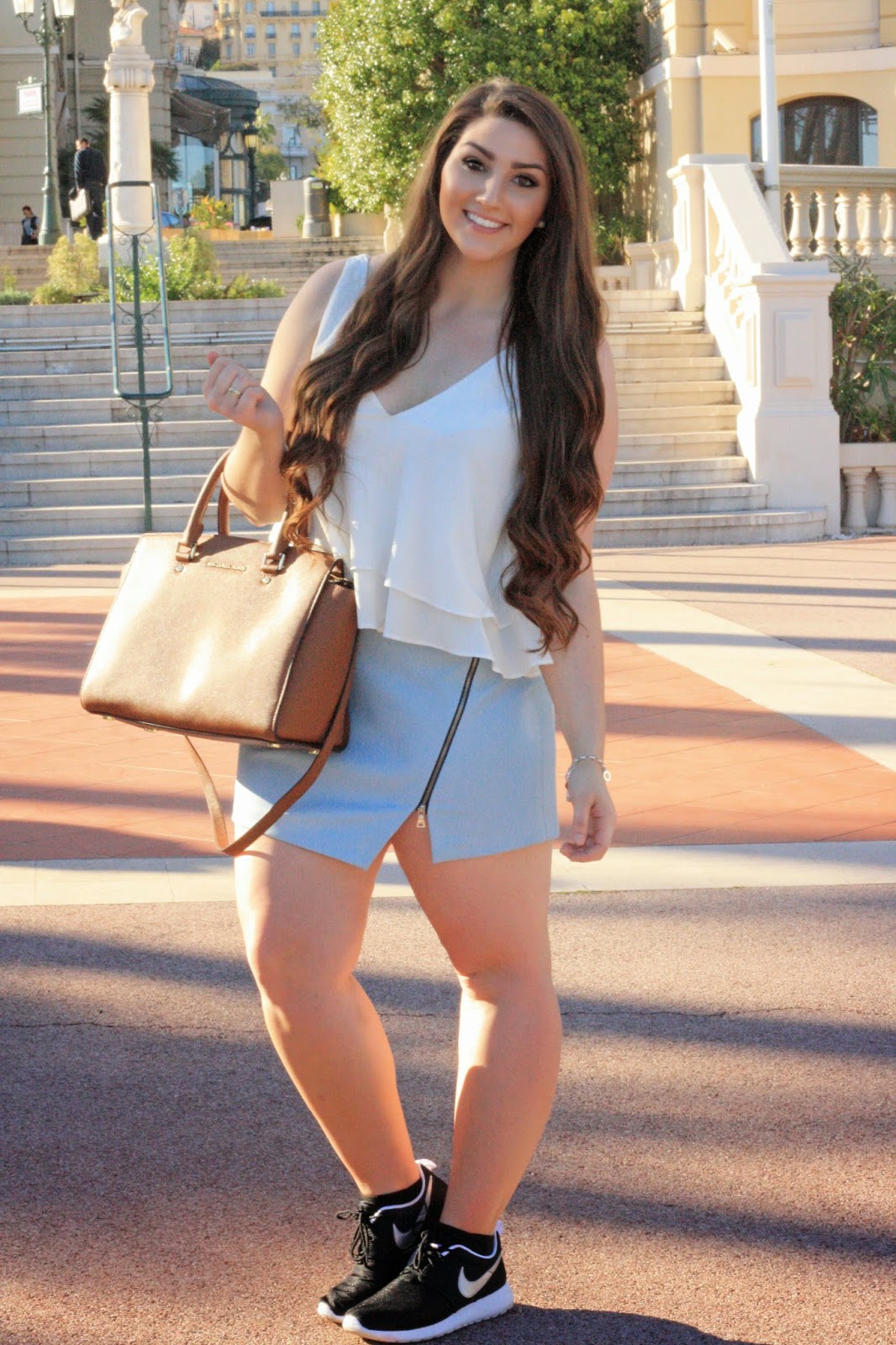 Once we were feeling a little parched we decided to sit at the Cafe De Paris which is right outside of the Casino. I felt like we were in a movie almost. There were big men in suits smoking cigars and a bunch of ladies all done up with big floppy hats all enjoying drinks and smoking to their hearts content. We just had some wine, but some of the drinks on the menu were extremely expensive ( a pina colada was 20 euros… which is like 30 dollars ) but what can you expect right in front of the Monte Carlo Casino, prices are obviously outrageous. There was also an inside to the building where you could get dinner… I wouldn’t even want to look at the prices there. It was a really great experience though and just the feeling of being there was worth it, it is a place that I feel Hemingway would have been to and wrote about. Jay went into the Casino while we were doing this and had a drink in the Casino as well as just looked around. I was going to but I just wanted to sit and have a drink at the Cafe. He said it was amazing inside though all old and rustic looking. 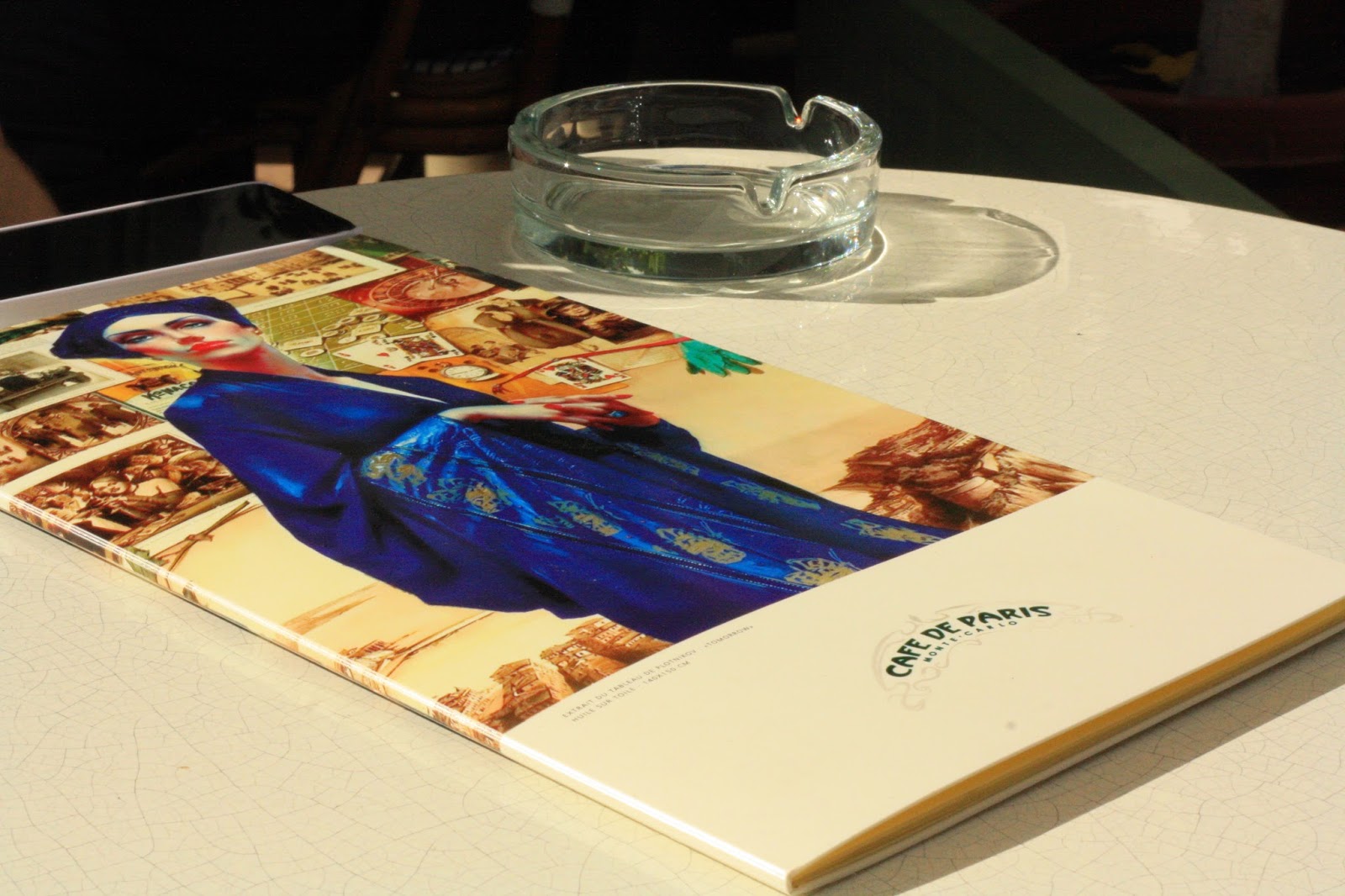 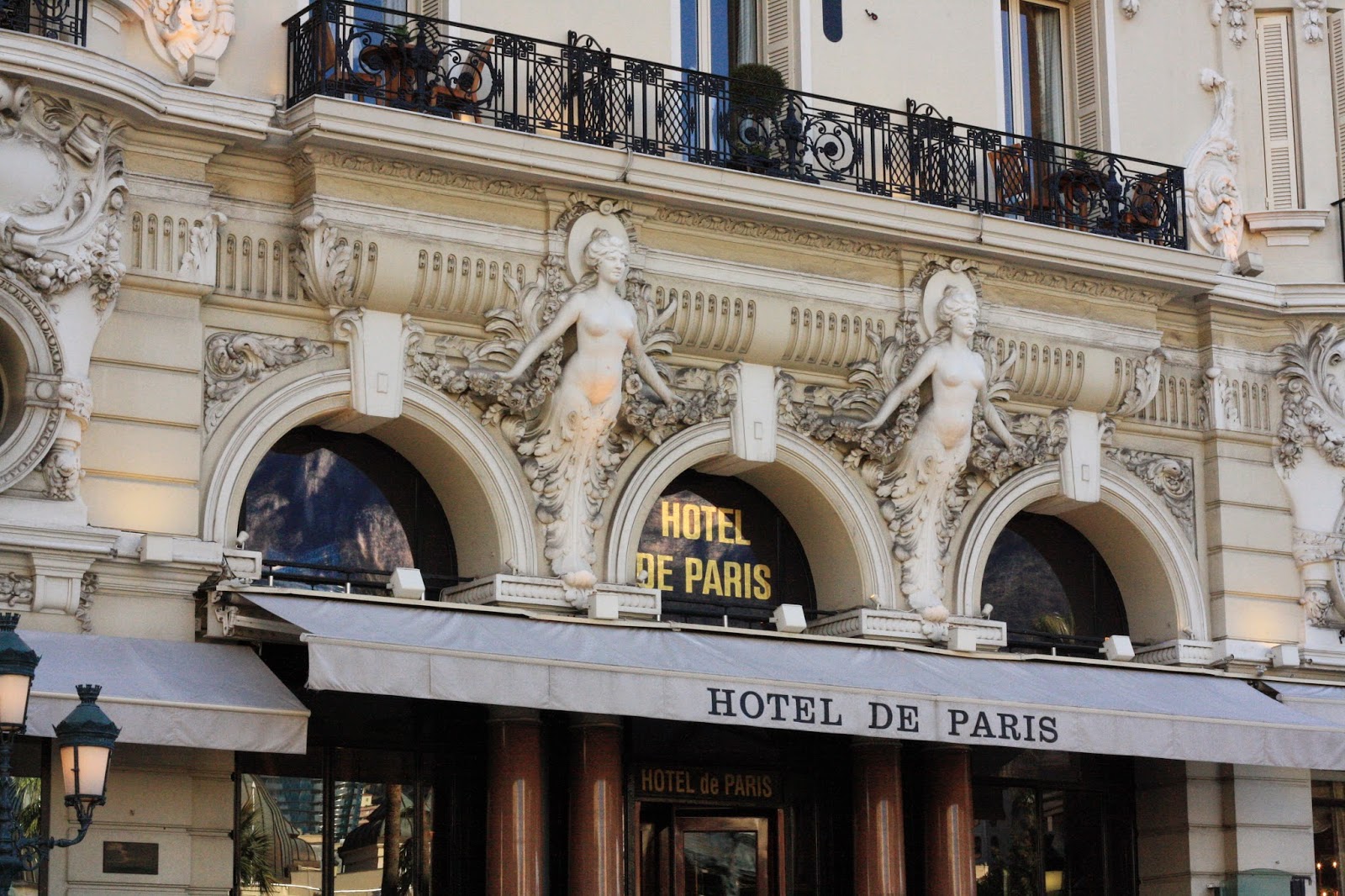 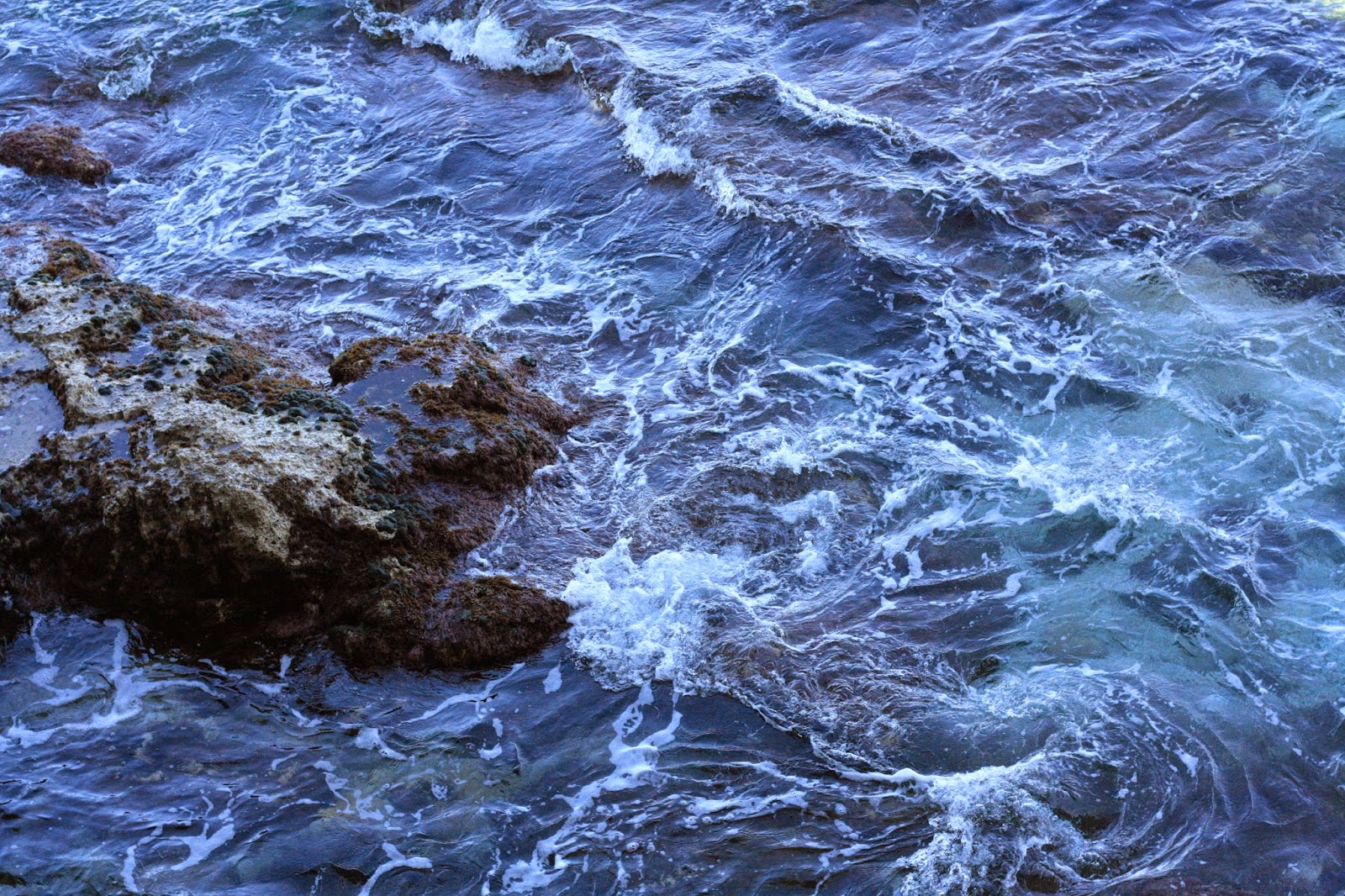 After our drink we walked along the back section a bit more and just take in the scenery and take some more photos. The main walkway extending from this section was closed, where we took full photos of the Casino last year which was a shame because I really wanted photos there but we could not so we just hung around this area for a little while. Jay also got this entire outfit in Nice and I think he looks pretty good if you ask me, I am in love with that shirt and love every time he wears it. 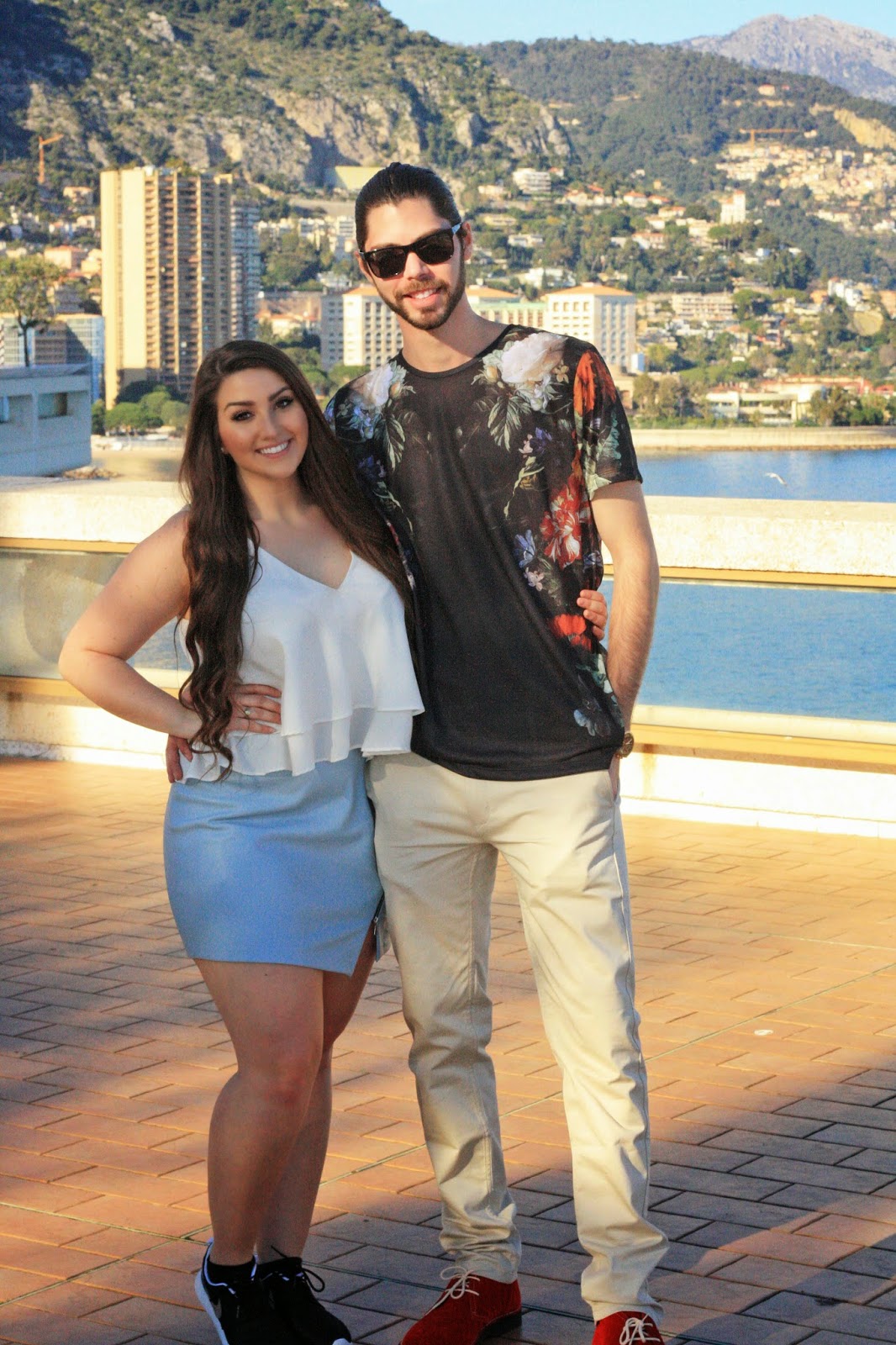 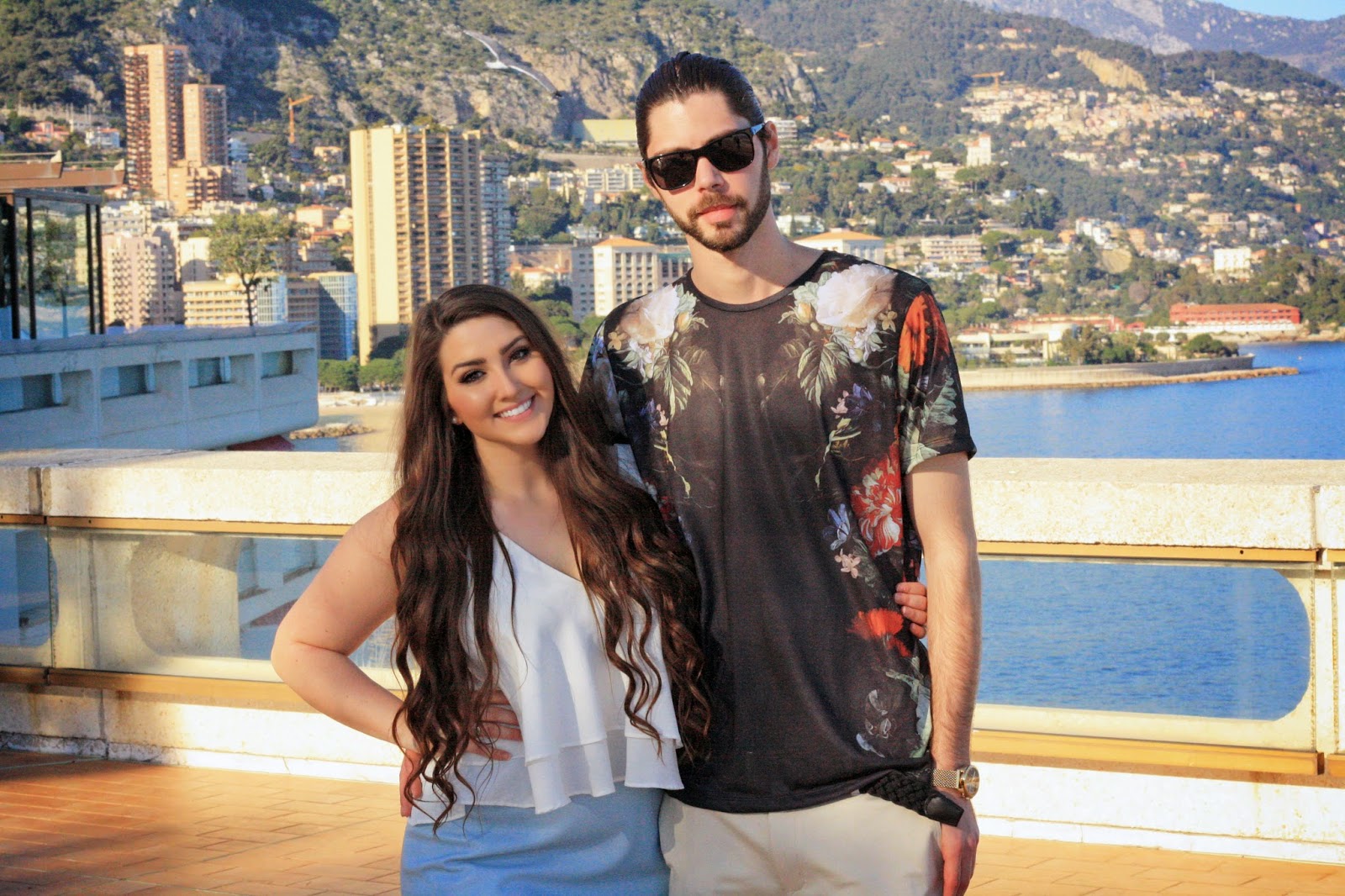 Believe it or not this was actually two photos that I photoshopped together because it would not fit in the frame of my lens haha. I wanted to give the full effect of how beautiful it actually looks though from this spot that we were hanging out at. I love the South of France so much, it is so amazing ugh all of the views are just so amazing, like look at that… and it looks like that everywhere. I am so jealous I don’t live there. Although funny story the one night we went to the bar these girls were on the Promenade with us and were saying ” why would you come here it’s so boring” we’re like UMM HELLO LOOK AROUND, but I guess everyone takes for granted where they are or have been their entire lives. I still can’t imagine taking views like that for granted but… it’s the way we’re programmed I think. 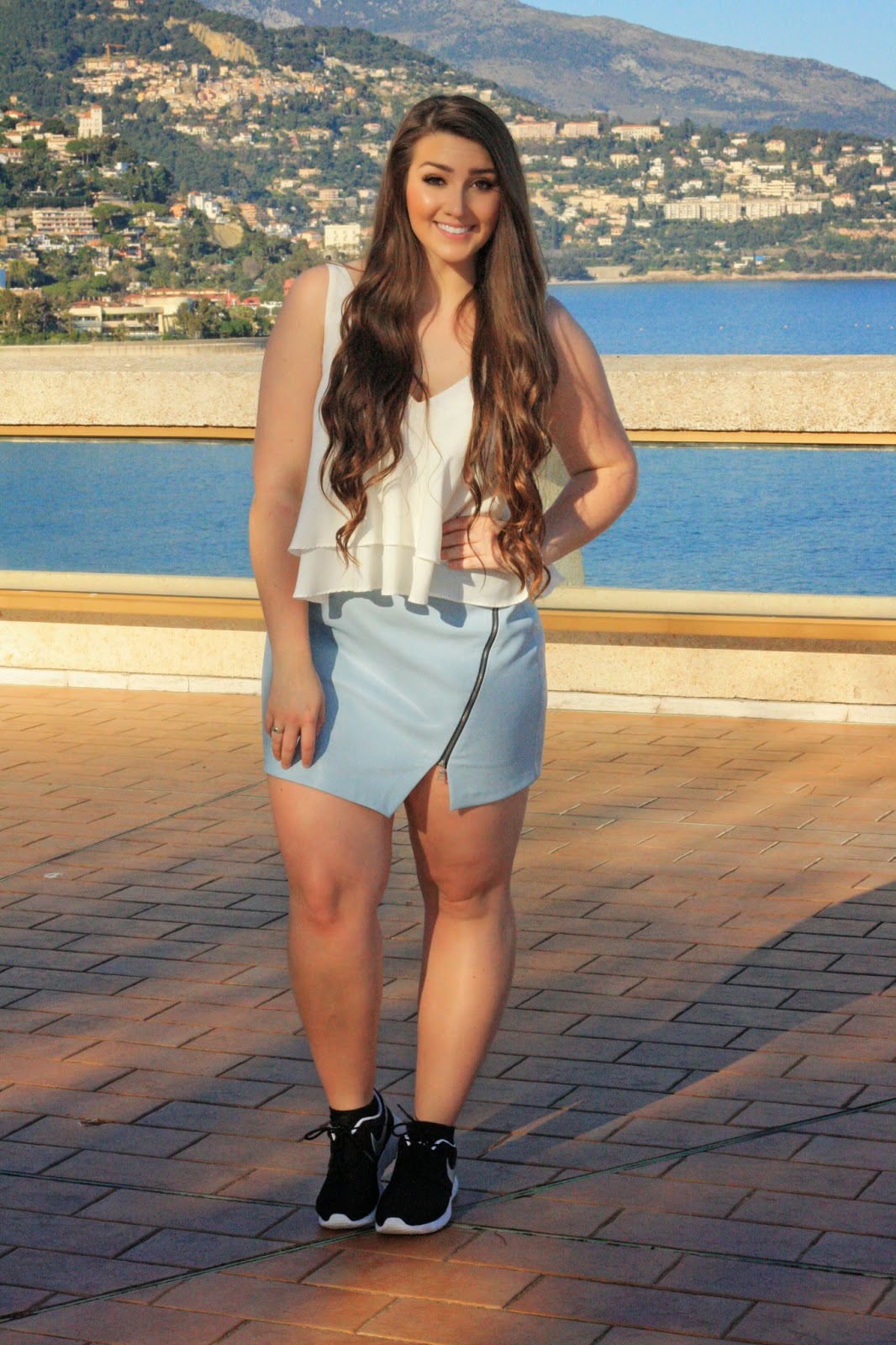 This beautiful door I took a photo of last year as well but it deserved another photo-op because look at it, it’s amazing. 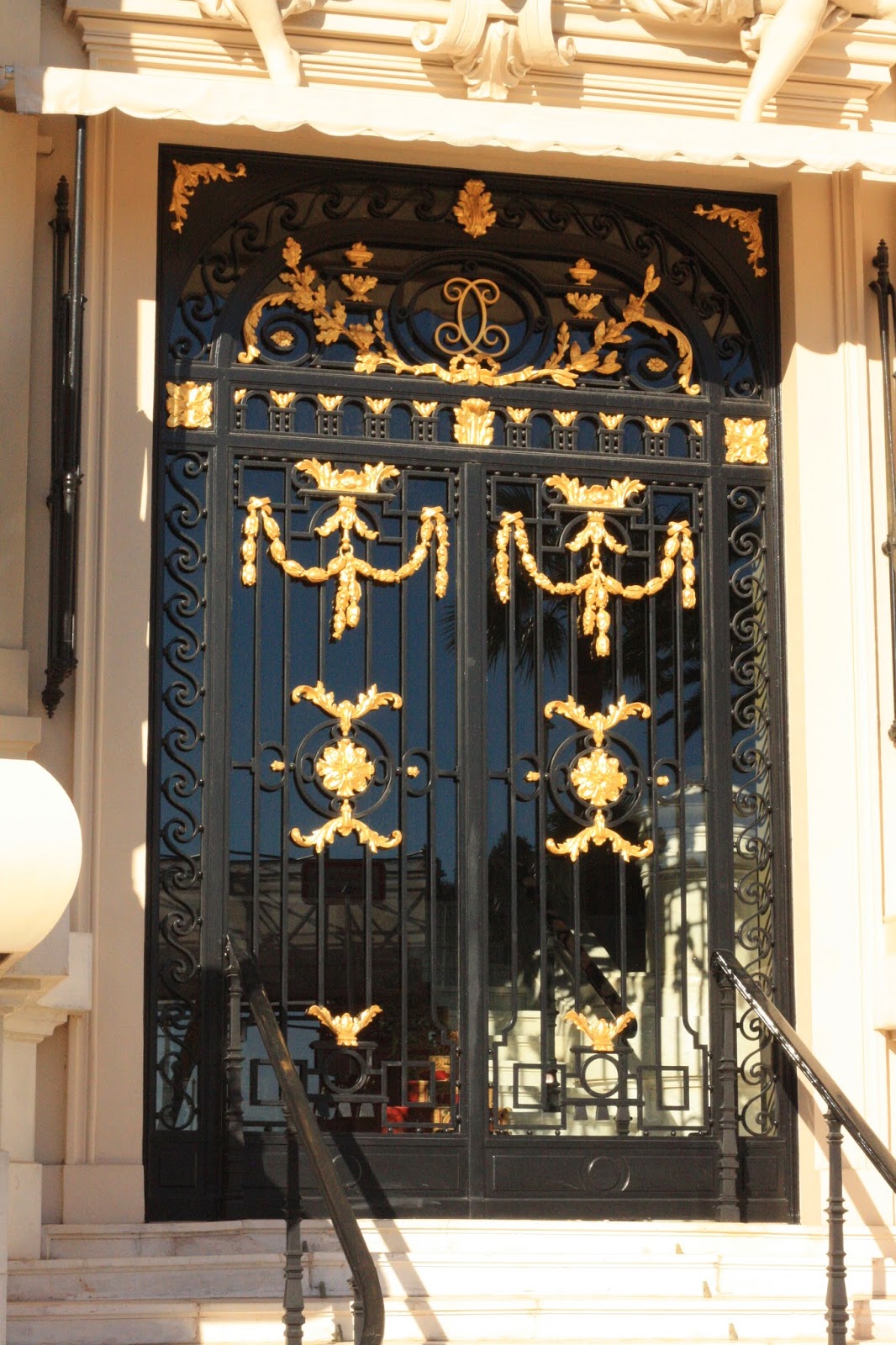 And the last photo I had taken from this day was the best view I could get of the back of the building, which was neither straight on or a full view of it, but like I said the path was closed so this was the best I could do. 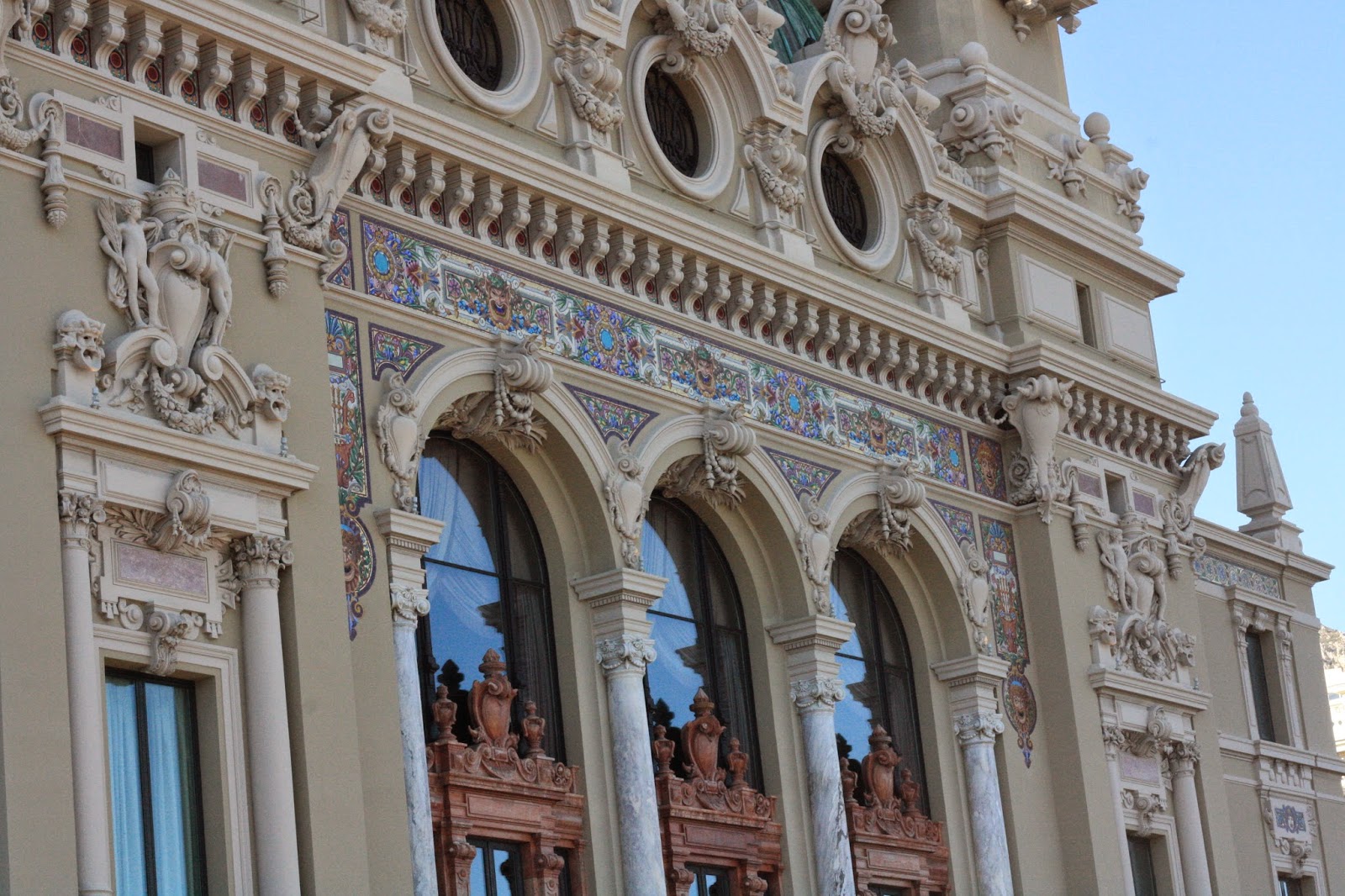 Once we got back on the bus it took forever to get back because there was a huge accident and we were starving so as soon as we got off the bus we pretty much ran to get food and I ended up getting muscles and fries which were delicious. After that we headed home for some nice chill time, drank some wine and just hung out until it was time for bed, I think we stopped at the grocery store to get the wine haha but other than that we just went home.

Now the France posts are not done yet there are still a few more ! I am going to attempt to write another one right now so that I can post it tomorrow. Once again I am so sorry for these posts being so late but it is fun for me to relive them now and it’s never too late to share fun travel stories so I hope you are enjoying reliving my trip with me and make sure to check back tomorrow for the next one !