After our London adventure and getting onto the second plane and heading to Nice we arrived at our apartment around 4pm, but we were exhausted and just walked around a bit, grabbed some food and came back and went to bed. The following day though we climbed up Castle hill which you will see down below, and me and jay also went and climbed up to Fortes De Mont Albert so needless to say we spent literally like 10 hours climbing up and down mountains ( my feet were KILLING ) after that first day.

Here is what our apartment looked like it is called La Cote Du Paradis. It was so beautiful and I would honestly stay there again and again because it was perfect and had everything that we needed, also it is right in the center of everything and you can walk pretty much anywhere you would need to go in Nice. If you are thinking about traveling to Nice or even Paris (as they have apartments there as well) then I suggest going through the company we went through Adrian Leeds, and incase you would like to check out more photos here is the link to this apartment ! 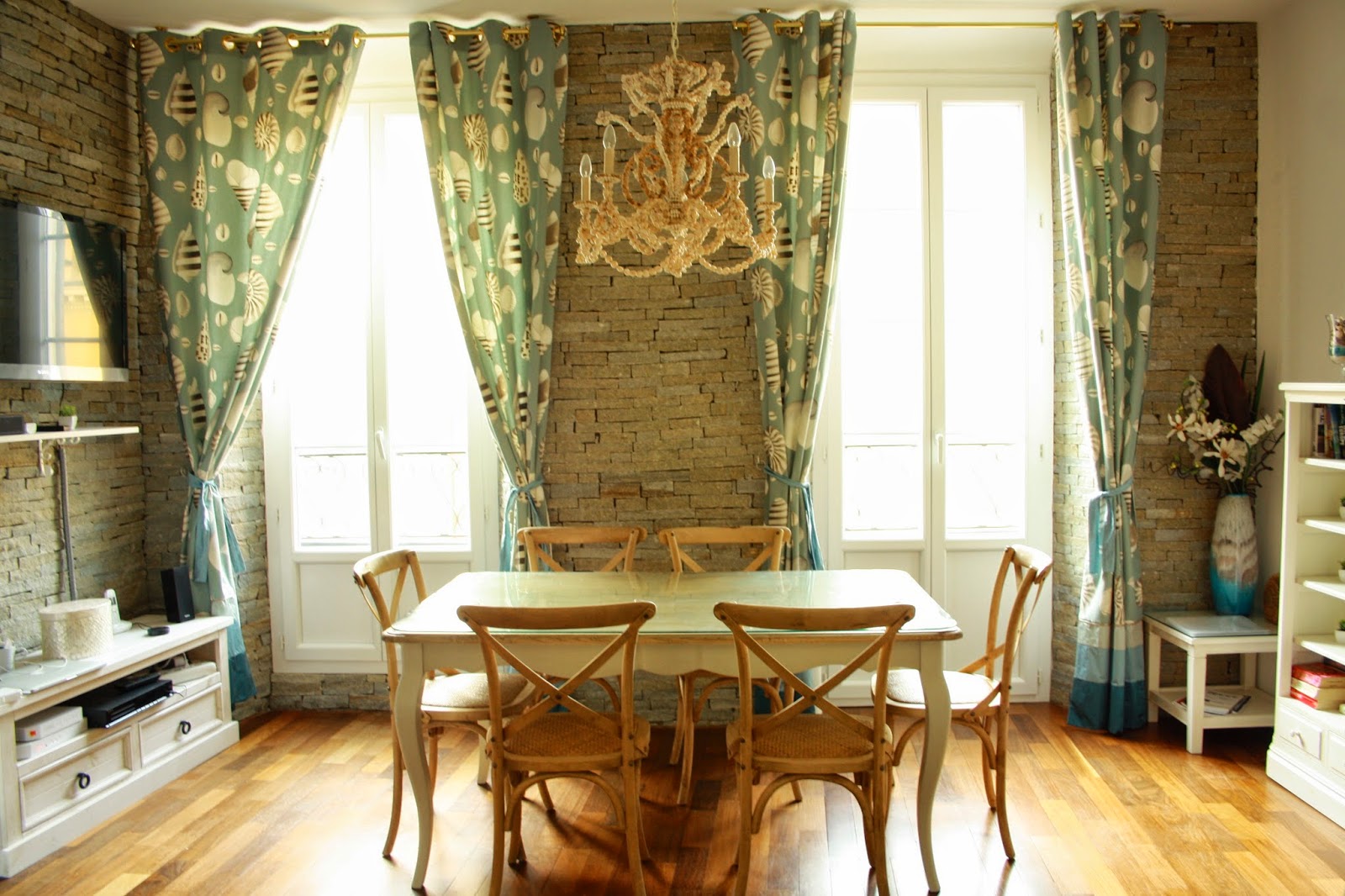 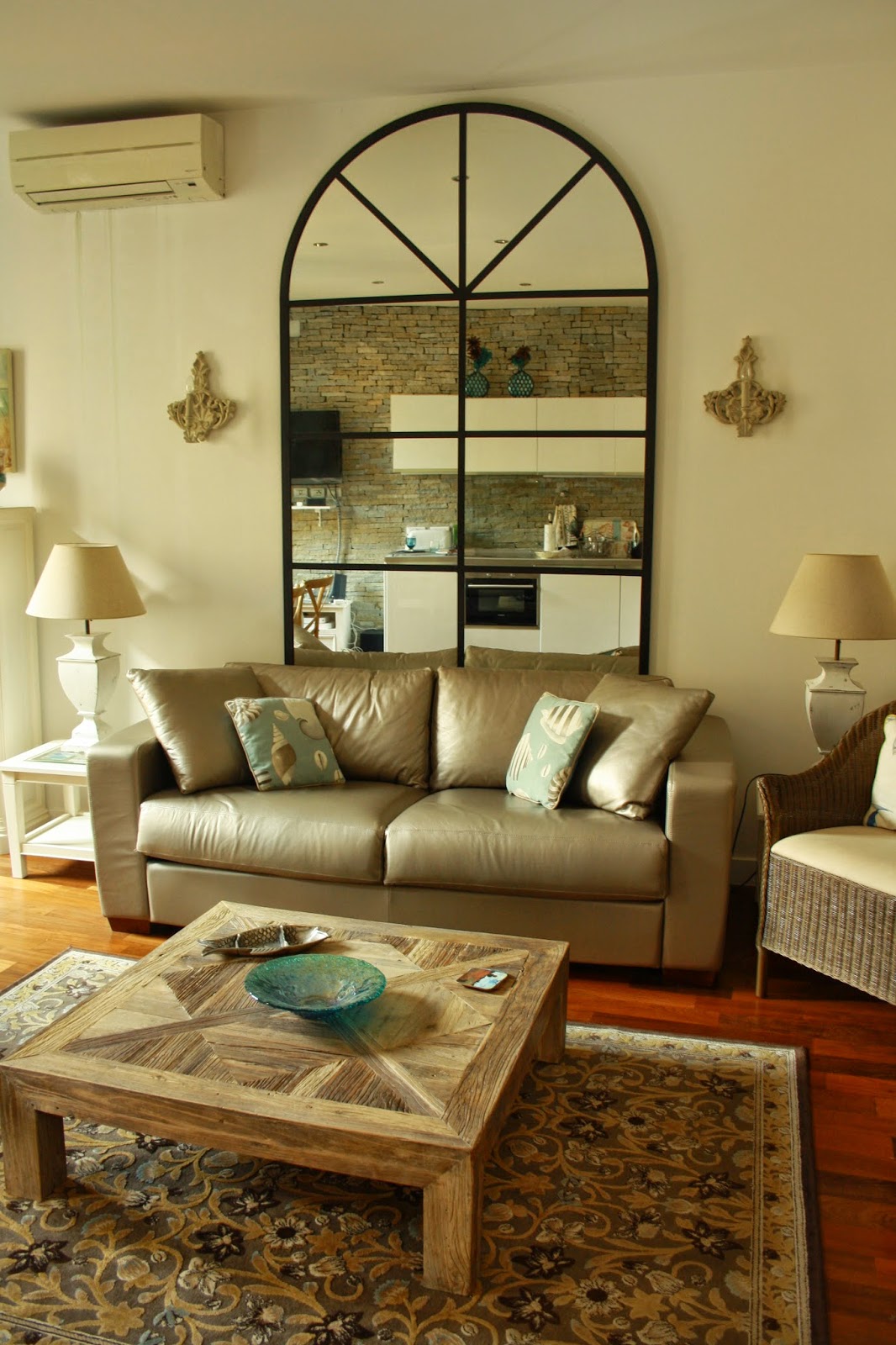 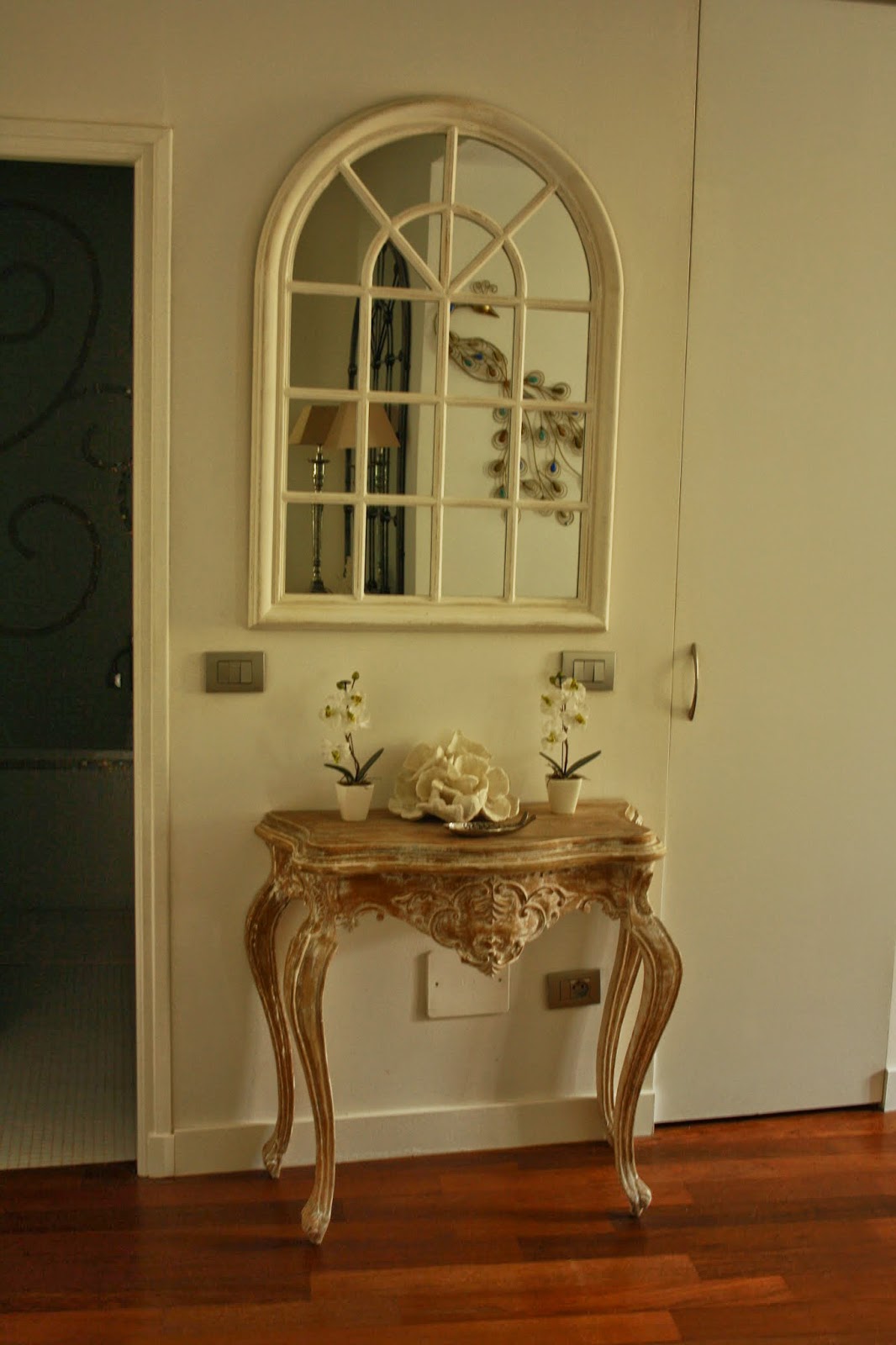 Like I said the first thing we did on the first whole day we were in Nice was climb up Castle Hill as it is the most popular lookout spot in Nice. It was so beautiful and I wish that I had climbed up again on the last day but we ran out of time. My camera was being so stupid this day and for some reason my memory card wasn’t working so I could only take literally like 10 photos and that makes me really mad inside because I’m sure I could have gotten some more really cool shots but whatever. Look at that view like honestly prettiest thing my eyes have ever looked at before. 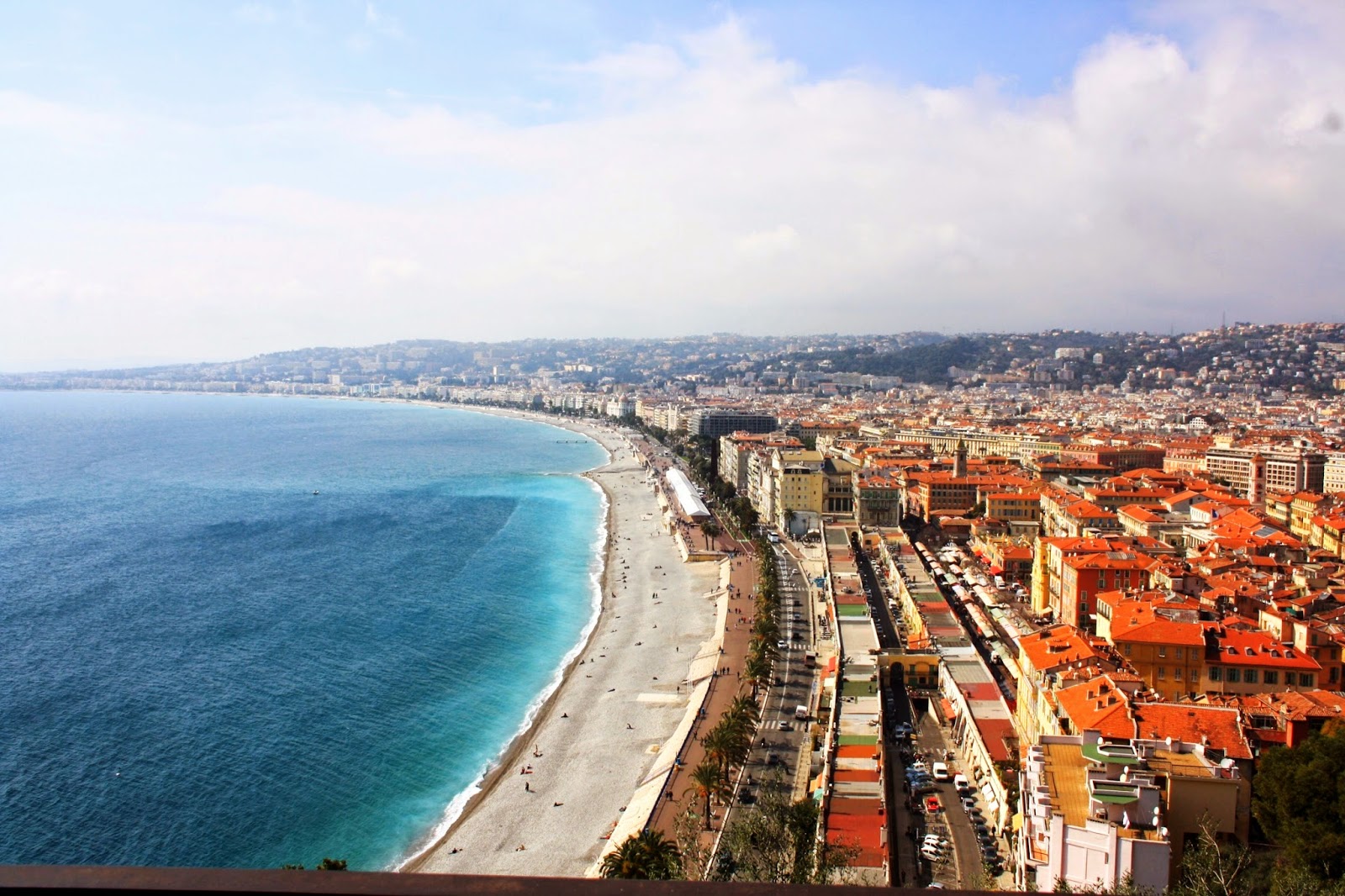 This is the view from the other side of Castle Hill towards the Port. 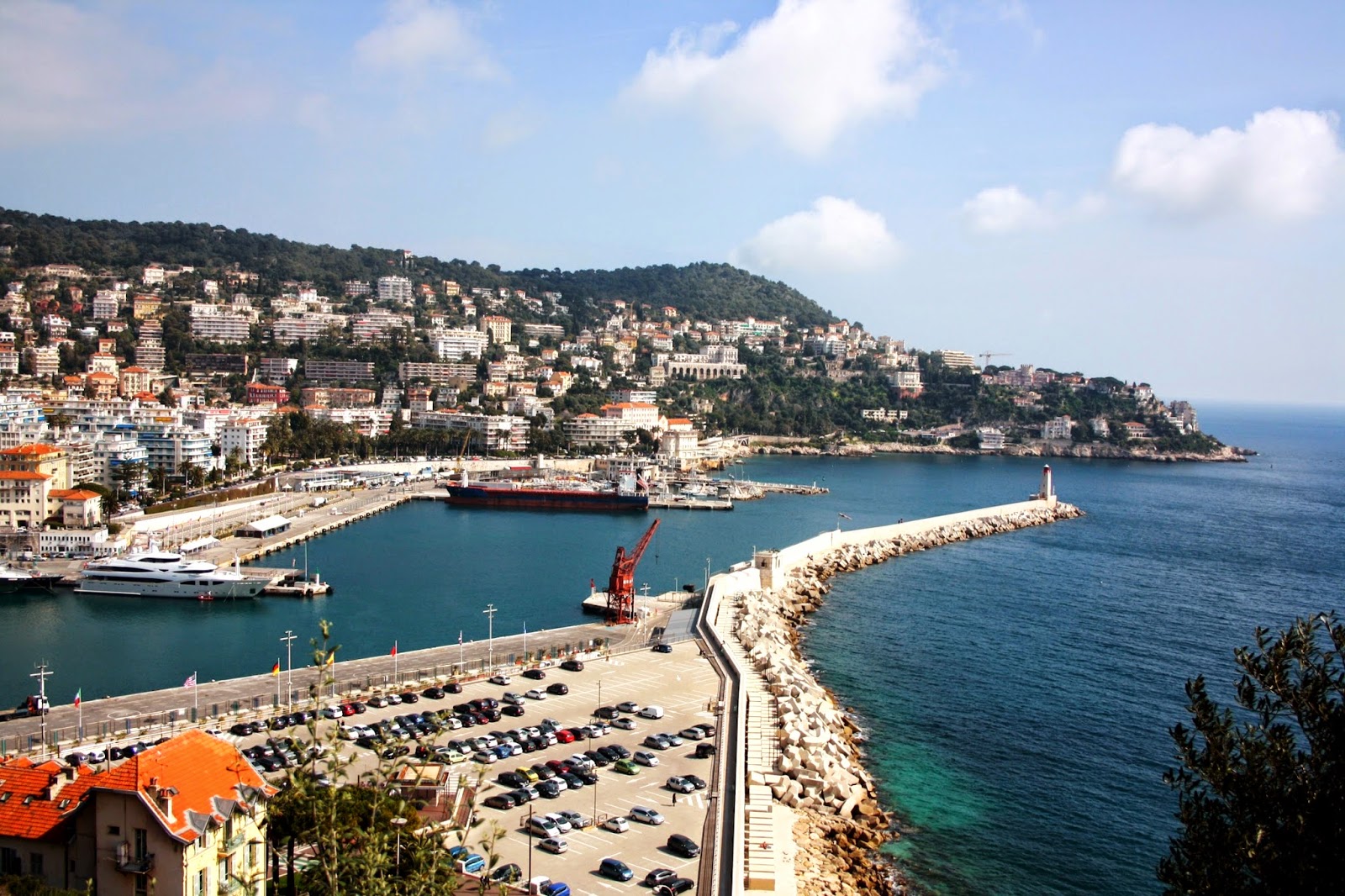 The pastel buildings are really what makes Nice so special, it’s the definition of paradise essentially. I think that Jay and I are honestly going to move there for like 6 months because it is that amazing. Most perfect place on earth I miss is so much already. 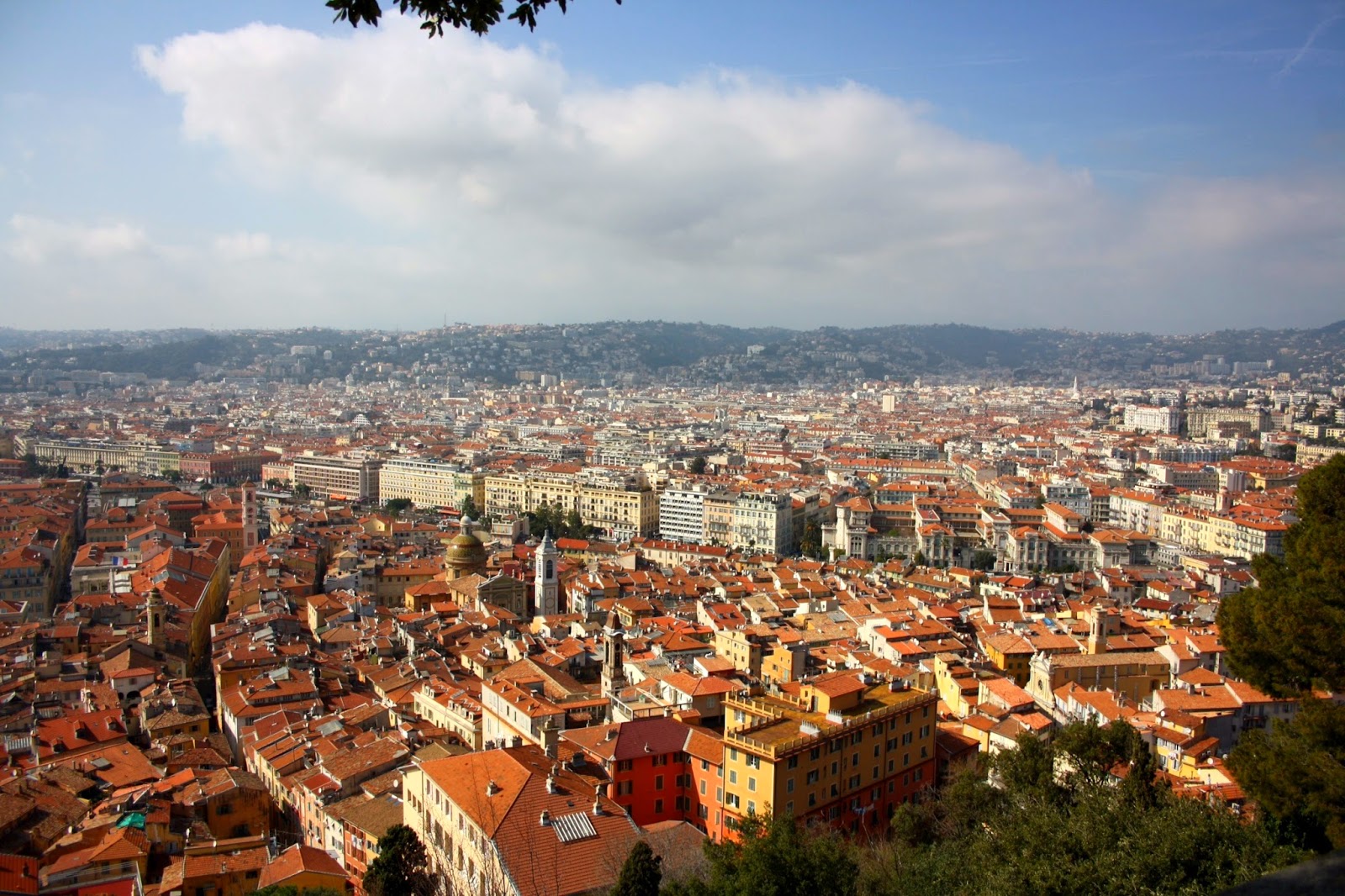 Also on top of Castle Hill there is this beautiful waterfall which was spraying us like crazy but it was so nice and refreshing. It reminds me of Mayan Ruins or something it is so majestic looking and wonderful. I’m pretty sure it is man made though because there was no water above that it was flowing from but it is still beautiful and the rock face itself was there originally. 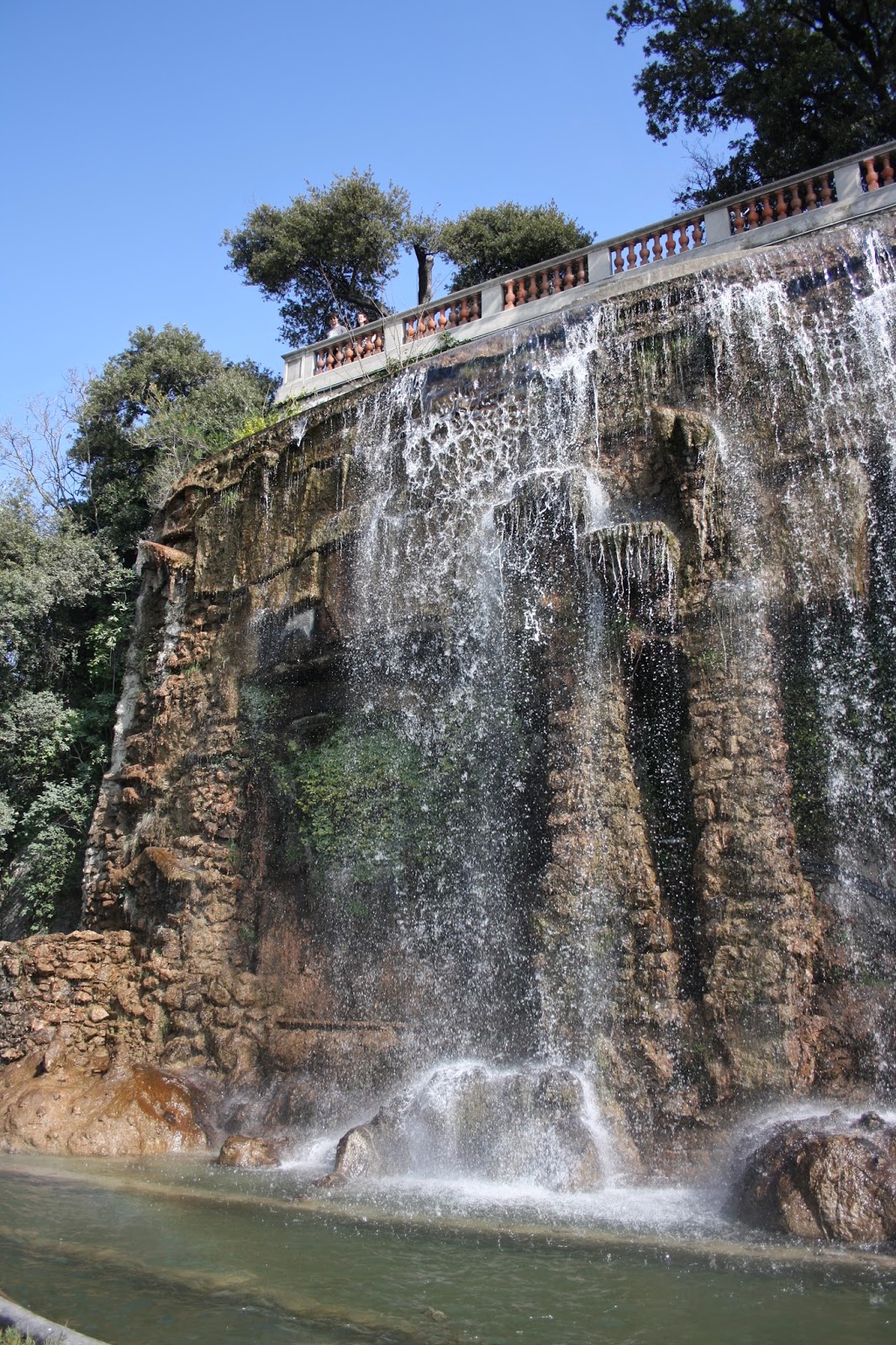 During that same day right after that last photo of the waterfall Jay and I headed back down to our apartment because my shoes were killing me and I wanted to get flip flops before we did anymore walking around. While we were up on Castle Hill Jay also spotted Fortes De Mont Alban and decided that he was going to hike on over and climb it (getting directions from a French man that didn’t speak any English non the less lol). As my feet were killing I really did not want to climb up another much larger hill/ mountain and was going to stay and chill out in the apartment until my mom and Marina came back but Jay convinced me to go with him after a little bit of coaxing… let’s just say it took 3 hours to climb up and I thought I was literally going to die before we made it up.

Now that I look back on it, it was worth all of the struggles to get up there because honestly it was an amazing view. We left to go up the hill at around 2:30, got to the base of the hill by 3 and then finally made it up at 6. It was getting dark when we arrived at the top so it’s not as vibrant and beautiful as it would have been mid day but the view was absolutely stunning, we were so high up and the air was so fresh. There were other people there as well, probably about 6, but they all drove up the giant hill, we were the only ones on the roads leading up to it (which I think is because not many tourists know about it, or because it was getting late lol). But I honestly think we must have walked up a solid 1000 stairs to get there, it was crazy but again, completely worth it. 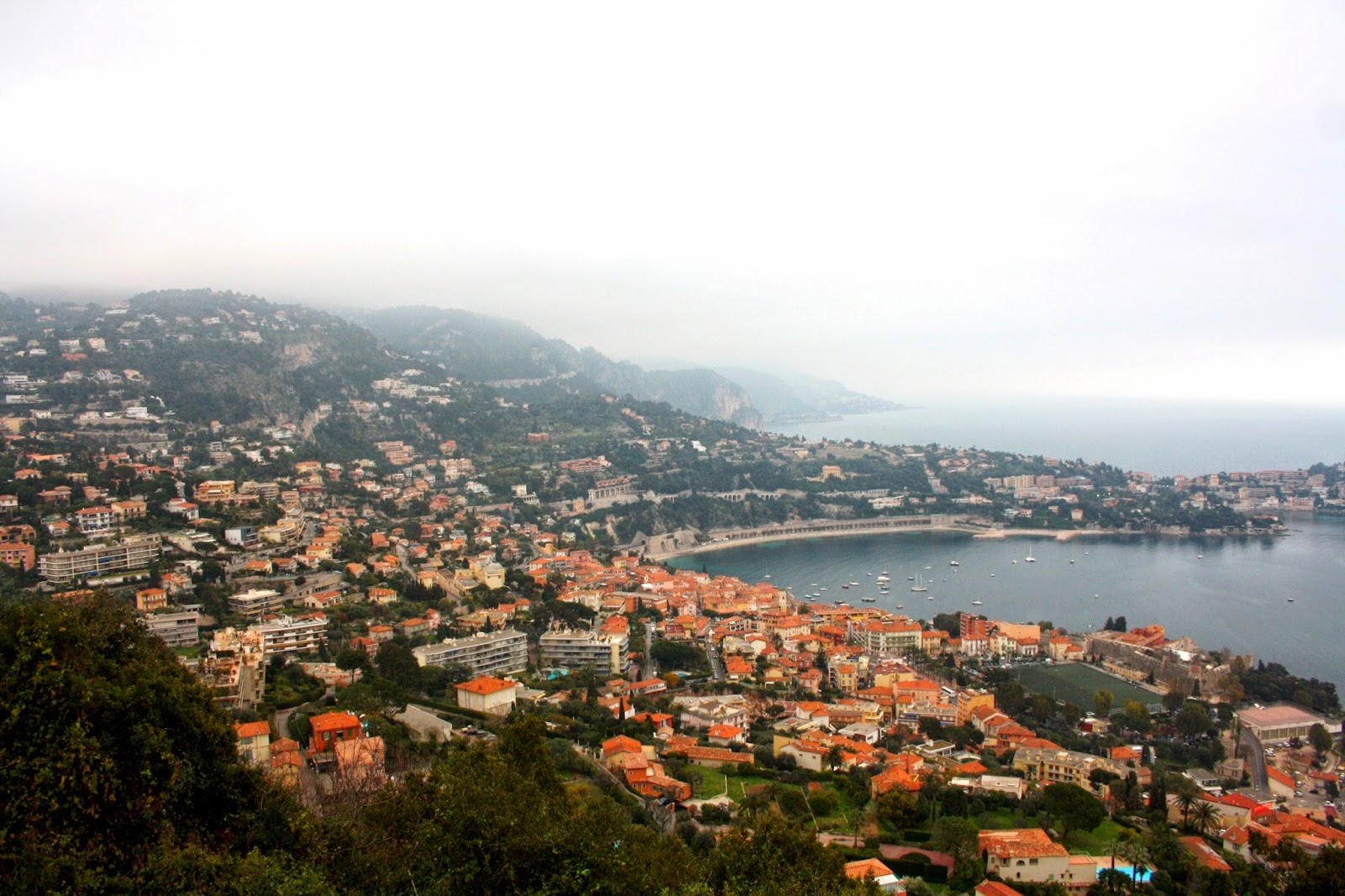 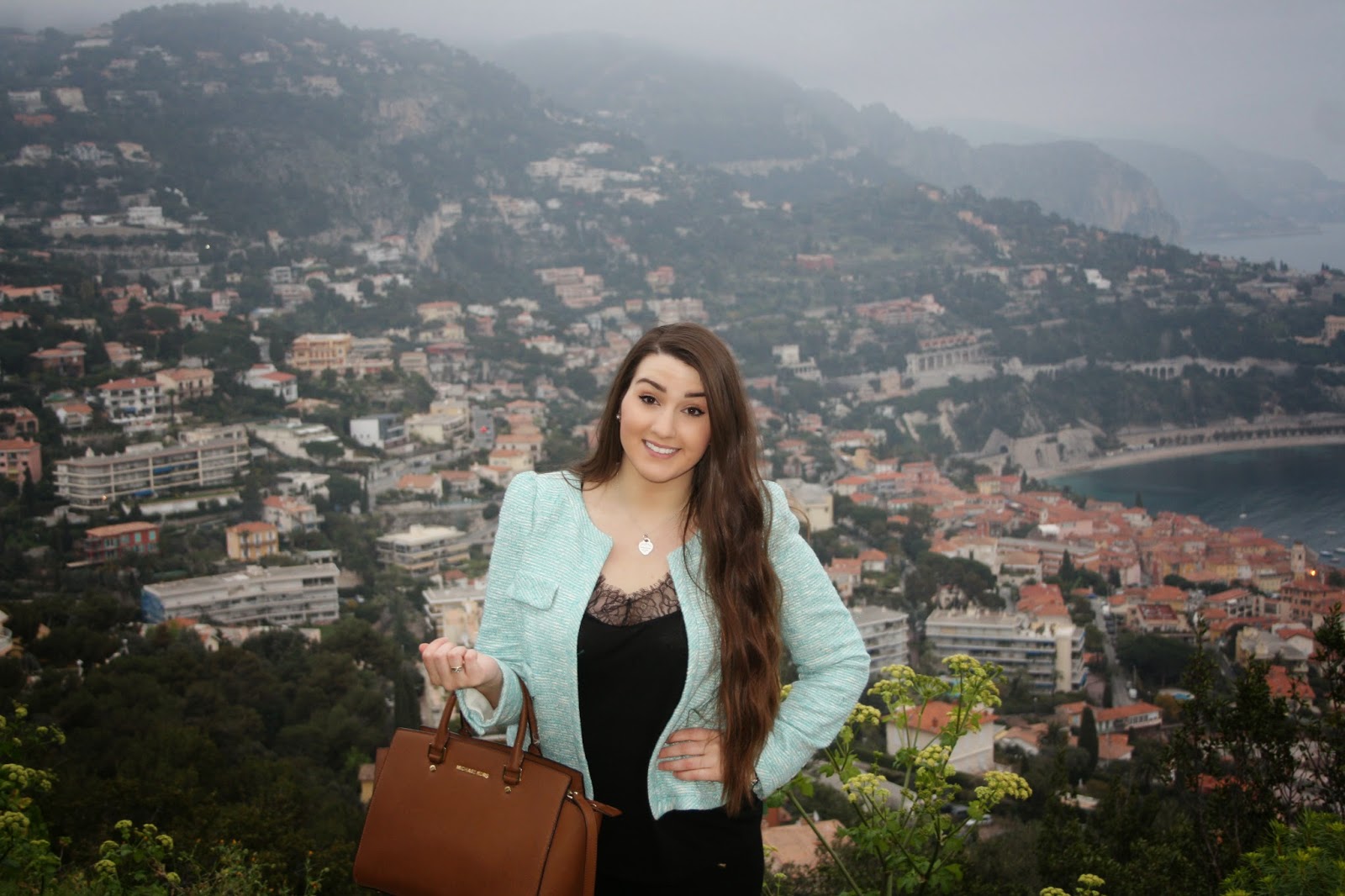 You can see in this photo just how much higher up we were than at Castle Hill just by the landscape you see. We only spent about an hour up there because we had to go back down the hill (another 3 hours) and it was almost dark when we left, but that was enough time  to walk around the Fort and admire it and the view. I wish we knew it would have taken so long to get up there and that buses ran up there as well, but I’m still really happy that we were there for the time we were. If you, whoever you are reading this ever go to Nice climb this hill (or take a bus) because it really is amazing. 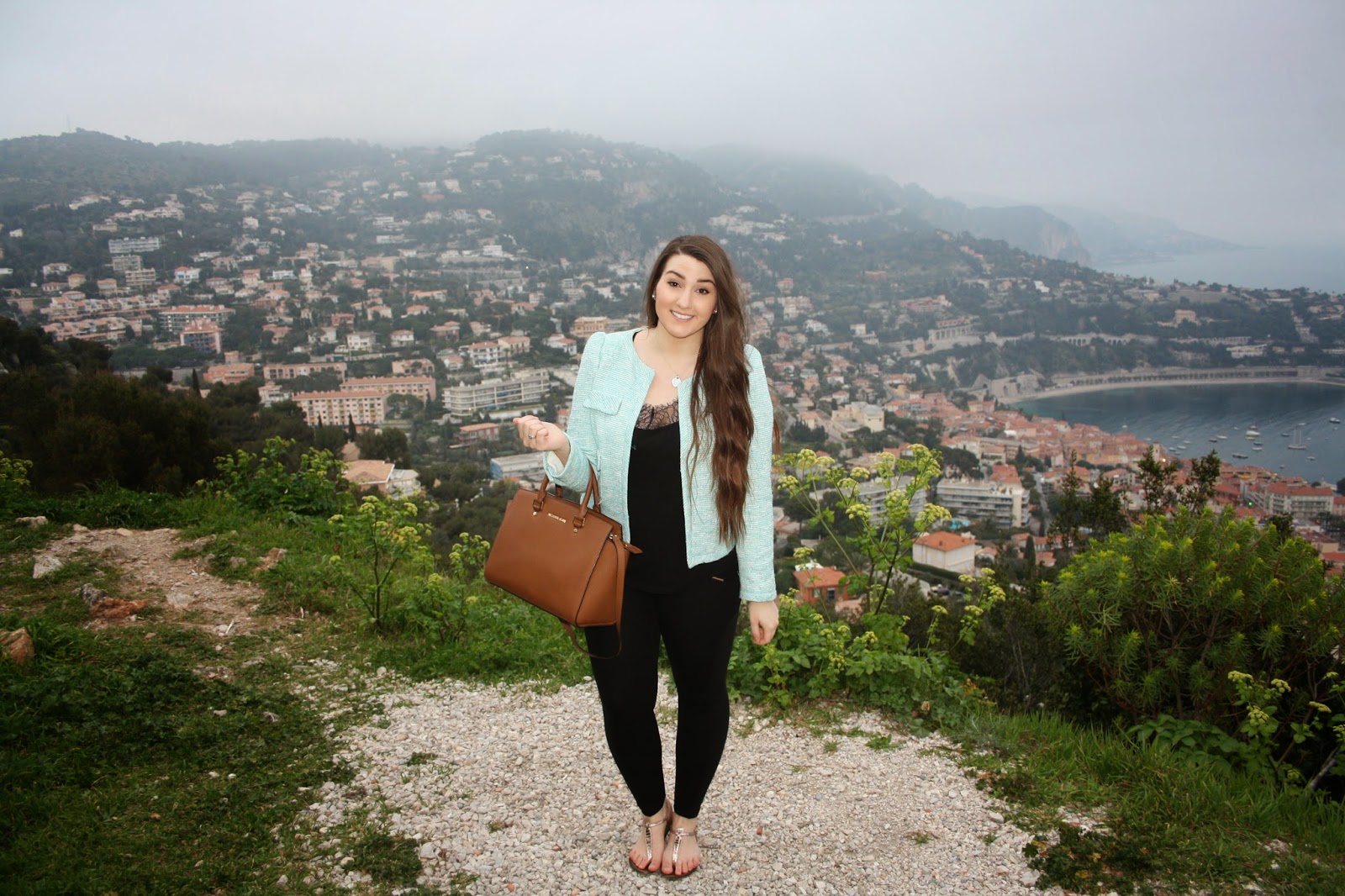 Here is a side view of what the Fort actually looks like, you can’t get into it because it is old and it is not really touristy so there’s no access but we did go up onto that drawbridge (the one up the stairs there) that is where the photo of me 2 up is taken) it was terrifying and did not feel very safe at all, some of the wood was even wobbly. It looks like a real castle though and there is even arrow holes and everything, it was quite amazing to look at and all of the stone work was so rustic; it felt like we went back in time for the time we were up there. 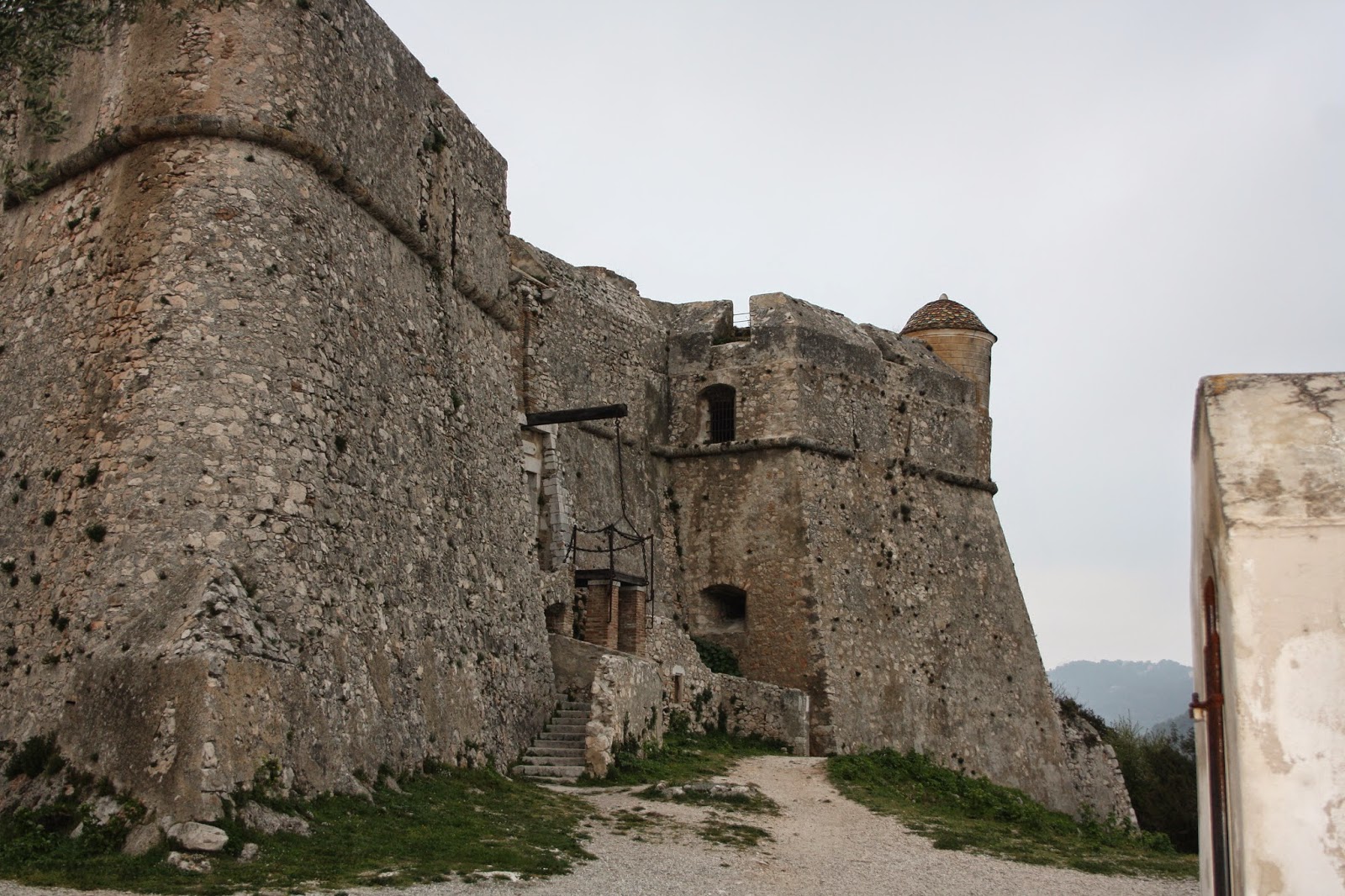 This is a view of the entire Fort, as I said it is pretty much a Castle and has not been touched by time. The grass even looks original and other worldly. I hope that one day they make it so that tourists can go inside because it would be amazing to see the original architecture and stonework inside and explore another time period. 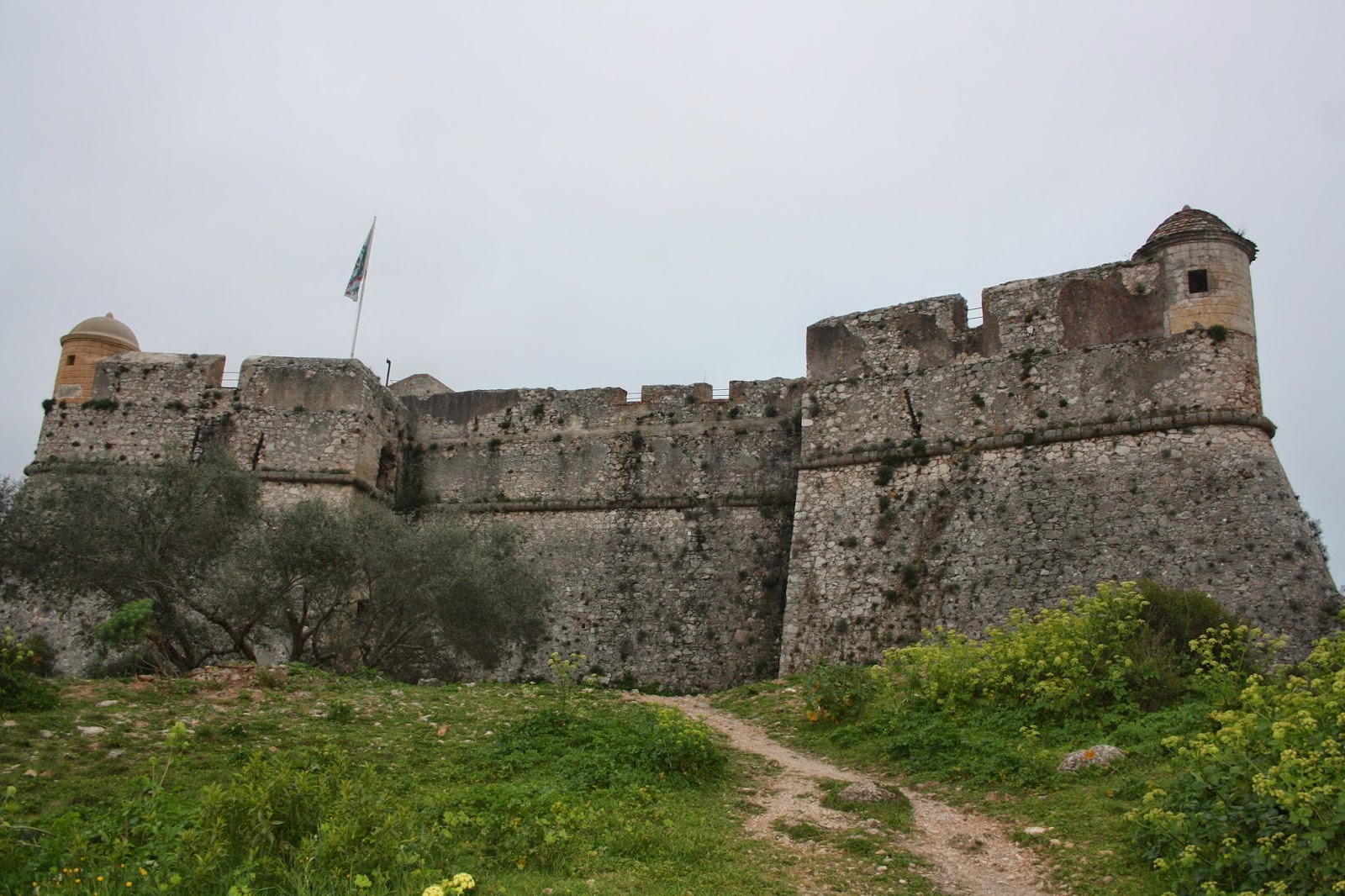 Writing this post has made me miss France more than anything and makes me that much more determined to get there again as soon as possible. It is crazy how much one trip can change your entire life. It has made me want to travel and see every inch of the world because the world is so much bigger than you realize. We get stuck in this rut, this comfort bubble and once you break free of that … well it seems redundant to be doing nothing and wasting time on things and places you do not want to do/ be. I have become a travel addict in the matter of a week lol and will be back to visit/ live in France as soon as possible.

I will be doing three more travel posts, one more on nice and then Monaco and Cannes, I really need to get rolling because I went away a month ago and am still only doing the first Nice post lol I suck, I still have a haul to do as well and lots of outfit posts so I will get on most of that this week hopefully !

P.s. sorry this took so long to post I have had it half written and the photos up for like 2 weeks now, I was just super busy and exhausted from working so much !