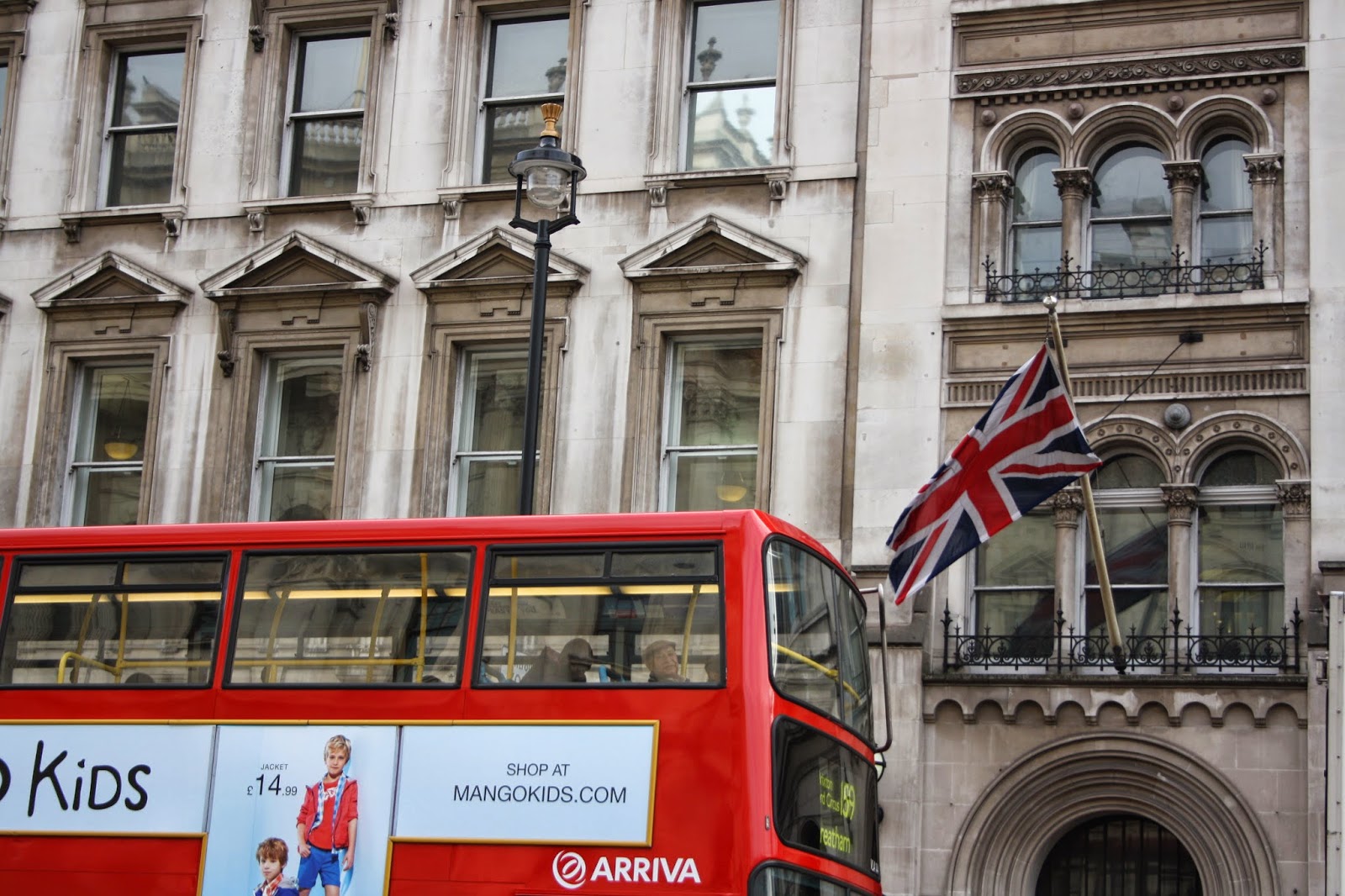 I am back from France ! Well I have technically been back for like a week but you know, I’m just now getting back into the swing of things ( I was SUPER lazy last week, I was just exhausted and didn’t feel like doing anything but sitting and sleeping lol). But now I can post about my amazing trip and that makes me excited because I get to pretty much re-live it.

So, on our way over to and back from France we had stop overs in London, England which made me super excited because A. I have always wanted to go to London and B. I was secretly ( or not so secretly ) searching for Harry Styles… but I did not find him which makes me really sad but that’s okay because I was still in his homeland and that is enough. On the way there we had a six hour stop over so of course we decided that we needed to run around London and see a few things as fast as we could before having to get back on the plane. On the way back we only had a 2 hour stop over unfortunately so we couldn’t go and enjoy more of that beautiful city but in the couple hours that we did have to see it (about 3 hours, 1 and a half of which were spent in transit ) I feel in love with it. 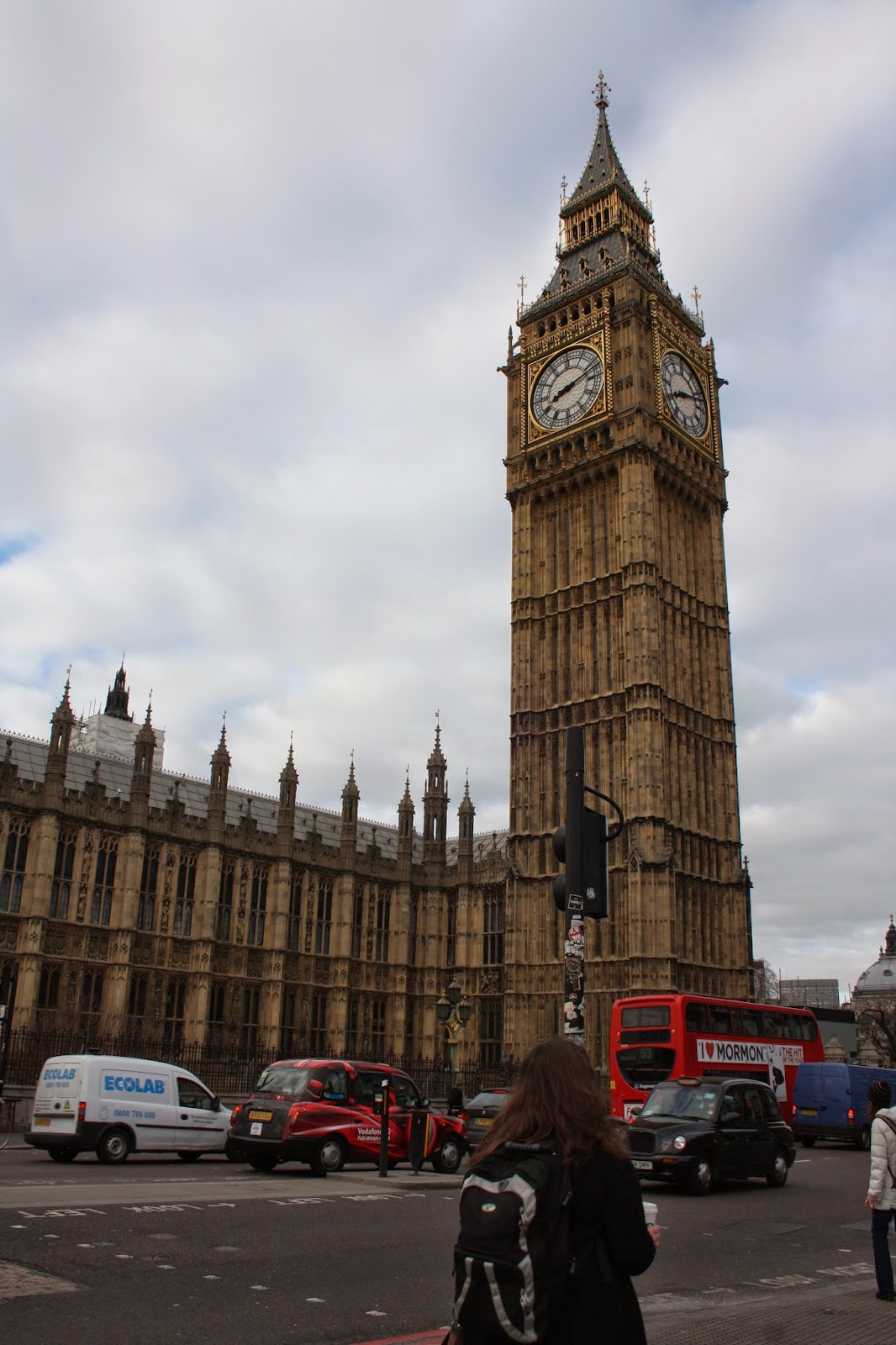 So, we had to take the Heathrow Express and also the regular tube to get over to all of the attractions we went to see and let me just say that alone was super fun, even just saying that I was going on the tube because it is so British and I love it. BUT the fact that we got to walk around and see all of the cool things London has to offer is even better. We took the tube over to see Big Ben first and of course it was amazingly beautiful (as you can see). Its still surreal to me that we actual saw it in person ( I was exhausted because I didn’t sleep at all on the plane so I was in a bit of a daze ). But yes it was even better in person than in photos, they just don’t do it justice.

Fun Fact ! The London Eye is literally right across from Big Ben, so where I stood taking that exact photo of Big Ben if you spin around and look behind you, that is where I took the photo of the London Eye. I feel like a lot of people probably know that but I did not and still find it weird how close they are to each other lol. We didn’t end up going into the London Eye because we didn’t have enough time but next time I am in London you can bet your bottom dollar that I will go up. 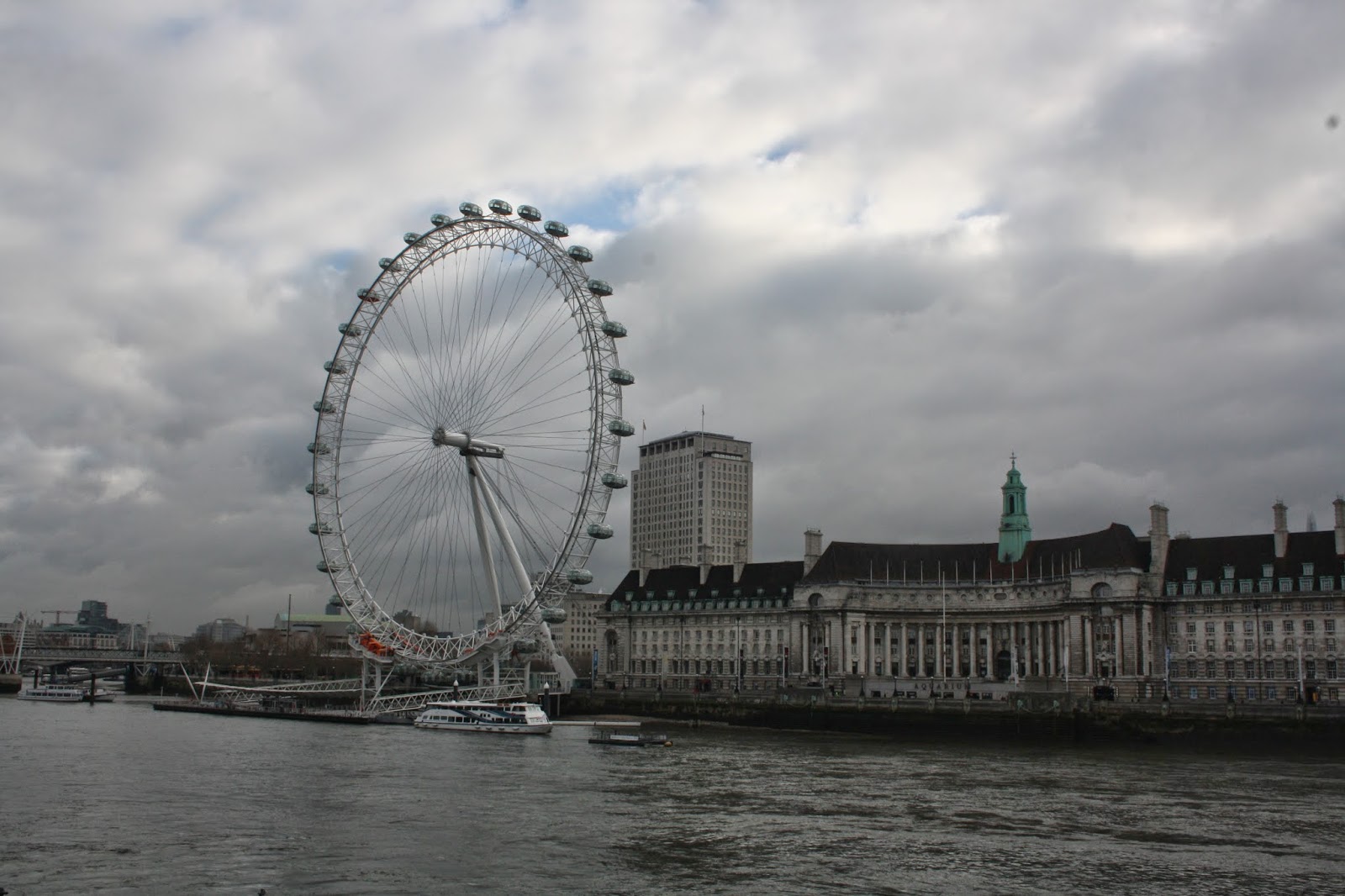 Of course I had to take a photo with a telephone booth ! They are so cool lol, still gets me that they exist. Please excuse my disgusting hair and disheveled appearance in these photos lol I had just gotten off a 8 hour plane ride, I am allowed to look like poop.  But yes while we’re at it this is what I wore on the plane. A black tank top, black blazer, grey circle scarf (the softest scarf I own, which I made sure to bring specifically for that reason), my lulu’s and some beige booties, which wasn’t the best idea in the world but whatever. I also brought my comfiest pullover in my carry on that I put on as soon as I was on the plane.

I am pleased that Harry did not see me like this now that I think of it, that would have sucked. 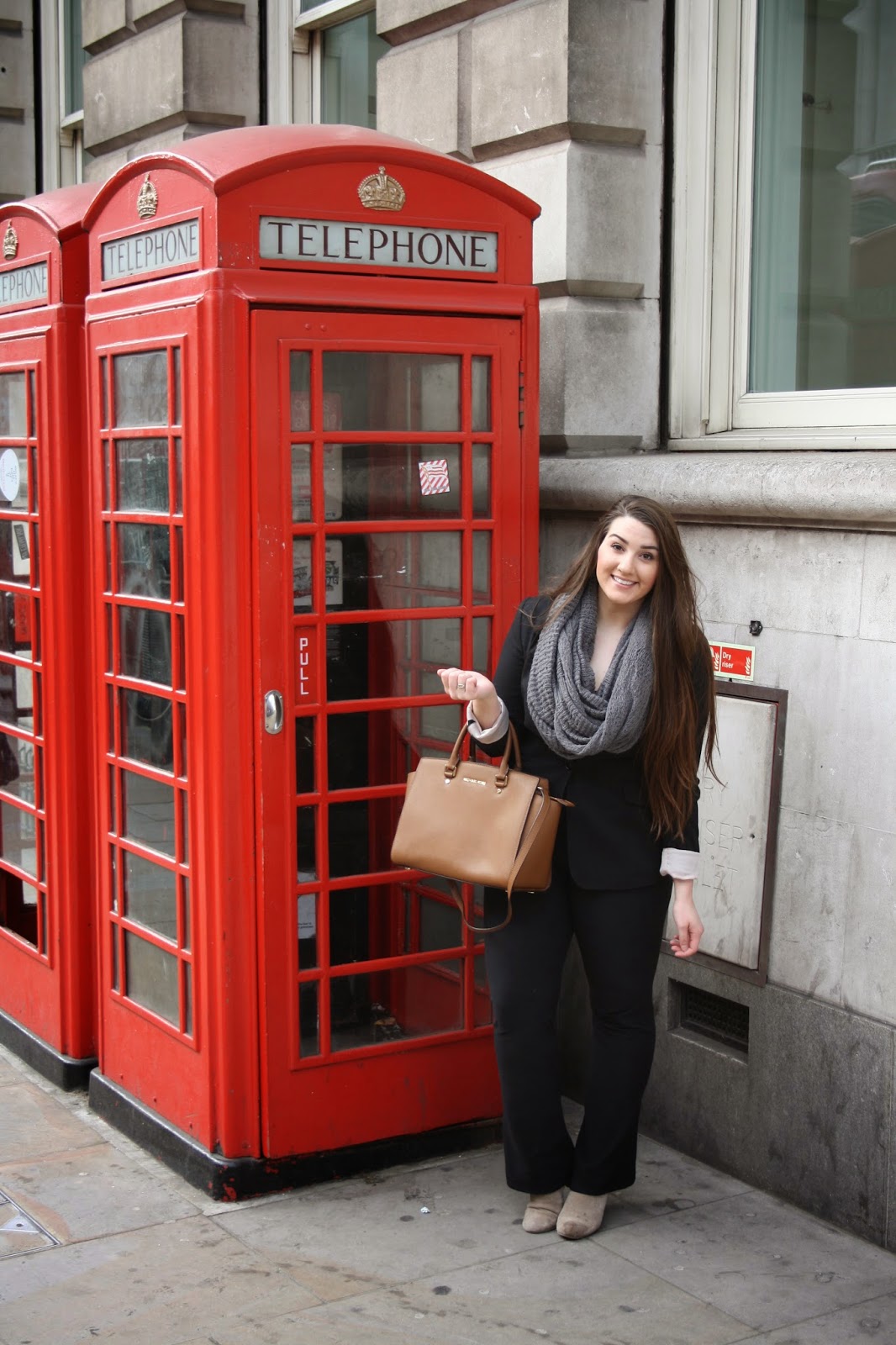 All of the architecture was so beautiful though, that is what I loved
most about the entirety of our travels is that all of the architecture
in Europe is old and majestic and so intricate and we don’t have any of
that in Canada. It makes me really sad because they put so much effort
into everything that they built and you can really appreciate their work
looking at how beautiful it is, but here all of the buildings look like
concrete nothingness and they don’t even get a second glance because
they’re so basic and ugly. Old stunning architecture inspires me in a
way that nothing else does lol.. moral of the story. #Appreciate.

Like honestly look at that statue… you can see all of the horses muscles to a T, just think about the work that went into that for a second and go reevaluate your life. 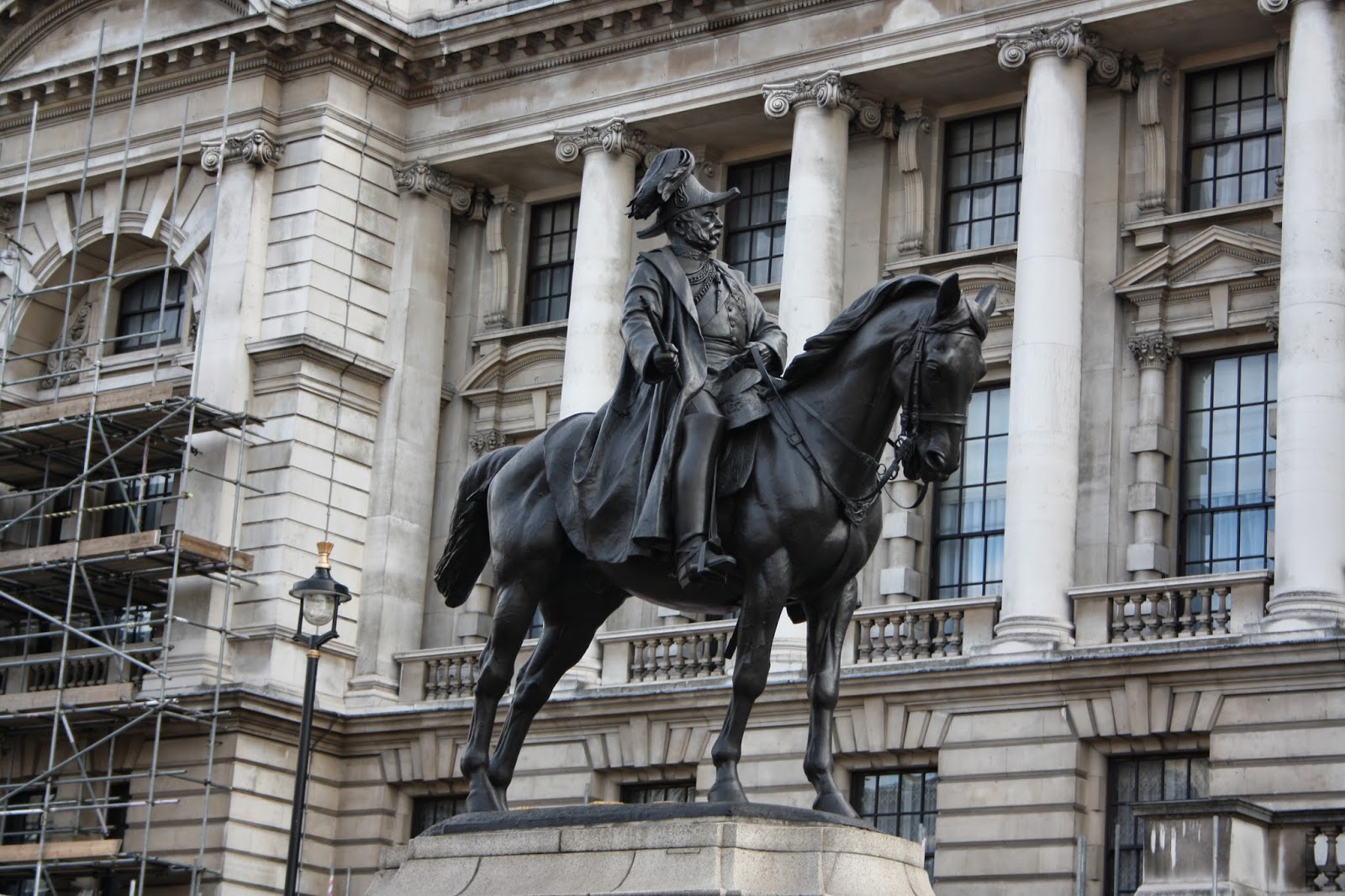 After seeing Benny Boy & the London Eye we decided that we were going to practically RUN and see Buckingham Palace because I think we only had about 45  to get back to the tube so we had to hustle. It was so worth it though, even just to see the garden leading up to it and breathing the freshest air I have ever taken a breath of. ever. Look at these gates though.. SO PRETTY. I wish I knew what that said up there but I don’t even know what language that is, maybe Latin ? I actually have no clue. If anyone wants to let me know that would be lovely haha. 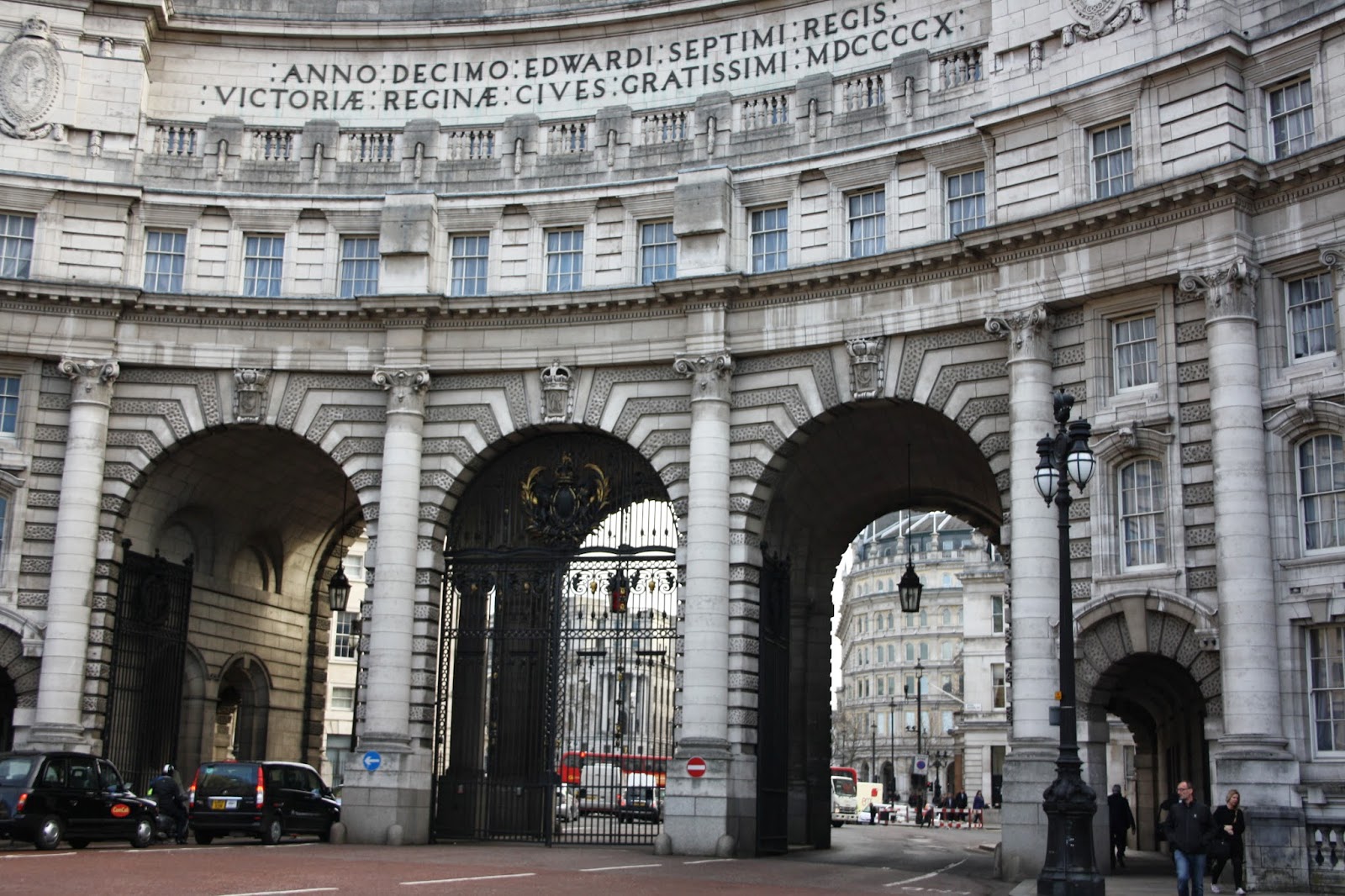 Look at the swannn ! Like prettiest garden / pond / park in the whole world I think. The weather was amazing as well, it is fully spring in London at the moment and that makes me very sad because we still have tons of snow and I am currently here instead of there. 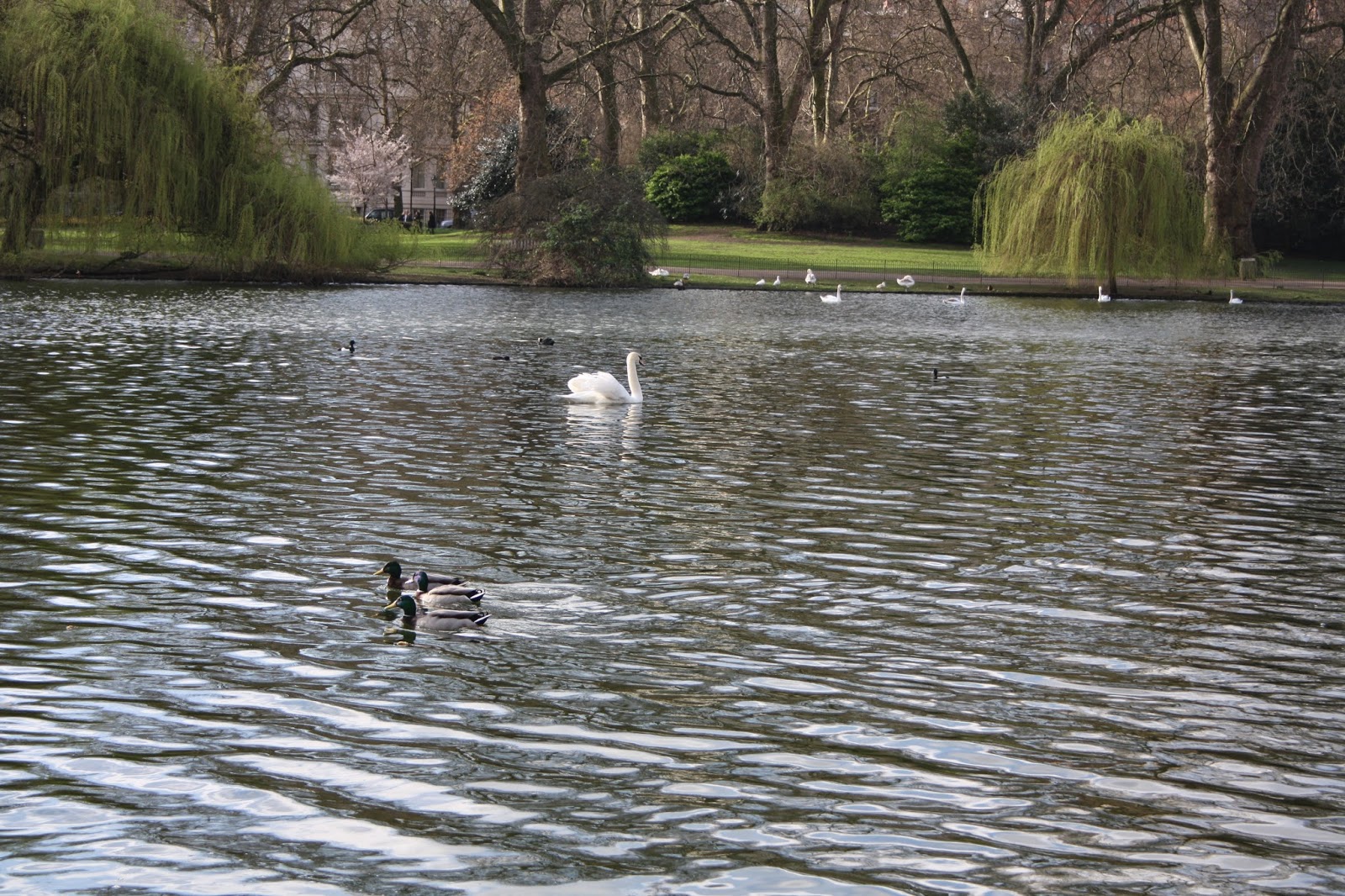 Like seriously, so beautiful. If I lived in London I would most definitely take a nice long walk through this park everyday. Oh, also there were so many birds, probably more birds than I have seen in total this year in that one park, all different species too; one’s that I haven’t even seen before like Mr. Pelican you will see below. 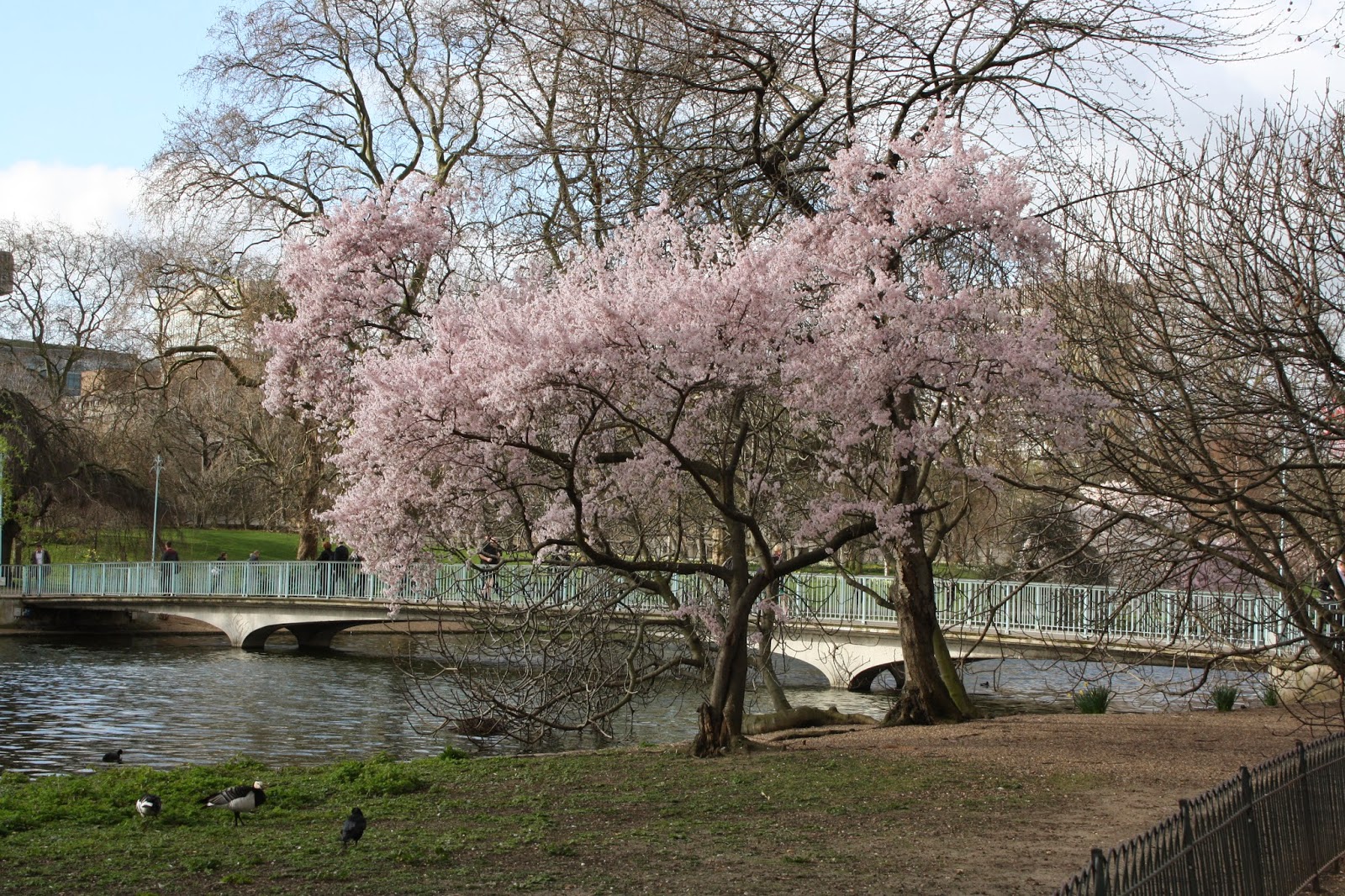 Yay for photos with the prettiest background ever. Imagine if I could take my outfit photos here all the time… It would be too perfect for words. I actually think I need to move to London even more than I already wanted to now; but honestly, even though I looked like crap the background makes me look not so much like crap because it like radiates beauty onto everyone and everything around it. 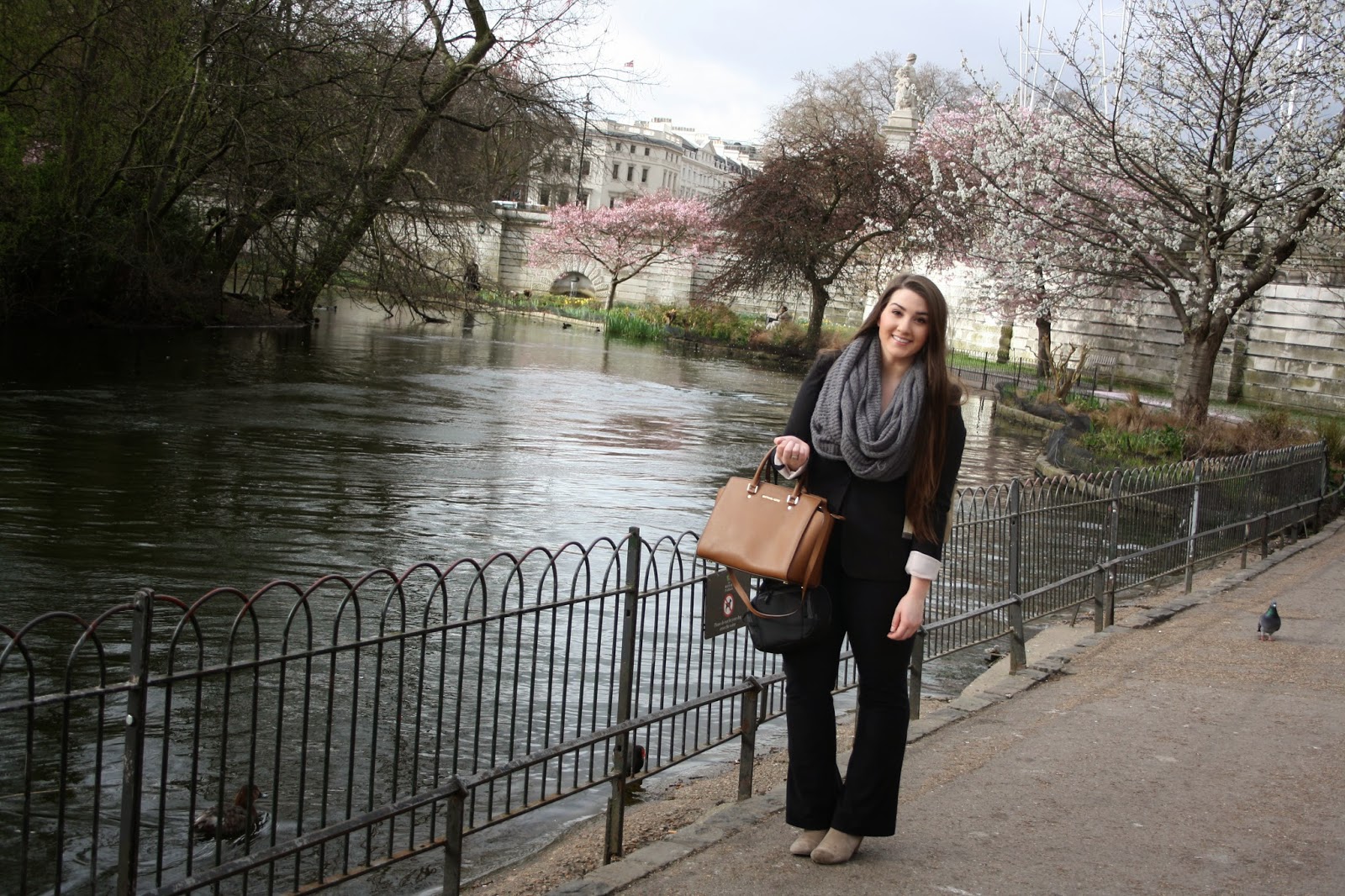 See, Mr. Pelican – how freakin sweet is that. Finding Nemo moment anyone ? 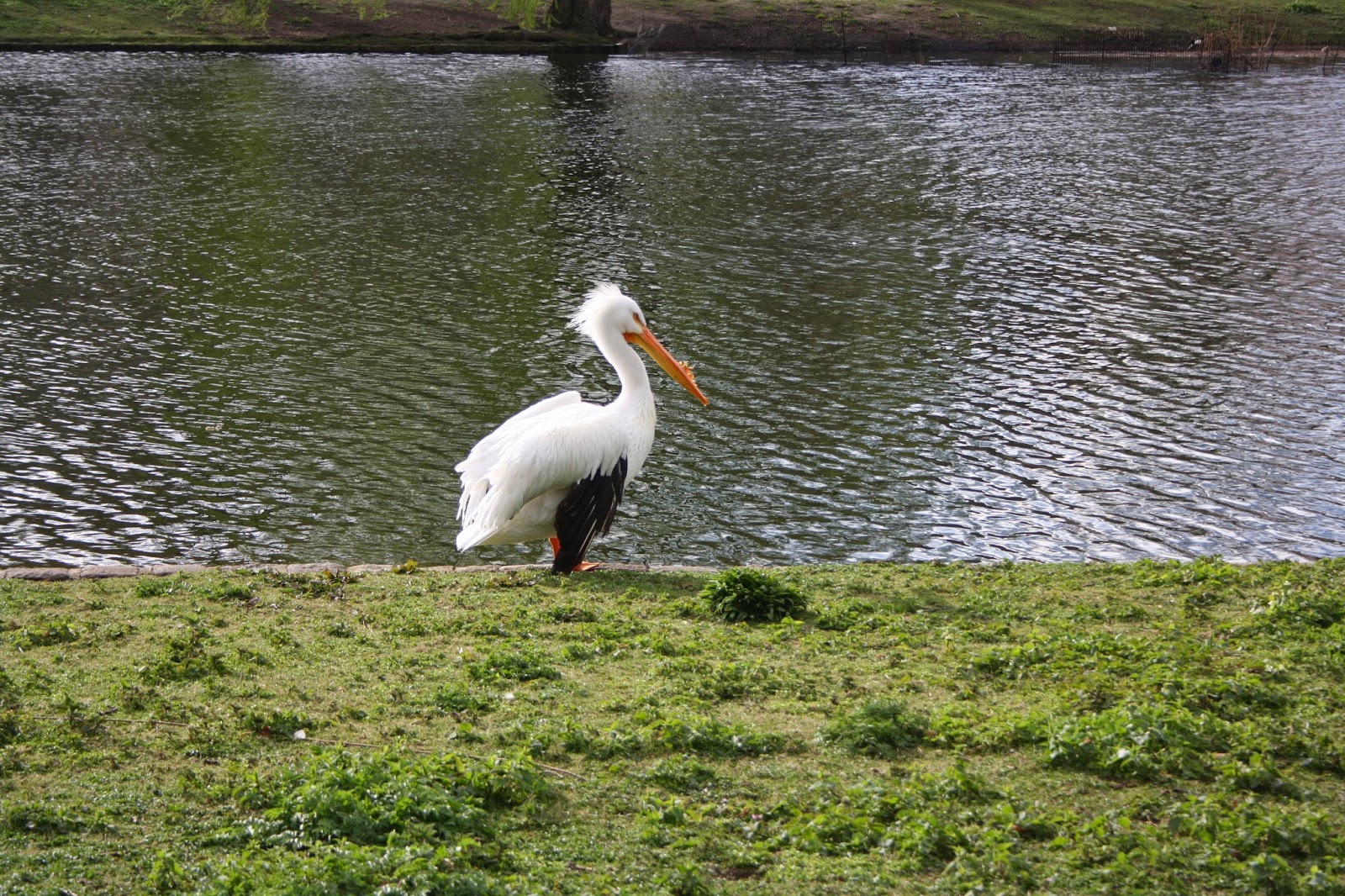 Finally we make it to Buckingham Palace ! These are the gates which really aren’t even in front of it, they’re more diagonal to the building itself ? So I’m not sure what purpose these serve other than looking amaze balls ? They are definitely spectacular though. Also, take a moment to look at how perfect the grass is. 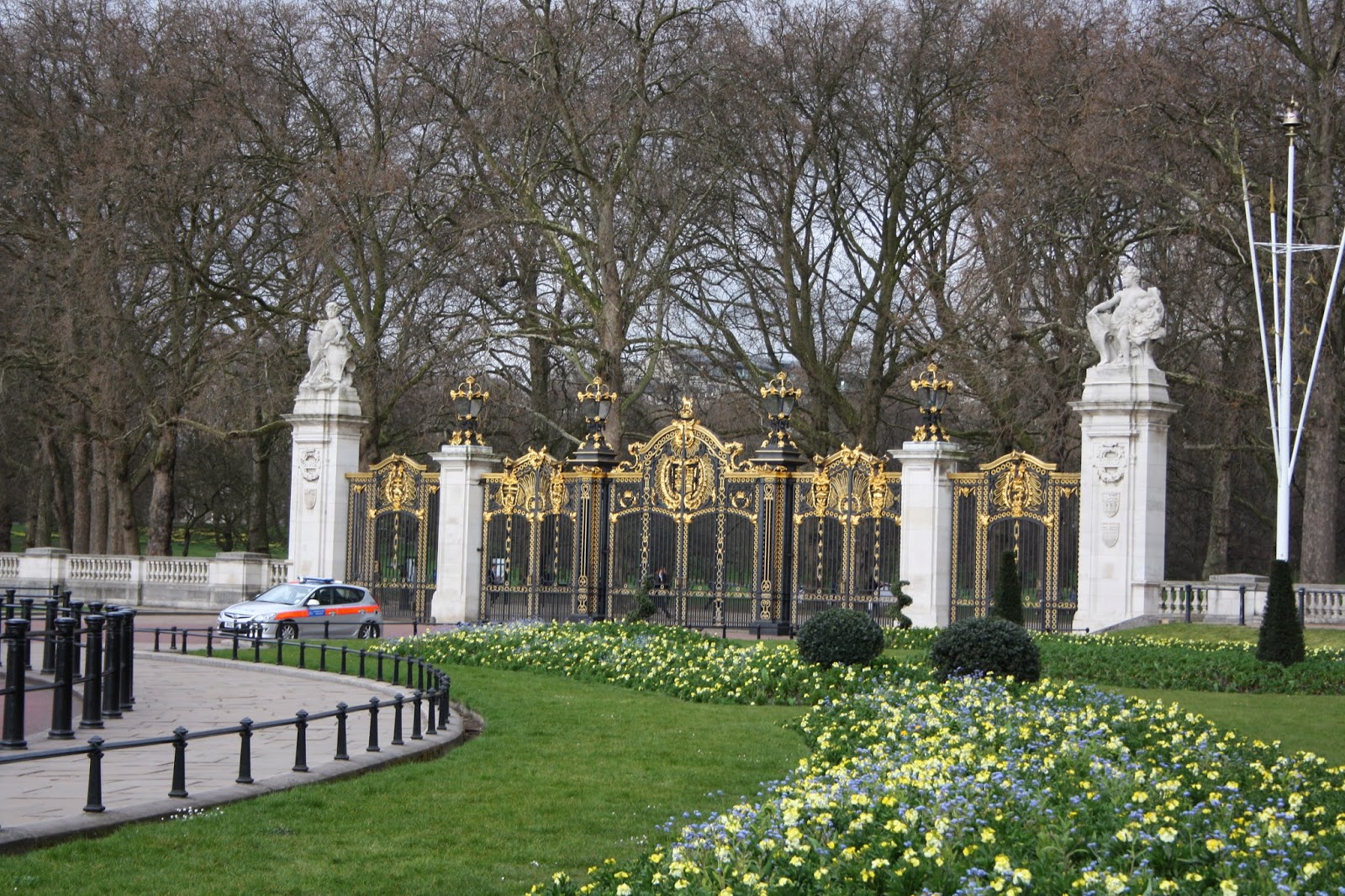 Lastly, here is Jay & I in front of the palace. We did not get to have tea with the queen unfortunately we were crunched for time and had to tell her that we would have to reschedule, she was very understanding. Haha imagine, that is the dream / life goal right there.The Palace was beautiful though, and I didn’t take anymore photos on the way back to the tube because my feet were killing and I actually had to run a few times to catch up to the fastest walkers known to man aka. my Mother, Marina and Jay. If I ever travel with them again I will only bring running shoes so I can just jog everywhere they go… and yes I know your going to read this Mother so ya you guys need to slowww downnn, stop and smell the roses or something because ya’ll are way too fast for my short legs. 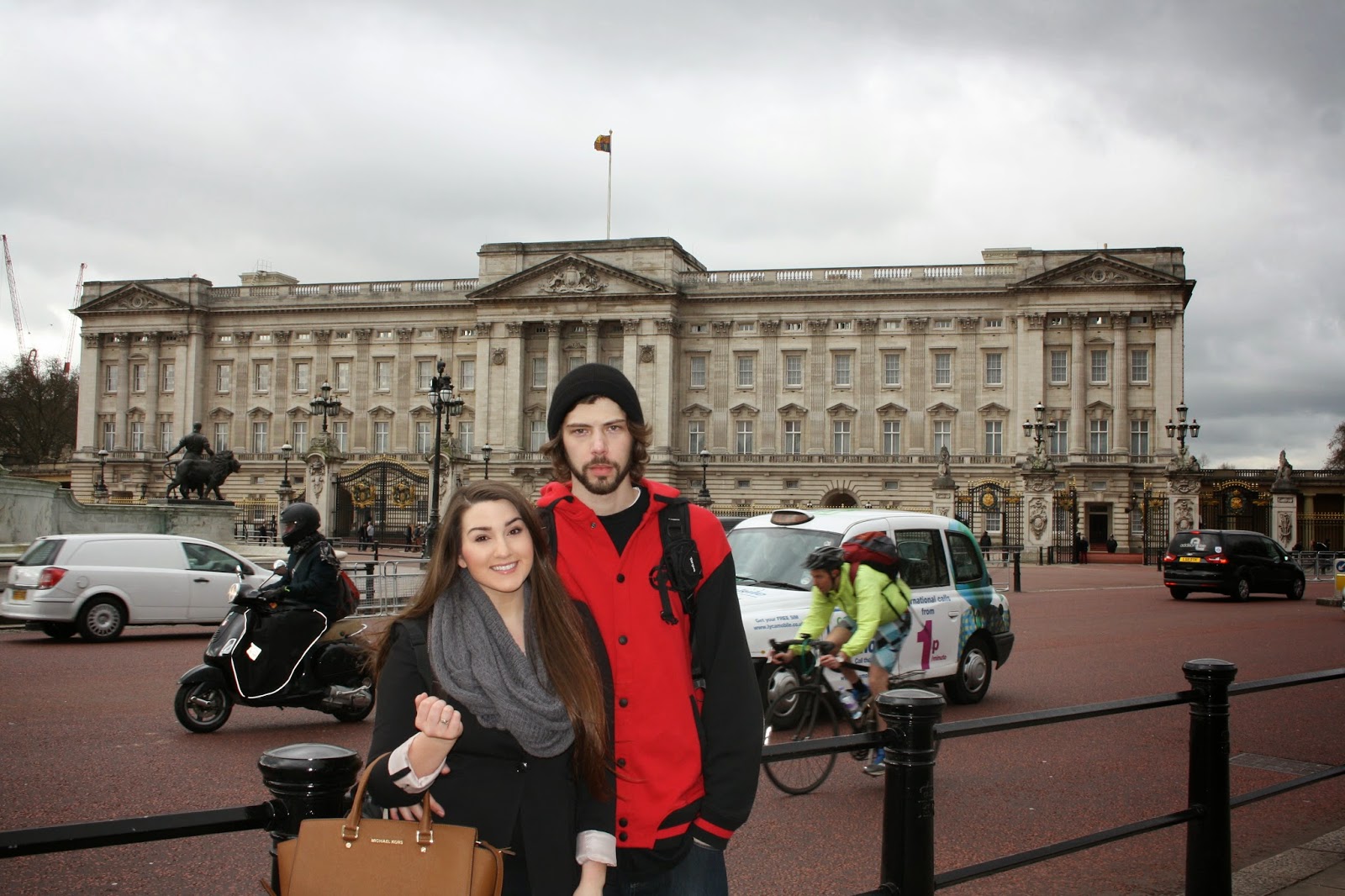 Overall the few hours we had in London is amazing and I am almost positive that London will be my next trip on it’s own because I have fallen in love and need to see more of that wonderful place. Plus, if I breathed in that air for an entire week or two my lungs would be as fresh as a babies, I will call it a lung cleanse if you will.

Now, I was going to do France all in one post but I talk / type way too much so instead I think I am going to make it into Nice, Monaco and then Cannes, and if there is too many photos I might even make two Nice posts because that is technically where we spent the most time and I took the most photos since we were staying there after all.

If you read all of this you are a champ and you should comment so that I know who to give out gold stars to.

Thanks for sticking it out !
Love ya <3