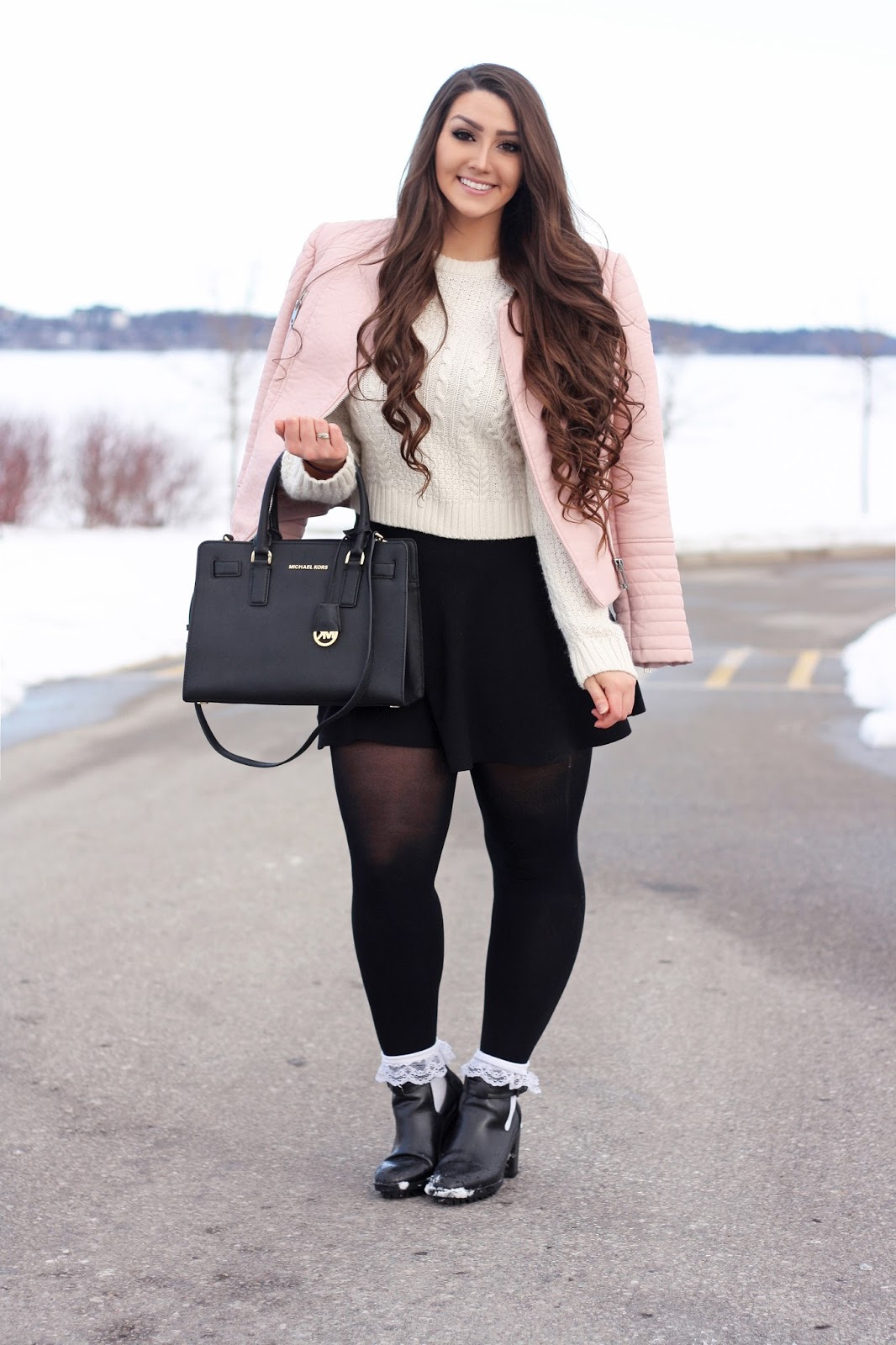 Can you believe it is February already !? I can’t. I feel as though 2016 hasn’t even started yet. This year I didn’t make New Years Resolutions at the beginning of January but at the end, and also didn’t look to start changing things and making things better for my blog until this past week as well. Of course I knew that with the New Year I wanted to change some things and of course post more and general things like that but I didn’t really think about exactly what I wanted to do otherwise.

The one main thing that I decided about a week ago, is that I wanted my physical blog to be more simple and clean looking. In comes my new banner ! On the spot when I decided that I wanted a new layout, the first thing I started to do is research custom blog designers because eventually that is the goal. I am pretty sure I have a company picked out for the future but as I couldn’t afford it right away but I was itching for change I decided just to put a lot of work into making a new banner image that I like. As you can see, the spot for a banner on my blog is huge, keeping that in mind I didn’t just want a logo and then a lot of blank space so I decided to create a spot where an image from my latest look will go showcasing the look. I think this just shows more of the look in it’s entirety since the boxes showing all of the posts is smaller and doesn’t allow for you to see the whole thing most times. Also, instead of doing  plain white I decided to go for some very light marble to give it something extra. So what do you think of it !? Do you like it better than the last one ?

I would love to hear your feedback ! 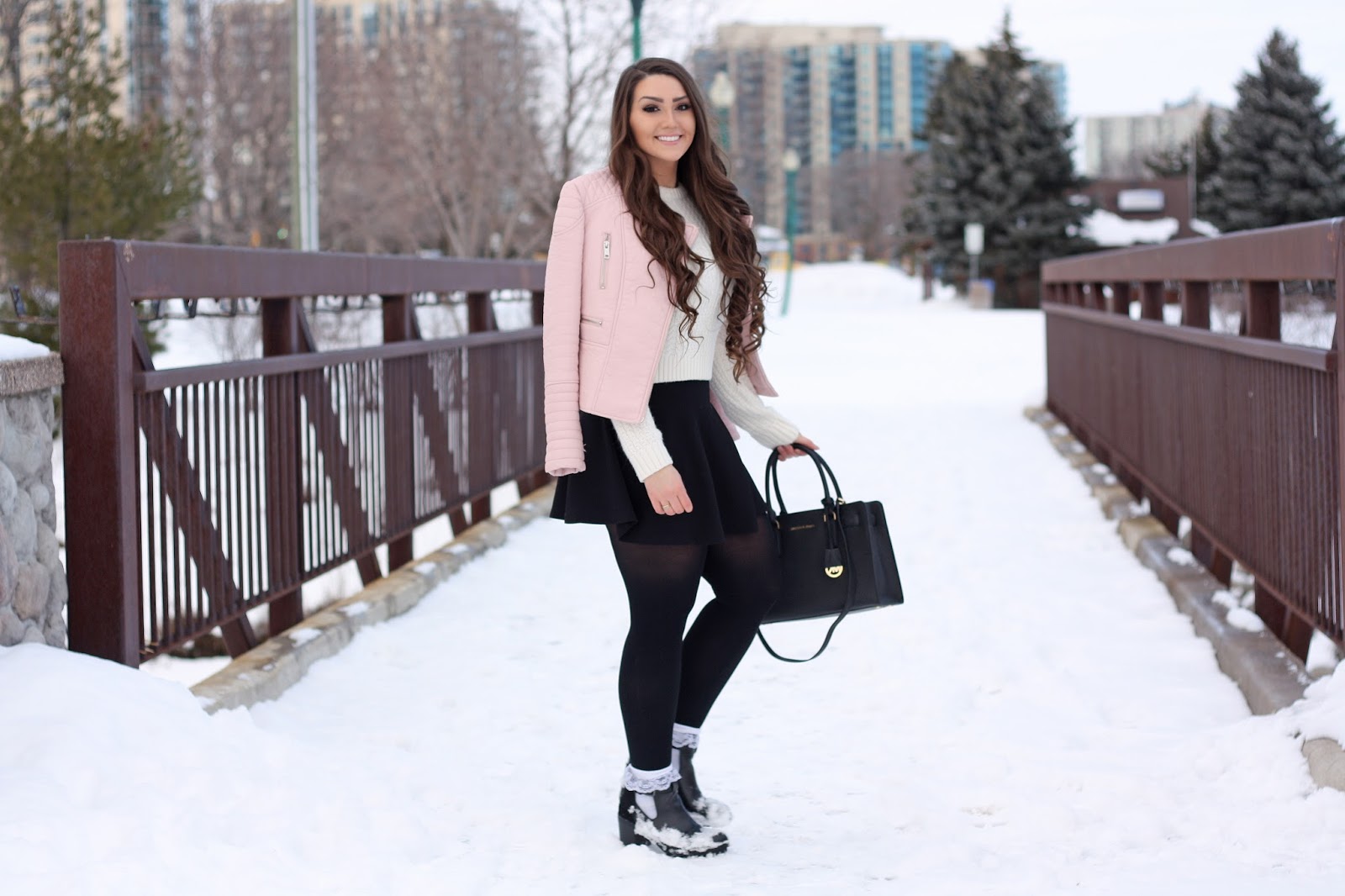 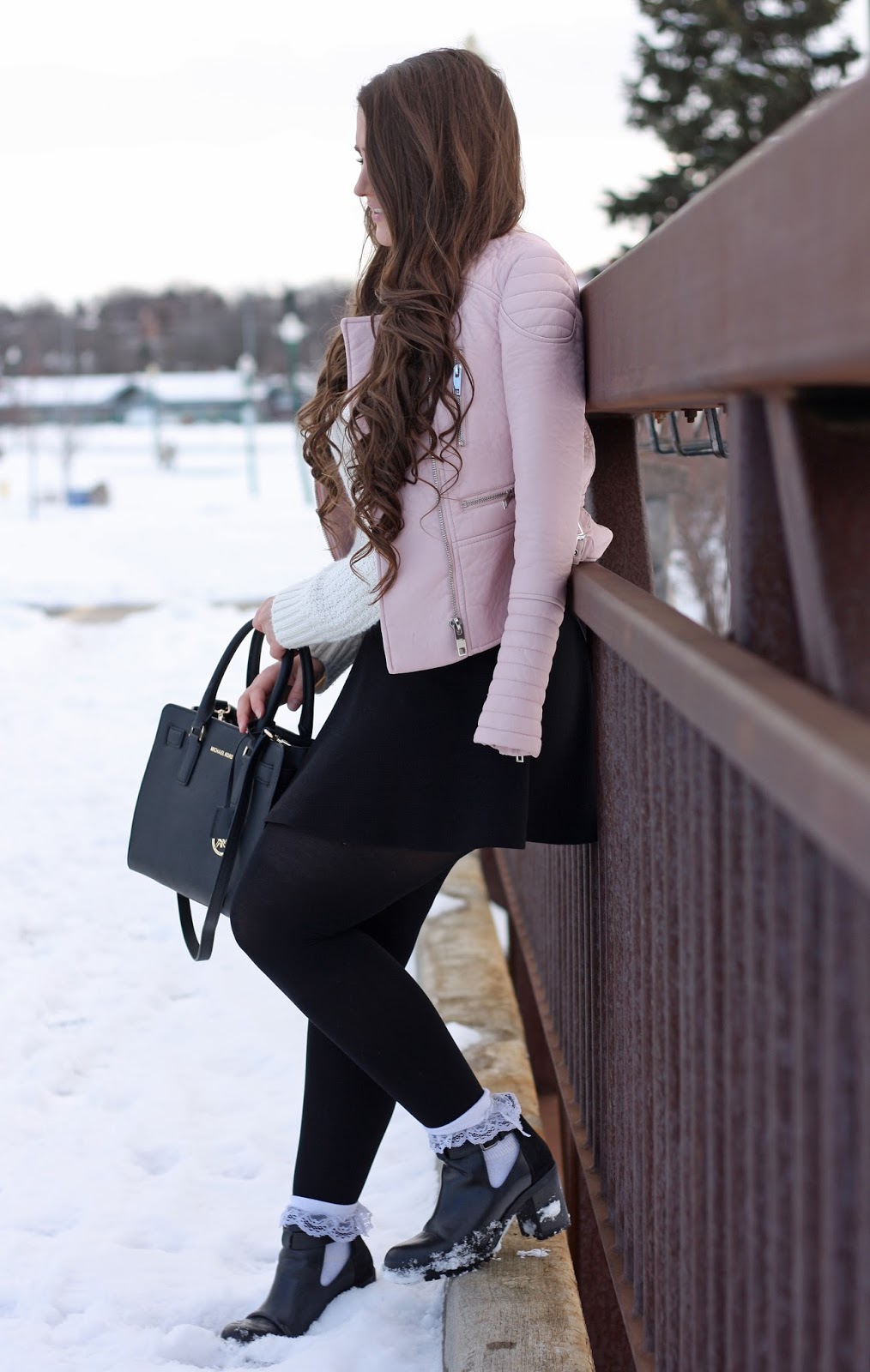 Now, onto the look haha, sorry about the rambling. The day we shot these photos I had to work later on but still wanted to shoot some quick outfit photos, so we decided to go for a little stroll along the lake as it wasn’t a super cold day. The spot we ended up taking the photos at was this bridge which you may remember from this post two years ago, except it was summer and there were flowers everywhere. It is a completely different atmosphere in the winter and so we decided to shoot there because it is still gorgeous in the winter as well (not assss pretty, but that’s okay). Finishing off our walk we also shot a few photos very quickly in the parking lot which turned out to be some of my favorites because as you can probably tell from my new banner I really like grey and white together. It was also extremely bright this day, and I was practically snow blind, my eyes kept watering and it was just not a fun time so if I look in pain in any of these photos, I probably am. 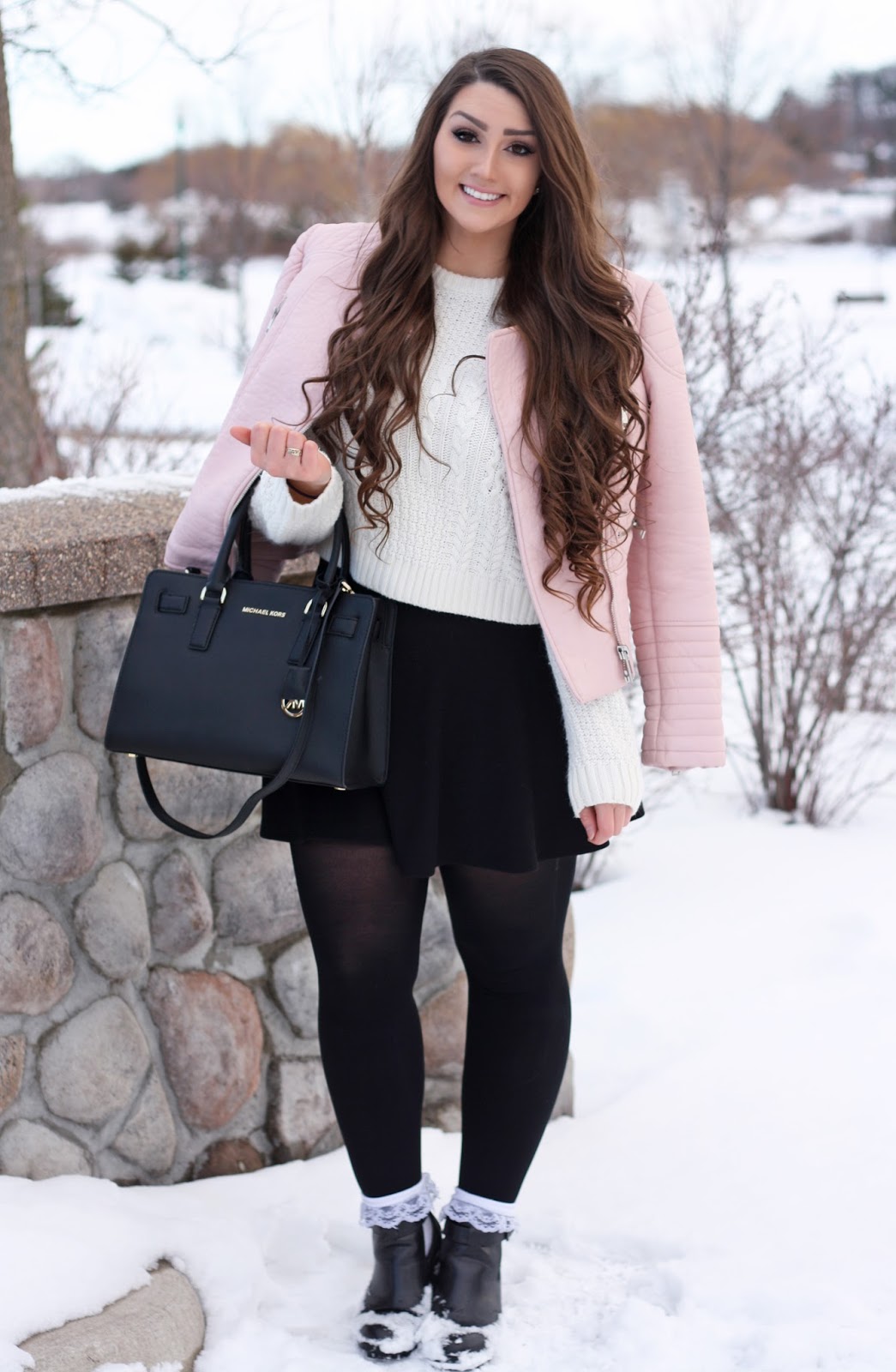 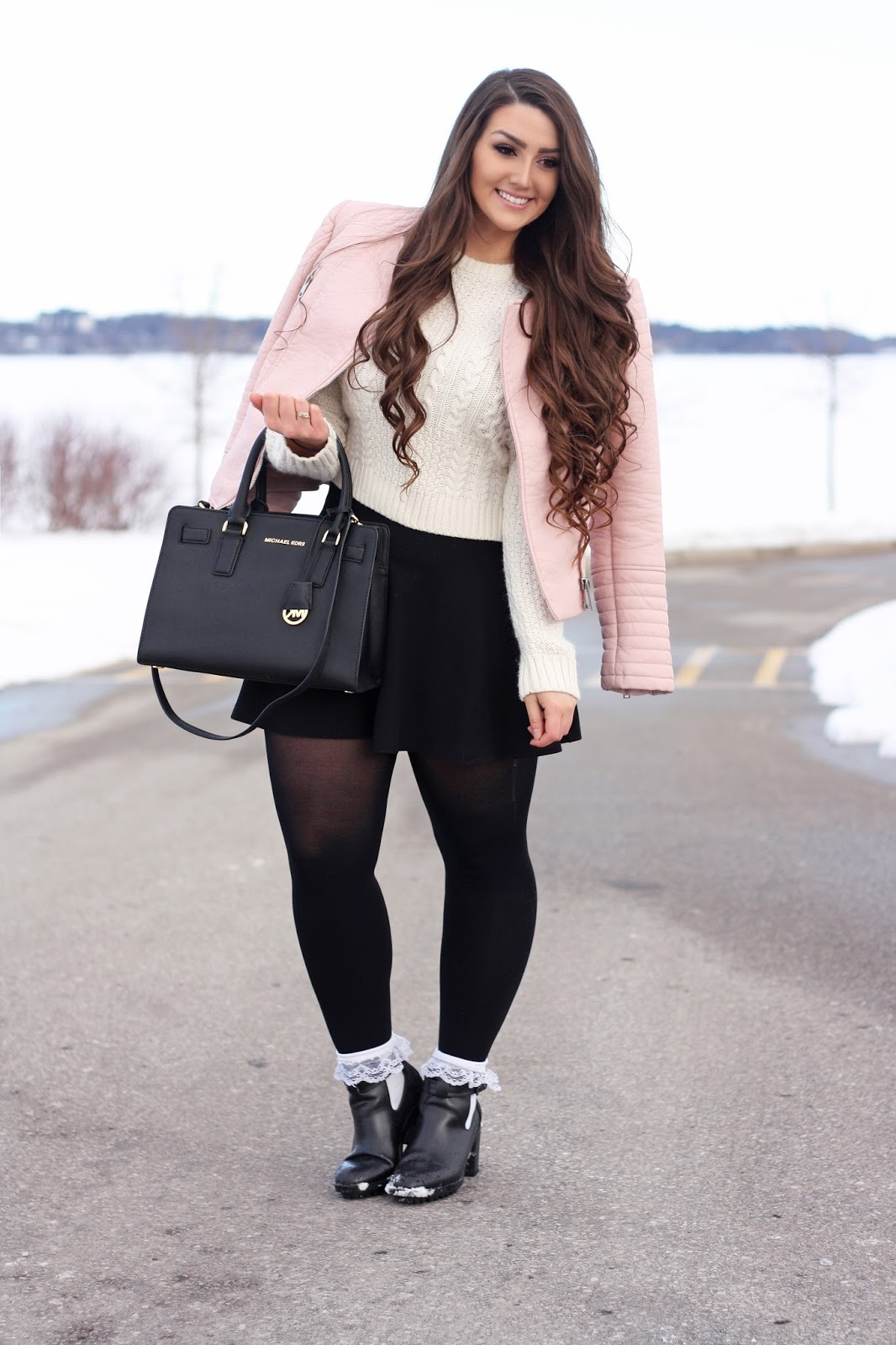 As the colder months roll in, most of us tend to stick to black, white and greys. Although I do love wearing monochrome colors as a lot of us fashion addicts do, I also love to throw in a pop of color, specifically pastels every once in a while. Wearing pastels in the winter is nothing new, it has been trendy for years but with saying that it is sometimes hard to find a way to wear them without looking like it is spring. With this look I decided not to throw on my big fluffy coat, but instead to wear this pastel pink moto jacket that you have seen many times before. Now, you are probably thinking ” what? you just said not to look too springy but your wearing a moto jacket in the snow ” I know, it’s not traditional but with the cable knit, tights and boots it makes it an overall warmer look and acceptable to throw on a “lighter” third piece (this jacket is actually very warm though). 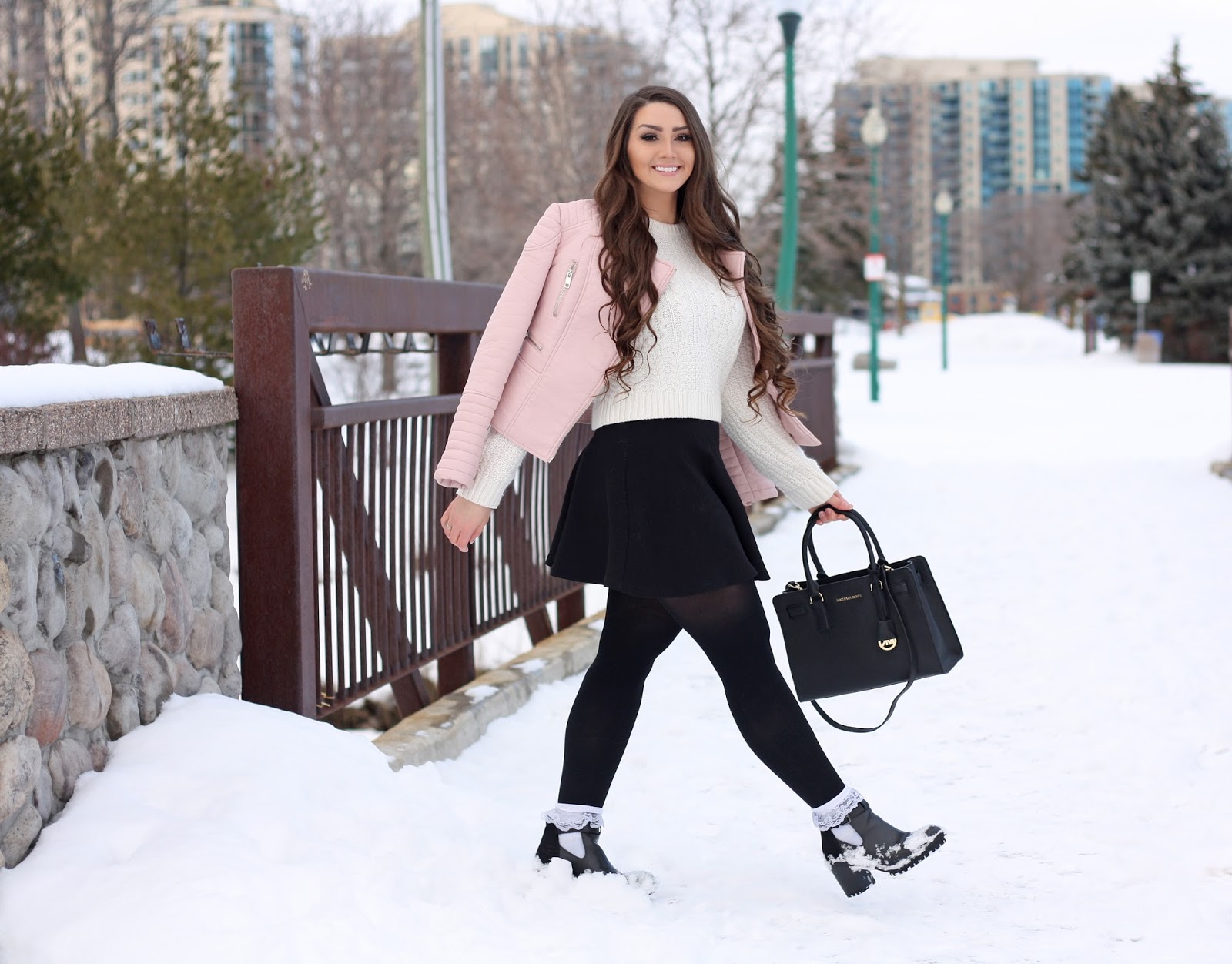 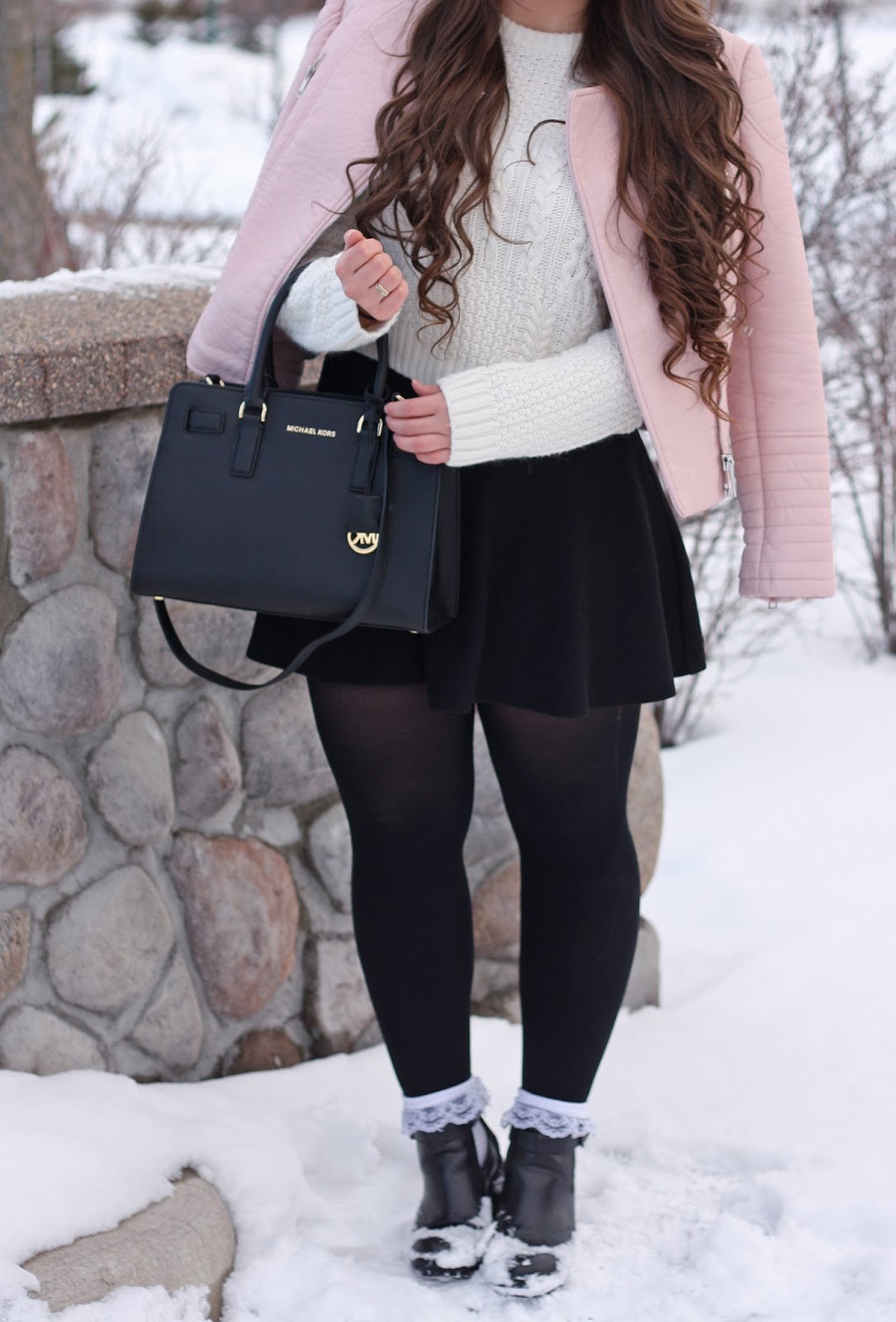 Pastels always seem very feminine to me, for good reason, they are soft and ladylike and are usually found on more feminine clothing pieces. Although this jacket isn’t actually very feminine besides the color, I decided to play off of that and added these frilly lace white socks peaking out of my more edgy chunky boots. These socks always remind me of little girls, probably because I wore them so much when I was little with all of my cute dresses (fun fact: I wouldn’t wear pants until I was about 8) there is just something so youthful and fun about them that I wanted to add into this outfit. I wasn’t sure about them at first, but it is probably one of my favorite things about this look and I will definitely be wearing this combo a ton in the future. I really love how this entire look turned out though, if I were to compare it to anything I would say “Ski Barbie” even though it isn’t very practical for skiing. Pastels in the winter just always remind me of skiing… no idea why. 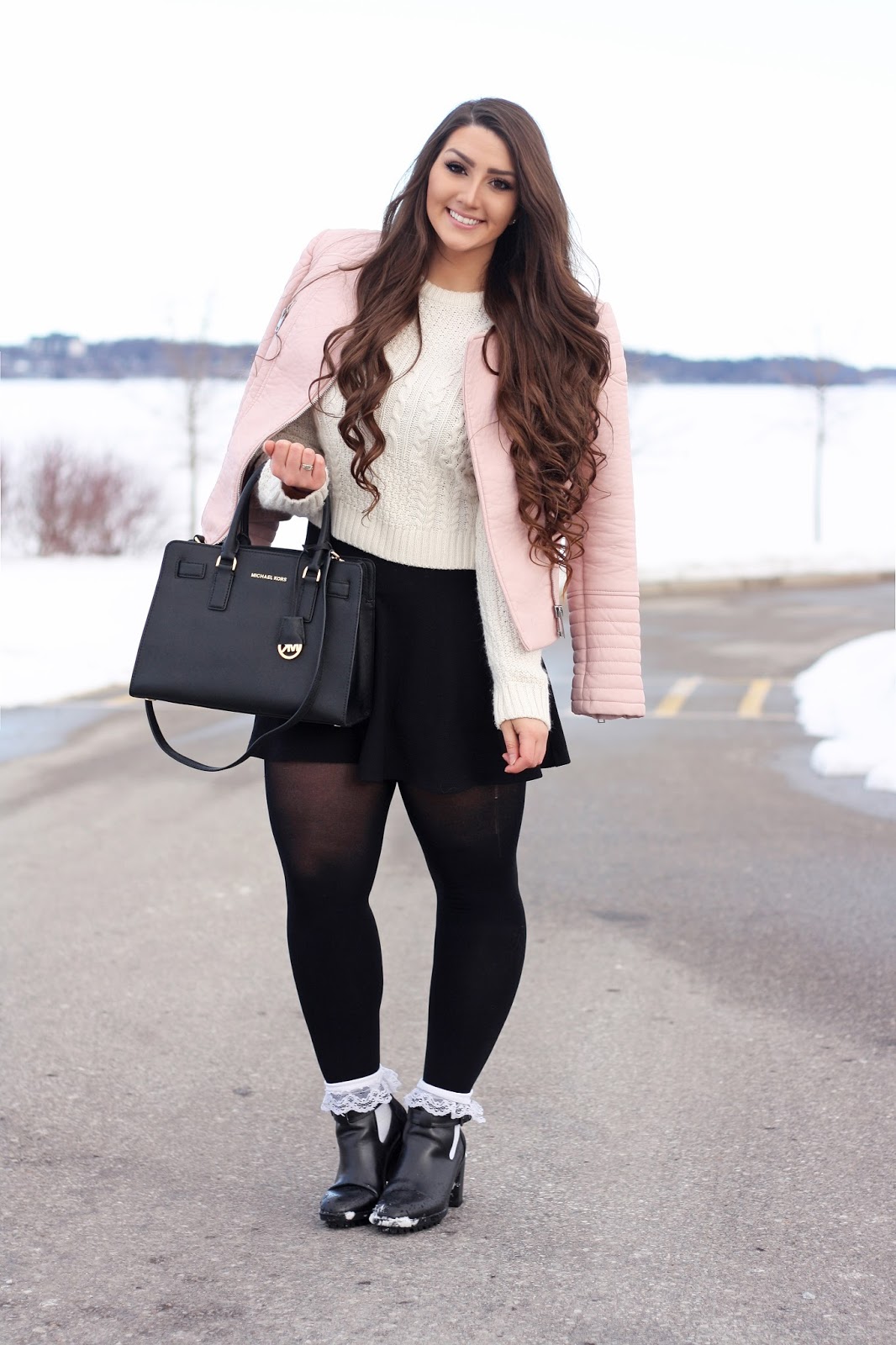 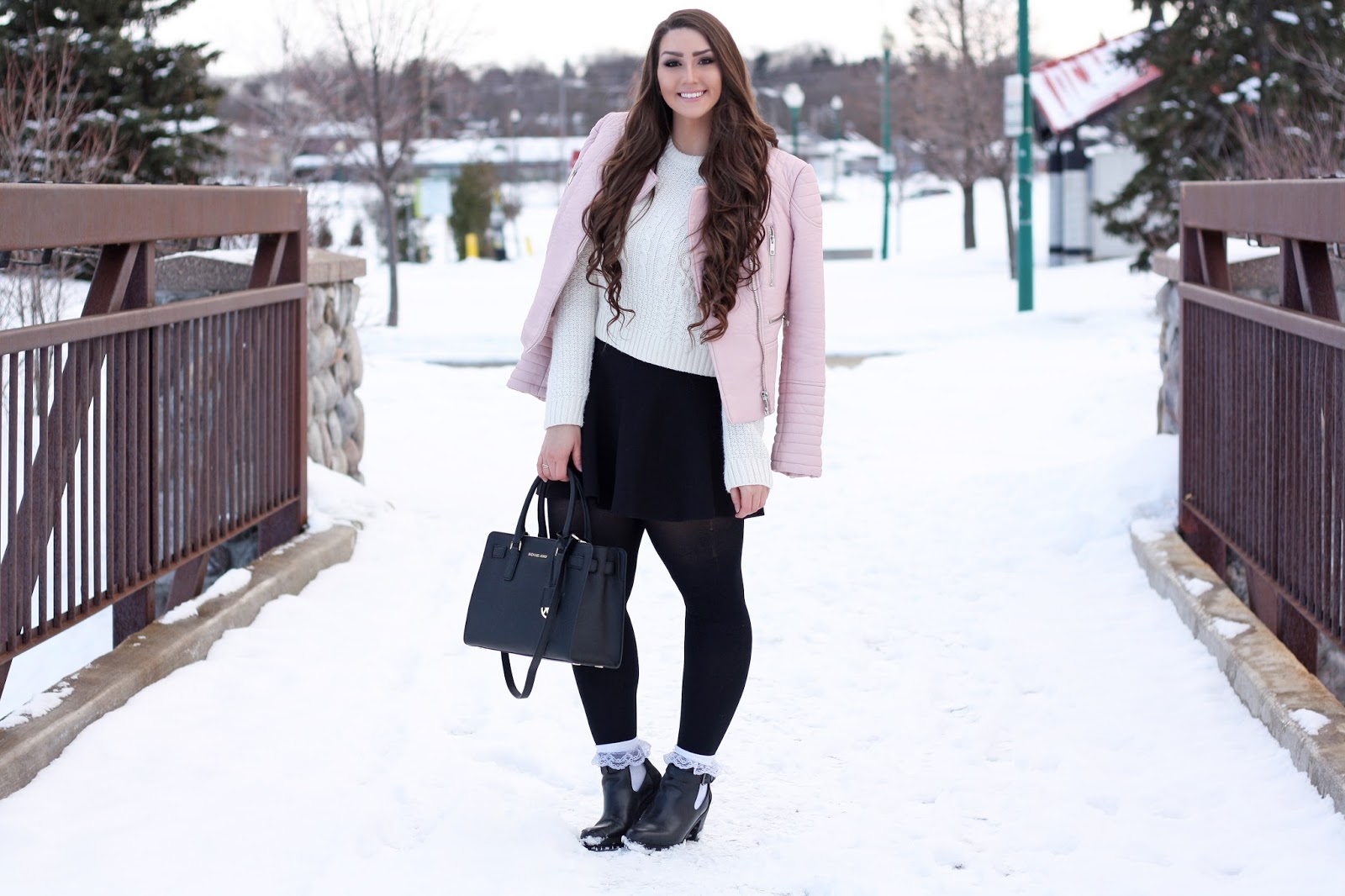 Now, I want to apologize for using my new purse in this look again but I just love it so much it hasn’t left my arm. The next look I just shot does not include it haha, so you will have some variety but I am sure you will see it in a lot of outfits coming up so I am just saying sorry now because I know it gets repetitive, but it is what I actually use so at least I am being real with you haha ! I hope you all have a wonderful week as well, I have some fun things coming up in the near future that I am excited to share with you so keep on the lookout !

How do you feel about pastels in the winter ? Do you love them as much as I do?

Also, do you like the new banner !? I would love to hear what you think !

Thank you so much for reading, I appreciate every one of you <3